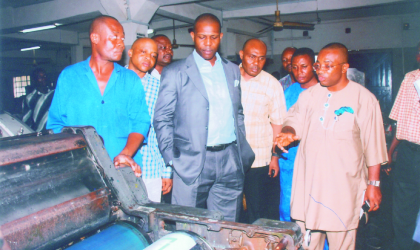 About one billion naira (N1bn) federal government counterpart funds for the Universal Basic Education (UBE) programme in Rivers State is now trapped in Abuja as a result of the abandonment of UBE/ETF projects in Rivers State.

The Tide learnt that  most school projects awarded between 2007 to 2009 were abandoned by contractors some of who were paid mobilization fee upto the tune of 70 per cent.

This situation prompted a recent delegation to the state to score the state board of the UBE 40 per cent in terms of performance.

Addressing the contractors during a meeting in Port Harcourt, the executive chairman of the board, Sir Ali Oruitemeka urged the over 92 contractors involved in the incident to go back to site immediately.

Sir Oruitemeka said that the board will not hesitate to invoke the relevant sections of the law against them, as their attitude is affecting the implementation of the programme in the state.

According to him, the Federal Government expects some milestones before the money is released.

He also urged them to put the interest of the state above personal interest in the execution of the projects.

Also speaking, the board member I RSUBED, Hon Lucky Worlu said that the meeting was meant to find out areas of problems with a view of finding solutions to them.

According to him, the meeting was inline  with the principles of  fairness, transparency and objectivity adopted by the  Amaechi administration, noting that the overall objective is to improve the quality of education in the  state.