Central Bank of Nigeria (CBN) officials have found that a managing director of one of the troubled banks whose shareholders have strong political connections allegedly allocated to himself share capital of N85 billion which has not been paid for.

The said MD was alleged to have allocated shares to a local airline to the tune of N18 billion as corporate investment. Although the airline has already denied any knowledge of the  deal, and allegedly invested N12 billion depositors’ funds in a supposed subsidiary of the bank.

These disclosures follow the  conclusion of the latest audit on the 14 troubled banks and  has already sparked fear in the financial sector.  It is believed that the CBN examiners concentrated on liquidity, loan verification such as loans to stock brokers, petroleum products importers, performing and non performing loans; corporate governance issues; processes and resources spent on information technology.

It was gathered that the apex bank is yet to conduct what they described as forensic accounting investigation on any of the 24 banks in the country.

Bankers are of the view that two or three banks may be affected by the decision of  the CBN Governor, Mallam Sanusi Lamido not to allow family banks in the country. They are of the view that the CBN governor’s policy frame of mind to end family owned banks may have been partly responsible for the fate of Oceanic Bank and Intercontinental Bank which are seen as being dominated by the personality of their managing directors.

Sanusi had while briefing capital market operators on Wednesday warned that he would not allow banks to be run as a sole proprietorship but as institutions that would imbibe the tenets of good corporate governance, promising to treat shareholders of the affected banks fairly and also ensure that, henceforth, banks in the country are run as institutions rather than as a sole proprietorship.

Sanusi at that briefing allayed fears of nationalising the five troubled banks whose managing directors and executive directors were sacked following alleged misuse of shareholders’ funds.

The CBN governor said that the results of the remaining banks would be made known in next  month, but noted that their results would be better than those of the 10 banks examined earlier from which five were hammered.

Last month, the CBN sacked managing  and executive directors of Afribank Plc, FinbankPlc, Intercontinental Bank Plc, Oceanic Bank Plc and Union Bank Plc. The examination was conducted by a joint team of CBN and NDIC officials. The major findings on the five banks included according to the CBN were:

Excessively high level of non-performing loans in the five banks which was attributable to poor corporate governance practices, lax credit administration processes and the absence or non-adherence to the bank’s credit risk management practices.

Thus the percentage of non-performing loans to total loans ranged from 19 per cent to 48 per cent. The five banks will, therefore, need to make additional provision of N539.09 billion.

The total loan portfolio of these five banks was N2,801.92 billion. Margin loans amounted to N456.28 billion and exposure to oil and gas was N487.02 billion. Aggregate non-performing loans stood at Nl,143 billion representing 40.81 per cent. 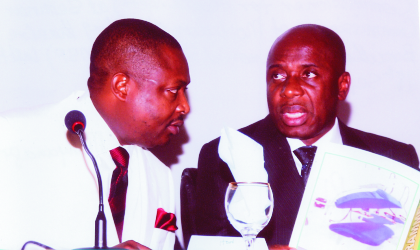