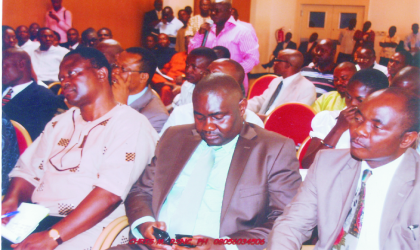 Executive Director of the Rivers State Sustainable Development Agency (RSSDA), Mr Bolaji Ogunseye has identified what he hinted as frivolous spending by Federal Government which gulps about N1.3trillion annually.

Mr Ogunseye, who was the guest speaker at yesterday’s 25th Annual General Meeting (AGM) of the Manufacturers Association of Nigeria (MAN), Rivers/Bayelsa states branch, held at Delta Hotel, Port Harcourt said such expenditure include those as aides to top government functionaries and their cronies.

According to him, such expenditures do not contribute to any form of economic advance, adding that the situation also extends to government at all levels , hence Nigeria operated a “collect and spend economy”, with little or no consideration for the manufacturing industry, which is the mainstay of any development-minded country.

The RSSDA boss explained further that because of the seeming innate tendency to only collect from government giving little in terms of being productive in manufacturing of products, most Nigerians are poor.

‘Nigeria’s economy is defined by non-production…I want to tell you that as far as I’m concerned, we have a non-economy”, he said , adding that this is so because the country has neglected the manufacturing industry’, which is at the very heart of production”.

He said rather than having what could be termed an economy, Nigeria has what he christened “ economy of affection in which those in authority spend money based on affection instead of on viable economic development ventures as education.

Listing the solution to the situation in order to achieve the vision 2020, Ogunseye said the solution is “ doing the right thing, doing things right and doing it at the right time, “ in this case, laying emphasis on the manufacturing industry.

In his welcome address, the out-gone chairman of MAN, Rivers/Bayelsa branch, Rev B.F.Wabara called on government at all levels to support MAN in order to enhance economic growth.

While commending the Rivers State Governor, Rt Hon Chibuike Amaechi, and his Bayelsa State counterpart, Chief Timipre Sylva for efforts made so far in providing enabling environment for the private sector, Rev Wabara noted that MAN’s operations had been hampered by several factors.

Such factors, he said, include weak infrastructural base and in efficient public utilities; fake counterfeit and substandard imported goods and dumping; as well as weak capital base and lack of access to funds.

Others are incessant scarcity of petroleum products; multiple taxes and levies; and inconsistent fiscal policy measures by government.

To overcome these challenges, he urged government to support the small and medium scale industries (SMIs) and strengthen government agencies such as BOI, SMEDAN and NAPEP to be more relevant in the area of financial support to SMIs.

Others are creating enabling environment for private sector participation, protecting local industries from foreign competition by encouraging patronage of locally manufactured products and strengthening security agencies to effectively perform their role of protecting lives and properties.

It also include development of infrastructure, particularly power generation and distribution to stimulate growth of the real sector.

Highlight of the AGM was the election of a new chairman, Mrs Emilia E. Akpan.