Since November 2006, the activities of the Proceeds of Corruption Unit within the UK Metropolitan Police Service tracing Nigeria’s embezzled loot have led to £3.5m being seized, £79.8m being placed under restraint and £20.7m being repatriated to Nigeria following criminal and civil proceedings.

In a Freedom of Information request by Ms Funke Obisanya dated 22 June 2009 and made available to Elombah.com asking “how much exactly the total amount of Nigeria’s embezzled loot  the British courts were successful in seizing and how much of it was returned?”

UK Department of International Development, (DFID) confirmed that through the activities of the Proceeds of Corruption Unit within the UK Metropolitan Police Service since November 2006; £3.5m has been seized, £79.8m has been placed under restraint and £20.7m has been repatriated to Nigeria following criminal and civil proceedings. However, UK Department of International Development said this amount is not comprehensive.

On Sani Abacha, the report said, the extent of the misappropriation of public funds by General Sani Abacha, the military dictator of Nigeria between 1993 and 1998, is notorious. In the Global Corruption Report for 2004 issued by TI, Abacha was ranked fourth in the list of all-time political kleptocrats behind Suharto, Marcos and Mobutu, but ahead of Milosovic, Duvalier and Fujimori. A total of US $1.3 billion is believed to have passed through accounts in British banks controlled by the Abacha family.

The Nigerian authorities have made substantial recoveries – most notably from Switzerland, which has repatriated over US $500 million, and also from the return of funds during the initial domestic investigation into the misappropriations123.

However, there has also been a significant recovery through proceedings brought in the UK, and MLA in support of Nigerian criminal investigations124.

Civil proceedings: Approximately £110 million was recovered from the UK in civil proceedings brought by Nigeria, proceedings that arose from the buy-back of debt owed by Nigeria for the financing of the construction of the Ajaokuta Steel Plant in Nigeria’s Kogi State. The Abachas exploited the buy-back transaction corruptly to enrich themselves, using an offshore company to acquire the debt from Russian entities who then sold the debt to the Nigerian Government for twice the sum it had paid. The Abachas’ profit was approximately DM 500 million (£166 million), held in a London bank account.

The case was complicated by a claim by a third party that it had in fact been the true owner of the debt having, it was said, acquired it from the Russian entities prior to its purported sale to Nigeria.

Settlement discussions: At the conclusion of a series of meetings, Nigeria believed that the case had been settled and that the Abachas’ would pay the bulk of Nigeria’s claim. Within days, however, disputes arose as to whether and on what terms the parties had settled. This led to a trial before the English Commercial Court to decide whether the actions had been settled, and if so, on what terms. That trial lasted for six months and led to judgment in Nigeria’s favour125, a decision upheld on appeal.

Mutual legal assistance: The United Kingdom also provided MLA in support of the Nigerian criminal investigation into the Abachas, albeit at a slower pace than would be expected today.

A request for assistance was made by Nigeria in June 2000 and evidence gathered by the SFO was sent to Nigeria in 2004, following a legal challenge by the Abachas to the decision to assist the Nigerian authorities.

Further civil proceedings: In September 2001, Nigeria brought civil proceedings in London against about 120 defendants alleged to be involved in the misappropriation of funds by the Abachas.

The proceedings started with applications for disclosure of documents and information by a number of banks, and an application for a worldwide freezing injunction against the Abachas. On 25 September 2001, the Court granted the orders sought by Nigeria. However, although US $1.3 billion passed through London banks, only a relatively small sum is believed to have remained.

The proceedings have not progressed, although the worldwide freezing injunction remains in place. 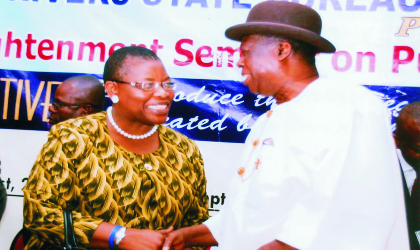