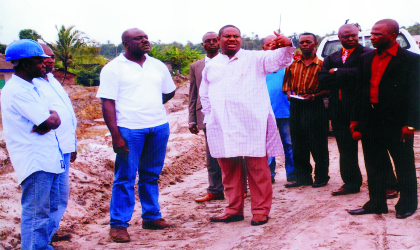 The Rivers State Government would soon present staff of office to about 12 traditional rulers in the state in whose domain there is no opposition to their stools.

The Commissioner for Local Government and Chieftaincy Affairs, Hon Tammy Danagogo disclosed this yesterday at The Tide Roundtable, a weekly personality interview programme of the Rivers state Newspaper Corporation.

Among the traditional rulers are the King of Unyeada in Andoni Local Government Area and the Olema of Odual Kingdom, Temple Jamalla II.

The commissioner also said that the government would set up a chieftaincy review committee to look into the issue of reclarification of some chieftaincy stools in the state.

Hon Danagogo also said that chieftaincy matter accounts for 50 per cent of community crises in the state, noting that because of its volatile nature, the issue is being handled with care by the government.

He also said that his ministry has taken some far reaching measures to check crises in communities in the state.

Some of these measures according to him include the regulation and strengthening of the chieftaincy institution and the community governance structure through the setting up of organs such as the community development committees (CDC), Rural Development Council (RDC) and the  Community Trusts (CT)

Dr Danagogo, however blamed the crises in most activities of those who lost out in chieftaincy tussle.

According to him, some people who lost out in such contest have been unleashing terror in their various communities, but noted that the state government is doing everything within its powers to ensure that all part of the state remained in peace.

Speaking on the Ibaa crisis in the Emohua Local Government Area, the commissioner said that the government is taking some steps to bring the crisis to an end.