The Coalition Against Corrupt Leaders (CACOL) has urged the Economic and Financial Crimes Commission (EFCC) and other anti-graft agencies to parade all persons and institutions that are responsible for the travails of the five banks whose Chief Executives and Executive Directors where sacked the previous week by the Central Bank of Nigeria (CBN) to serve as deterrent to others.

The anti-graft Coalition of Civil Society Organisations noted that naming of those behind non-performing loans that caused the collapse of the frontline financial institutions is not enough but shaming and nailing them according to the law .

CACOL noted in a statement at the weekend that “the indicted persons and institutions that have for so many years deceitfully denied ordinary Nigerian citizens access to capital and honest loans to do their honest businesses that would have earned them decent living conditions should not be treated with better respect than are accorded common criminals that are daily paraded in chains by the EFCC, the police and other law enforcement agencies”.

The group noted that it is this untowardly acts of the presumed movers and shakers of the society that has turned otherwise honest Nigerian youths into criminals of all descriptions who make security of lives and properties of the innocent a mirage in their homes and on highways while their real tormentors fly around in private jets and move with myriads of security aides and bodyguards.

Noted CACOL “It is necessary for victims of these financial vampires to see faces of their adversaries in the media in handcuffs while sitting on bare floor so that when they appear in various communities, Churches and Mosques to donate billions of naira their victims and potential victims will despise, mock and pelt them with rotten tomatoes, sachet of water rather than welcome them with the usual pomp and pageantry”.

These people, according to CACOL “have committed offences that transcends economic and financial crimes but also crimes against humanity since their deeds or misdeeds would have sent many, including babies, pregnant women and other hapless citizens who could have contributed the mismanaged funds through their savings in banks, taxes etc to their untimely graves”.

Observed CACOL, “It is unfortunate that some managers of fraud who sometimes parade themselves as part-time clergymen (and women) junket about town in private jets (to show off what absolute opulence they live in) are allowed by anti-graft agencies, who are empowered to question sources of their astounding wealth, to dazzle ordinary citizens, who may be members of their congregation or constituencies but cannot afford to ride bicycles into further psychological agony with their display of unearned inordinate prosperity”.

“The present democratic experiment”, CACOL observed, ‘has only brought more agony to Nigerians than relief.” According to the Coalition, “the former and the present civilian administrations during the present republic have only worsen the condition of living of the average Nigerian in all areas that can be thought of – power, energy, education, health, economy, security or transportation etc”.

Quoting the Secretary of State of the United States of America, Mrs Hillary Clinton who said during her visit to Nigeria two weeks earlier that, “Today I am in Nigeria, a Country that produces 2 million barrels of oil a day, has the seventh-largest gas reserves of any country in the world but according to the United Nations, the poverty rate in Nigeria has gone up from 46 percent to 76 percent over the last 13 years”, the group noted that ten of those thirteen years were spent under the aforementioned regimes of both Chief Olusegun Obasanjo and Alhaji Umaru Yar’Adua.

CACOL finally urged the EFCC not to allow anyone of the culprits in this BankersGate go unpunished.

The Coalition seized the opportunity to remind the EFCC that CACOL had once commended the agency for securing about 70 convictions, and recovered about N50 billion within the first year of Madam Farida Waziri in office to show the Coalition’s solidarity with the agency in contrast to the scathing criticism it receives from several quarters.

It however warned that the Coalition will call its members out on the streets in procession to shame the EFCC should it fail to adequately shame the bad bank managers, bad bank debtors and their accomplices who have caused ordinary Nigerians so much misery by ensuring that they face the fullest wrath of the law. 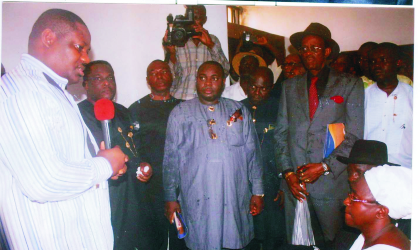 The Coalition Against Corrupt Leaders (CACOL) has urged the Economic and Financial Crimes Commission (EFCC) and other anti-graft agencies to parade all persons and institutions that are responsible for the travails of the five banks whose Chief Executives and Executive Directors where sacked the previous week by the Central Bank of Nigeria (CBN) to serve as deterrent to others.