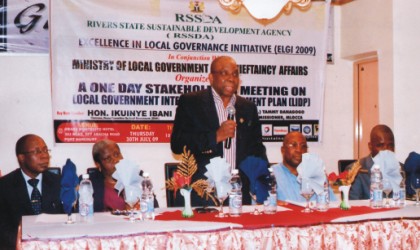 The Rivers State Government has reacted to reports and insinuations in some quarters that the state is not disposed to the Federal Government’s amnesty to repentant militants.

In a statement, Acting Press Secretary to the state Governor, Blessing Wikina, said the State Government’s Peace Plans was initiated many months ago with the establishment of a fully-funded Rivers State Social Rehabilitation Centre (SRC), located at Okehi in Etche Local Government Area of the state, for the training and rehabilitation of genuinely repentant militants.

The centre, the first of its type, by any state, in the entire Niger Delta Area, commenced before the formal proclamation of Amnesty by Mr President, the statement said, adding that the Social Rehabilitation Centre (SRC) is headed by a former national security boss in the country, Chief A. K. Horsefall, and to date over 300 ex-cultists have been trained, rehabilitated and empowered to further their new life within the communities, the statement said.

The statement noted that Governor Chibuike Amaechi had stressed it in several public fora a that he was not against the Federal Government’s Amnesty and would do his best to make it succeed.”

It is the fervent belief of the state government that those who find joy in heating up the system by making unfounded allegations are only demonstrating how frustrated and inordinate ambition could drive their excesses, the statement said.

“The Rivers State Government is definitely grateful to President Shehu Musa Yar’Auda and the Federal Government for their commitment towards the resolution of the Niger Delta crises” the statement added.

While the state government wishes to reinstate its position to further assist all processes that would lead to the peaceful co-existence of the people of Niger Delta, it calls on Rivers people to remain focused and supportive of Government as it is determined to develop the state’s human capital and infrastructure irrespective of pressures from detractors.