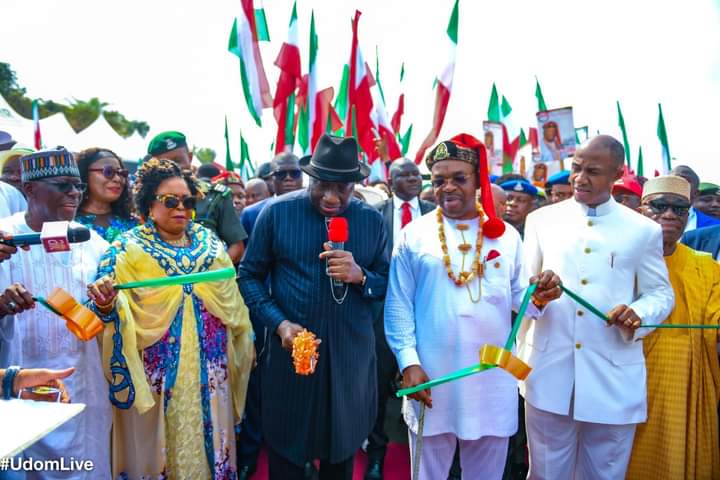 Akwa Ibom State Governor, Udom Emmanuel, has cautioned the political class to avoid actions capable of threatening Nigeria’s unity as they canvass for votes in the forthcoming general elections.
Emmanuel gave the warning in his remarks on Sunday during the 2023 Armed Forces Remembrance Day celebrations in Uyo.
He said that the nation must appreciate and redouble efforts in showing undying gratitude to the families of the slain armed forces and war veterans.
The governor called on Nigerians from all walks of life to outgrow diversity and deepen their unity among one another in appreciation of the sacrifices the fallen heroes paid for the nation.
He urged Nigerians to extend the frontiers of love and brotherhood further, so that the sacrifices of the gallant officers and men of the Nigerian Armed Forces will not be in vain.
“We are gathered here today, for this deeply solemn annual event to honor the sacrifices, patriotism, and gallantry of our proud men and women who wore our military uniforms, bore arms, and went out, motivated mostly by the ennobling spirit of volunteerism to fight for our country and in the process helped secure the peace we now enjoy.
“Today, the seed of our freedoms, the building blocks of our territorial integrity, the pillars of our unity, however fragile, were secured through the blood of these patriots.
“Our diversity which should form a rainbow of strength is being exploited for narrow political advantage, while zero-sum game tactics are still being employed and deployed all over the nation.
“As we get ready to elect our new set of leaders, I urge our political class to understand that we need the country to be one indissoluble entity, for our aspirations for leadership to be actualised.
“We must not threaten the unity of this nation for the narrow desire to be in power, if these gallant men and women paid the ultimate price for us to remain in peace and harmony.
“We must also pay them a corresponding price of appreciation and gratitude by ensuring that the cords of our unity, justice, equality, fairness, and love remain our abiding articles of faith,” Emmanuel said.
Emmanuel said that the duty of supporting the gallant patriots should be a collective responsibility and not to be left for governments alone, stressing that it was not enough to remember the date without enough support to the war veterans.
“We must improve the welfare of our soldiers, ensure that they live in decent environments, and guarantee a future of growth and development to their children, who oftentimes bear the brunt of the sacrifices their fathers made in the service of the nation,” he said.
The governor said the State Government over the years has continued to support the military formation located in the state in area of infrastructure and welfare.