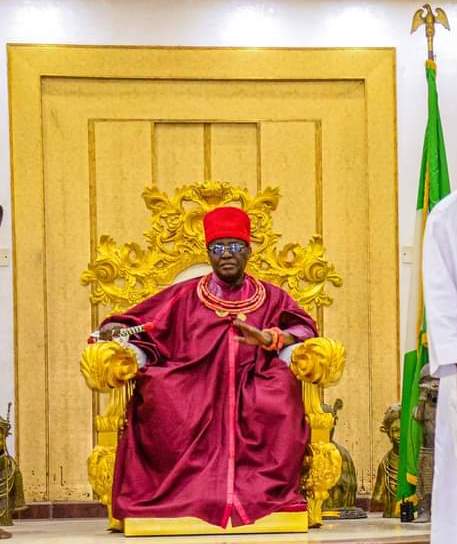 The new year day solidarity walk of Oba of Benin, Oba Ewuare II, shut down the city on Sunday as fun seekers were seen in snaking queues to catch a glimpse of the king.
The Sunday afternoon walk to the palace started after the Thanksgiving Service at the Holy Aruosa Cathedral (Edo National Church of God) on Akpakpava street to climax the annual ‘Igue festival.
The traditional ruler staged a similar road walk during his 6th year Coronation Anniversary Thanksgiving in the church on October 23, 2022.
Oba Ewuare II was accompanied by members of the Benin Royal family, Chiefs, Dukes (Enigie), Benin residents, worshippers in the church and palace functionaries during the procession.
The royal movement went through the Oba Ovonramwen Square, where fun-seekers at the National Museum and traders in the locality trooped out to pay homage to the king.
Adjoining streets, linking the King Square, were temporarily locked down during the procession by the Oba, who doubles as the spiritual leader of the Church, amidst cultural dance, cheers and songs of oration eulogising him.
During the Church Service, Oba Ewuare II, with members of the Royal family and Oloi (Queens), gave thanks to God and the ancestors.
In a sermon titled, ‘Iwero’ (Greedy people), the presiding Priest of Holy Aruosa Cathedral, Ohen-Osa Edebiri Igbinoghodua, cautioned agitators for secession.
He said the people, including some Dukes (Enigie) involved in “outrageous activities” in Benin Kingdom, must retrace their steps in order not to incur the wrath of God and ancestors.
Igbinoghodua also advised groups allegedly involved in conspiracy to administer certain areas in the Benin Kingdom on behalf of the Oba, not to divide Benin Kingdom.

Diri Assures On Better Days In 2023