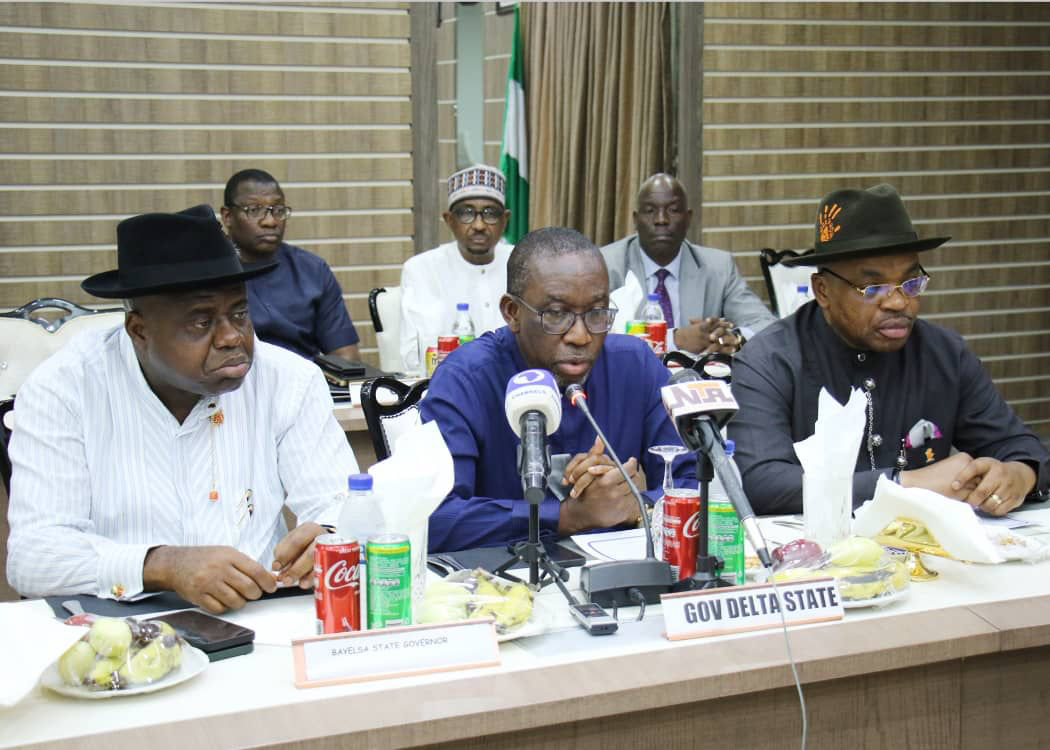 The Presidential candidate of the All Progressives Congress (APC), Bola Tinubu, says he will address the infrastructure deficit in the riverrine communities in Delta State.
Tinubu gave the assurance, last Friday, while addressing the people of Gbaramatu Kingdom in Warri South-West Local Government Area of the State.
The former Governor of Lagos State and his entourage were hosted by the King of Gbaramatu Kingdom, Oboro Gbaraun II (Aketekpe Agadagba) Pere of Gbaramatu.
Tinubu addressed the crowd of party leaders and supporters at the pavilion in Oporoza, Administrative Headquarters of Gbaramatu Kingdom.
The APC presidential candidate said he would not be far from the people of Gbaramatu Kingdom as President of Nigeria, promising that they would be carried along.
“You mentioned the roads, Sea ports, the Nigerian Maritime University (NMU), Industrial Park. I assured you that all these and more will be taken care off.
“As promised, we will not be far away from you; we will carry you along and consult with you regularly; we will encourage you and keep to our promises.
“Our brothers here, we will embrace them for the development of the area; the community of Gbaramatu and other associated communities,” he said.
Describing himself as the renewed hope for Nigerians, Tinubu said his administration would be premised on economic development, progress and jobs creation for youths.
He urged his opponent in the presidential race, Alhaji Atiku Abubakar of the Peoples Democratic Party (PDP) to go and rest noting that he had ran for the position for too long.
“There are few of us left running the presidential race. One said he is Atiku. How many times has he been running?
“He is always on the run and he is tired, tell him to go and sit down, enough is enough,” Tinubu said.
He urged the King of Gbaramatu Kingdom to ensure that oil facilities in his kingdom were well protected from vandalism.
“Please pay attention to the dangers of the destructions of pipelines and petroleum facilities.They are dangerous to our health, the fish and everything you do,” he said.
Also, Sen. Ovie Omo-Agege, the APC Gubernatorial candidate in Delta, said one of the greatest challenges in the Gbaramatu Kingdom was lack of access roads to the mainland.
Omo-Agege promised to address it when he becomes the governor.
“I allude to the king when he said that the greatest challenges they face was access to the hinterland, that we need to have the kingdom bridged to the mainland.
“It is request that I will pursue as incoming governor with the incoming President, Tinubu, by the grace of God.
“I am familiar with this kingdom; the issue of the full implementation of the NMU.
“We know what the challenges are and I have undertaken those challenges with the National Assembly dealing with the enabling framework.
“Before the election, the enabling framework will be passed and signed by President Muhammadu Buhari into Law.
“We are also addressing the issues of funding with response to NIMASA,” he said.
Omo-Agege urged the people to vote for all the APC candidates in the forthcoming general elections.
Earlier, Tinubu and some members of his entourage were conferred with chieftaincy titles by the King of Gbaramatu Kingdom.
Tinubu was conferred with the title of “Eyeilaowei” of Gbaramatu Kingdom, meaning “man of high esteem” while Omo-Agege was conferred with the “Ebeikiowei” of Gbaramatu Kingdom, meaning one who remembers the kingdom.
Other beneficiaries of the chieftaincy titles were: Timipre Sylva, the Minister of State for Petroleum Resources; Festus Keyamo, the Minister of State for Labour and Employment.
Others were: Abdullahi Ganduje, the Governor of Kano State; Mai Buni, Governor of Yobe, among others.