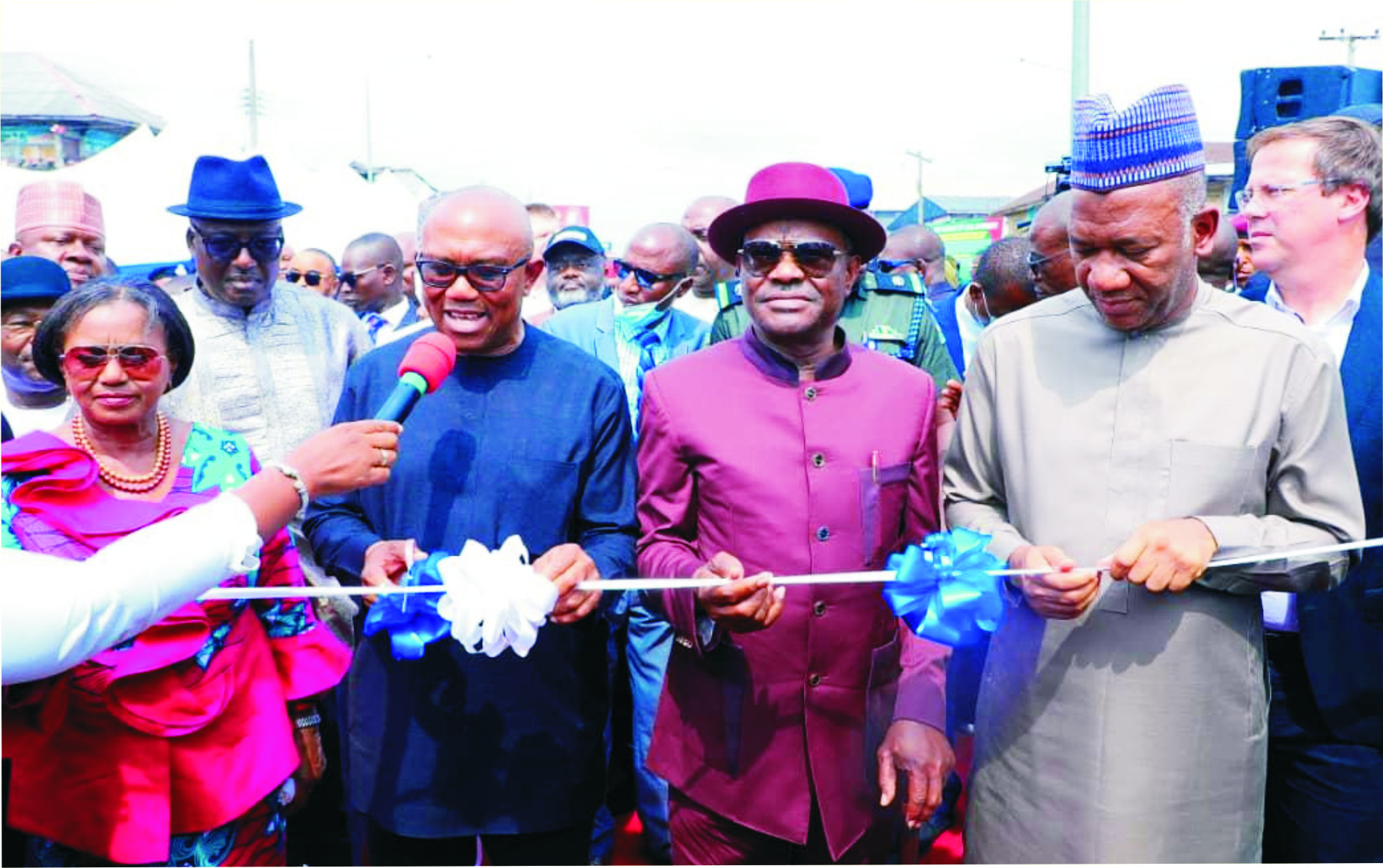 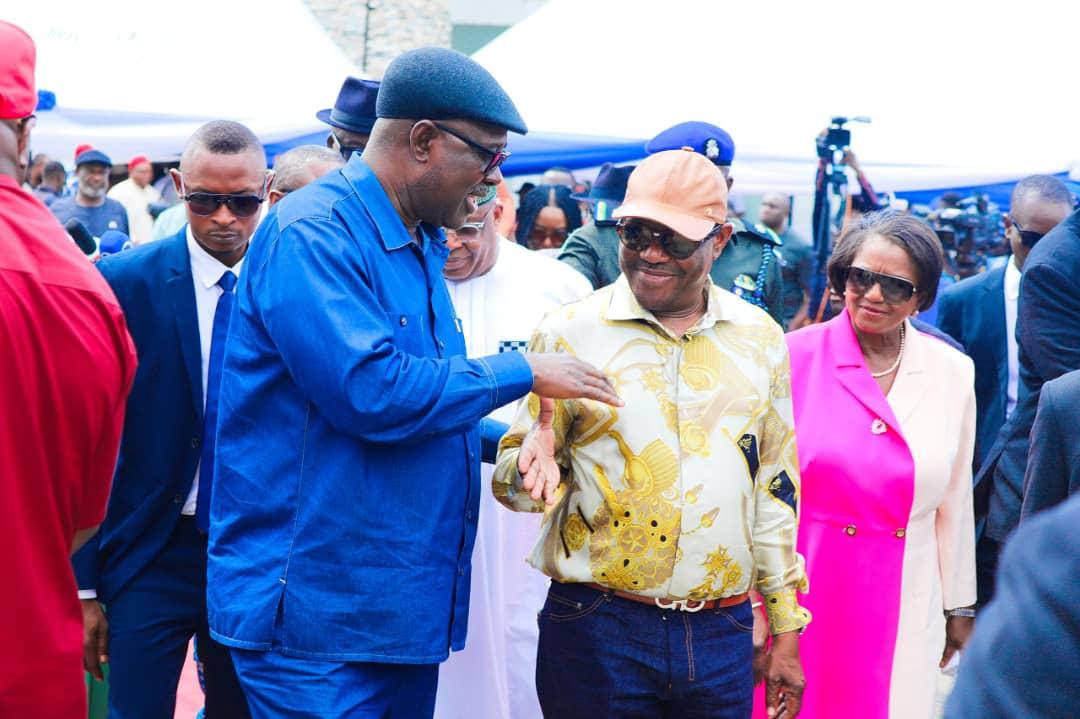 Rivers State Governor, Chief Nyesom Wike, has declared that his administration would remain focused on governance despite the ongoing intensified political campaigns.
Wike gave the assurance at the flag-off of civil works on 17 internal roads within Rumuigbo community in Obio/Akpor Local Government Area, performed by former Minister of Agriculture, Senator Heineken Lokpobiri, yesterday.
The governor remarked that his social contract with Rivers people, who gave him their mandate, demanded that he remained committed to serve them till the last day of his administration.
Wike assured that he would continue to make Rivers people happy and deliver quality infrastructure until May 29, 2023.
“We believe that political party is a vehicle that conveys you to where you want to go. Having conveyed you to where you are heading to, you come down and begin to do governance.
“We just invited you (Lokpobiri) to come down and see what we are doing in the state.
“So many people are distracted by campaign. We are not going to be distracted by campaign. We want to focus on the development of our community. I will work until May 29, 2023, because that is the day my agreement will terminate with the people of Rivers State.”
Dismissing comments by critics that Rumuigbo community has never benefitted from his administration, Wike reminded them of the reconstruction work carried out on the Omoi-Orosi road handled by Julius Berger Nigeria Plc with the effective drains channelled through Okocha Street to the nearby stream.
According to Wike, Julius Berger Nigeria Plc was also contracted to handle the Obi Wali Road, saying that perennial flooding was still experienced in the area.
To solve the perennial flood experienced around the Obi Wali Road axis, Wike pointed to a particular land that was considered to be suitable to channel the flash water, and assured that the Rivers State Government would acquire the land for that purpose.
“We have said severally, and many people have made one or two comments that: what has Rumuigbo benefited from this government?
“We have always told people, yes, our tenure will expire on May 29, 2023, but all the communities that are within our jurisdiction; we will do all we can to make sure we bring development to the area.
“But let it be on record, since I came, this community has produced two commissioners in Rivers State Independent Electoral Commission (RISIEC); Prof. Reginald Amadi, and Dr.IhuomaChuku.
“You have also produced Dr.Kinikanwo Green, who has been chairman of the Rivers State Primary Healthcare Board. So, in terms of appointment, it will be difficult for anybody to say you have not gotten anything.”
Wike also donated N200million for the rebuilding of the palace of the EzeApara in the area.
Performing the flag-off, former Minister of Agriculture, Senator Heineken Lokpobiri,explained that he had, within the last three days, accompanied Wike to flag-off strategic road projects in addition to the one he was flagging off.
These and many other projects, Lokpobiri noted,were what had marked Wike as the king of infrastructure delivery, which was an unprecedented approach to governance in Nigeria.
Such strides, Lokpobiri remarked, were evidence of the unlimited love Wike had for Rivers people, adding that he was also a direct beneficiary because he lives in Port Harcourt.
Lokpobiri thanked Wike for his singular contributions towards the promotion of the legal profession in Nigeria.
It is not only for building the best Law School Campus in Port Harcourt, he asserted, but also for improving the facilities at the South-South Law School Campus in Yenagoa.
In his remarks, Rivers State Commissioner for Works, Dr.DakorinimaAlaboGeorge-Kelly, provided the description of the project, and said there were a total of 17 streets that make up the Rumuigbo internal roads.
In all, he explained that the roads measure a total of 8.3kilometre-long, 6meters in width, had drains on both sides of the same size of 600millimeters by 600millimeters cross-sectionally, with 150millimeter-wall thickness and 150millimeter-base concrete.
George-Kelly said the project has been scheduled for completion within six months, adding that the contractor had been mobilised about four weeks ago.

Angry with the N100,000 weekly cash withdrawal limits set by the Central Bank of Nigeria (CBN), last Tuesday, and its attendant economic and social challenges, the House of Representatives at yesterday’s plenary asked the CBN Governor, Mr. Godwin Emefiele, to suspend implementation of the policy.
Emefiele was asked to cause an appearance, Thursday next week to explain to the House on the impact and significance of the new policy.
The suspension is to last pending the outcome of the expected engagement with the House on the compliance with the relevant sections of the CBN act and the 1999 Constitution on the monetary policies of the apex bank.
The resolution was sequel to a motion under matters of urgent public importance moved by Hon. Magaji Dau Aliyu.
Apart from the Minority Leader, Hon. Ndudi Elumelu, who supported the CBN policy in that it would curb banditry and reduce the incidence of corruption, many other lawmakers who spoke, vehemently condemned the decision of the CBN.
The opposition may eventually signpost a directive by the House by a way of resolution to drop the policy after the Wednesday meeting.
Midway into the proceedings, Hon. Mark Gbillah, raised a point of order, citing relevant sections of the CBN act and the 1999 Constitution, reminding the House that the CBN governor ought to be giving periodic briefings on monetary policies of the apex bank to the National Assembly.
He noted that the CBN was yet to explain to Nigerians how the redesigning of the Naira was funded, stressing that there was no approval of such expenditures by the National Assembly.
To that end, the Speaker, Hon Femi Gbajabiamila, who felt convinced after confirming from some members of the relevant committees of the House on the absence of Emefiele for the briefings, relied on the sections of the laws so quoted to sustain the point of order.
He eventually heeded to the prayer of the substantive motion and ruled that Emefiele be summoned to brief the House next week. 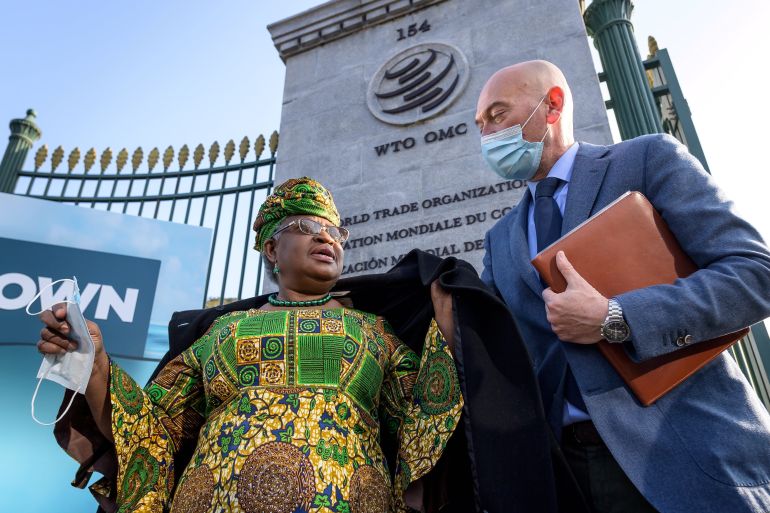 The United Kingdom-based African Leadership Magazine (ALM) has named the Director-General of the World Trade Organisation (WTO), Dr NgoziOkonjo-Iweala, as “African Female Leader of the Year”.
According to a statement by ALM, the category was part of the “11th African leadership persons of the year award – 2022”.
Also, the President of Sierra Leone, Dr Julius Maada Bio, won the African of the Year while his Zambian Counterpart, President HakaindeHichilema won the Political Leader of the Year.
The trio were declared the winners in the 11th African Leadership Magazine Persons of the Year – 2022.
The African leadership person of the year awards are decided with votes and billed annually for leading Africans contributing immensely to the development of the Dark Continent.
The annual award event is also a platform for honouring people-centred leadership and Africans pursuing a pan-African agenda in their chosen fields of endeavour.
According to the statement, Okonjo-Iweala polled over 60per cent of the over 15,000 votes in the category at the close of the poll on December 2, 2022.
The Chairman of the awards, Ken Giami said the nominees see advancement where others see regression, and bring out possibilities in the midst of challenges.
“They are on a mission and are eager to lead Africa to the Promised Land,” Giami said.
Winners for the 11th edition of the award shall be presented with the honour on February 16, 2023, at a ceremony scheduled to hold in Port Louis, Mauritius.