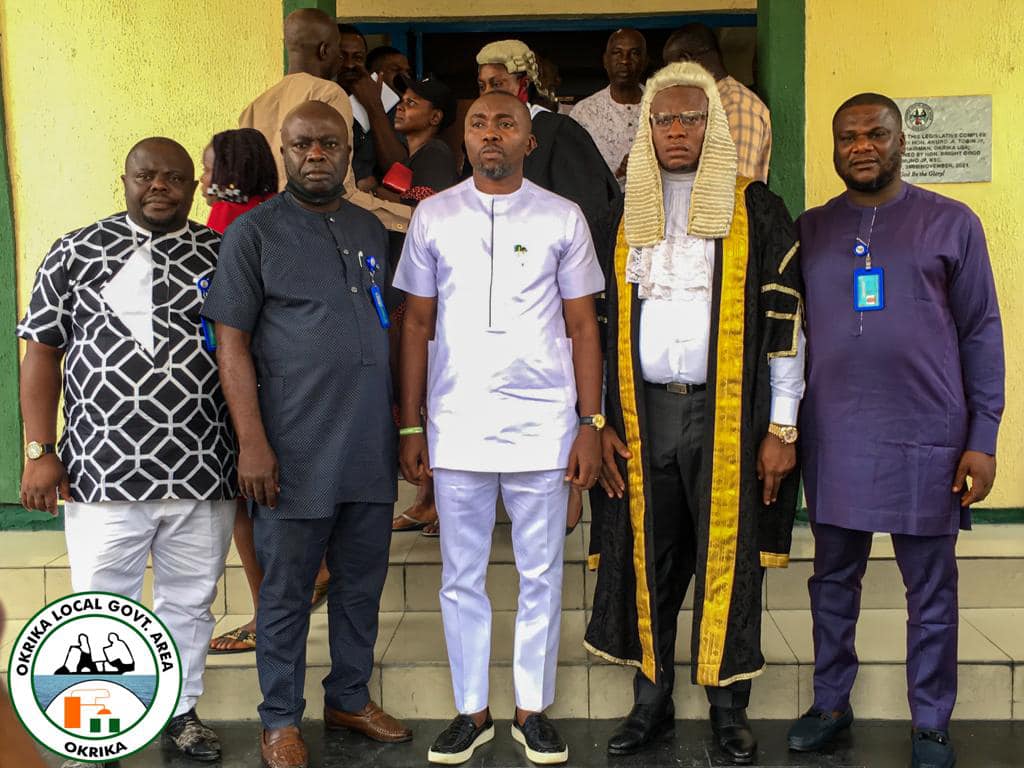 The Rivers Equity Group, last Wednesday, landed in Okrika Local Government Area in Rivers State with its message of free medical outreach in collaboration with the Linsolar Eye Clinic.
The Rivers Equity Group led by Hon. Elder Clapton Ogolo and assisted by Sir John Nalley, on arrival at Okrika Island were warmly received by the Council Chairman, Hon. Akuro Tobin, in the company of his Vice, Hon. Charity Igbulubo, and other council officials and political appointees.
Briefing the council chairman, the Deputy Leader of the group, Sir J.P. Nalley, said that the group’s mission to Okrika was to ensure that the people get free medical attention, adding that the programme was in series across the 23 local governments aimed at reaching out to the people to cater for their healthcare needs, especially their eyes and to enlighten them on the Electoral Act, the importance of the PVC, non-violent elections, and the need to live healthy and stay alive to enjoy the dividends of democratic governance.
He expressed expectation that, by the grace of God, the gubernatorial candidate of the PDP in the upcoming 2023 governorship electionin Rivers State, Sir Siminialayi Fubara, would deliver good governance to the people, if elected.
Furthermore, he said that the free medical outreach was a divinely inspired project fully endorsed by Fubara, who he said, agrees with and fully supports the project as it was an avenue to not just go and enlighten the people but to also accompany it with value in the form of free medical outreach to indigent people across the state.
He thanked the chairman with his team and the good people of Okrika for the warm and superlative welcome accorded the Rivers Equity Group.
In his response, e Okrika Council Chairman, Hon. Akuro Tobin, expressed joy that the project has reached his people, and thanked the Rivers Equity Group for coming to reach out to the people of Okrika through such a laudable programme.
He said that Okrika was a complete PDP territory, adding that so long as the group was backed by Fubara, Okrika was with PDP and would stand with Fubara and all PDP candidates in the forthcoming 2023 general election.
He said that with the good works of Governor Nyesom Wike all over the state and his complementary efforts in the area,Okrika people were at home with the PDP, and had no alternative but the PDP and PDP alone.
During a town hall meeting, Tobin, told his people that the group was backed by Sir Siminialayi Fubara, who was the governorship candidate of the PDP for the 2023 gubernatorial election in the state.
He explained that with SIM as the incoming governor of the state, better days were on the horizon.
He charged the people to ensure that all hands were on deck to secure convincing victory for Fubara and other PDP candidates for the sustenance and consolidation of the giant strides in every sector of the economy of the state under the NEW Rivers Vision of Chief Nyesom Wike.
The chairman also promised that the council would take care of the bill for the treatment of those whose cases need referral as he also requested the Rivers Equity Group to come back for a repeat free medical outreach in the area so as to extend the gesture to more people in the area.
Thereafter, Tobin declared open the free medical outreach programme as he personally handed over free eyeglasses and drugs to a select 20 beneficiaries, just as he inspected the medical facilities of the partners of the team, Linsolar Eye Clinic.
He also took advantage of the moment to get his eyes tested, and was given a suitable prescribed pair of eyeglasses.
Earlier, the CEO of Linsolar Eye Clinic, Dr. Adeline Aluge, gave a brief talk on the medical services expected and procedures.
She also admonished the people to always avoid practices that were capable of damaging their eyes and always seek proper medical help for sustained healthy eyes, even as she said that to vote right, the eyes were important to avoid wasting their votes.
Earlier, the group had proceeded along with the Okrikacouncil chairman on separate courtesy visits to the Amanyanabo of Okochiri Kingdom, King Ateke Michael Tom, and Amanyanabo of Kirike Kingdom, Air Commodore T.E.O. Ogube (rtd).
At the palaces of the two kings, the group was warmly welcomed, just as its leaders, Elder Clapton Ogolo and BarristerEmekaIchoku, briefed the monarchs on the mission of the Rivers Equity Group to Okrika.
The message was the same – reaching the unreached indigent citizens with care for their health – especially their eyes, as well as enlighten them on the Electoral Act and an admonition to shun electoral violence.
In their separate responses at their different palaces, the monarchs’ messages were the same.
They appreciated the group for the lofty project they had embarked on, especially as it was geared towards helping the poor masses.
They blessed the group for the successful execution of the project, and declared support of Okrika people for the candidature of Sir SiminialayiFubara.
They also admonished the group to carry on with the good works, especially to amplify the message of non-violence and peaceful coexistence.
The medical care included treatments, drugs administration, free eyeglasses,while more serious cases were referred for further medical attention.