Acting Vice Chancellor of Ignatius Ajuru University of Education (IAUE), Prof. Okechuku Onuchuku, says he will always go beyond providing administrative and academic leadership to supporting conferences that would impact positively on the university.
The IAUE boss, who made this disclosure recently, while declaring open the Third International Conference organized by the Faculty of Humanities of the institution, said this is in congnisance of the importance of conferences to the development of academics and society at large.
“Those in the academia cannot be strong scholars if they do not appear at conferences to let people know their positions or school of thoughts that they belong to.
“I will not only provide administrative and academic leadership, but also support impactful conferences as that from the Faculty of Humanities, for scholars to have sound intellectual discourse and come up with solutions that would solve societal problems, thereby contributing to national growth, development and improve the general wellbeing of people”, he stated.
Addressing the audience, Chairman of the occasion and Director, Research and Development of the institution, Professor Humphrey Kemka Ogbonda, commended the Faculty for the conference which he said is part of the academic culture of universities.
While assuring on the capabilities of the resource persons as being grounded in their fields, he enjoined participants to listen and assimilate to enable them improve themselves.
In his address, the Dean, Faculty of Humanities, Professor Kingdom Eke Orji, expressed appreciation to the Acting Vice Chancellor and his management team for moral and financial support towards the success of the conference.
Noting that the Faculty alone has witnessed three viable conferences from the Departments of English and Communication Art, French and International Studies, and Fine and Applied Arts, between August and November, he credited the successes to financial and moral support of Prof. Onuchuku.
“Prof. Okechuku Onuchuku has transformed the intellectual physiognomy of the university in addition to creating a robust platform for accelerated scholarly engagements”, he said.
According to him, the theme of the conference, “The Humanities and National Development in Contemporary Africa”, is relevant, particularly to Africa.
The theme, he said, “is significant and apt against the background that virtually all the 54 African countries with about 1.3 billion persons are grappling with socio-economic cum political challenges or more, bearing in mind that a Nigerian is one out of every four Africans”.
Prof. Orji further noted that the Faculty designed inclusive subthemes to “interrogate daunting challenges of inter state conflicts, terrorism, banditry, environmental degradation, the negative impact of climate change, economic downturn, substandard education, poor governance, unemployment, electoral violence, ethno-religious crisis, yawning gaps between policy formulation and implementation, diseases, rule of law breeches, endemic corruption, and high debt profile”.
Highlight of the event was the presentation of awards to the Acting VC “for excellent performance, educational innovations and promotion of ‘town and gown’ relations”. 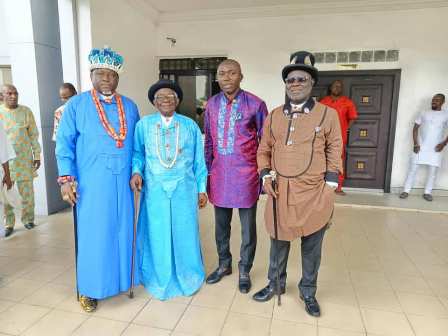