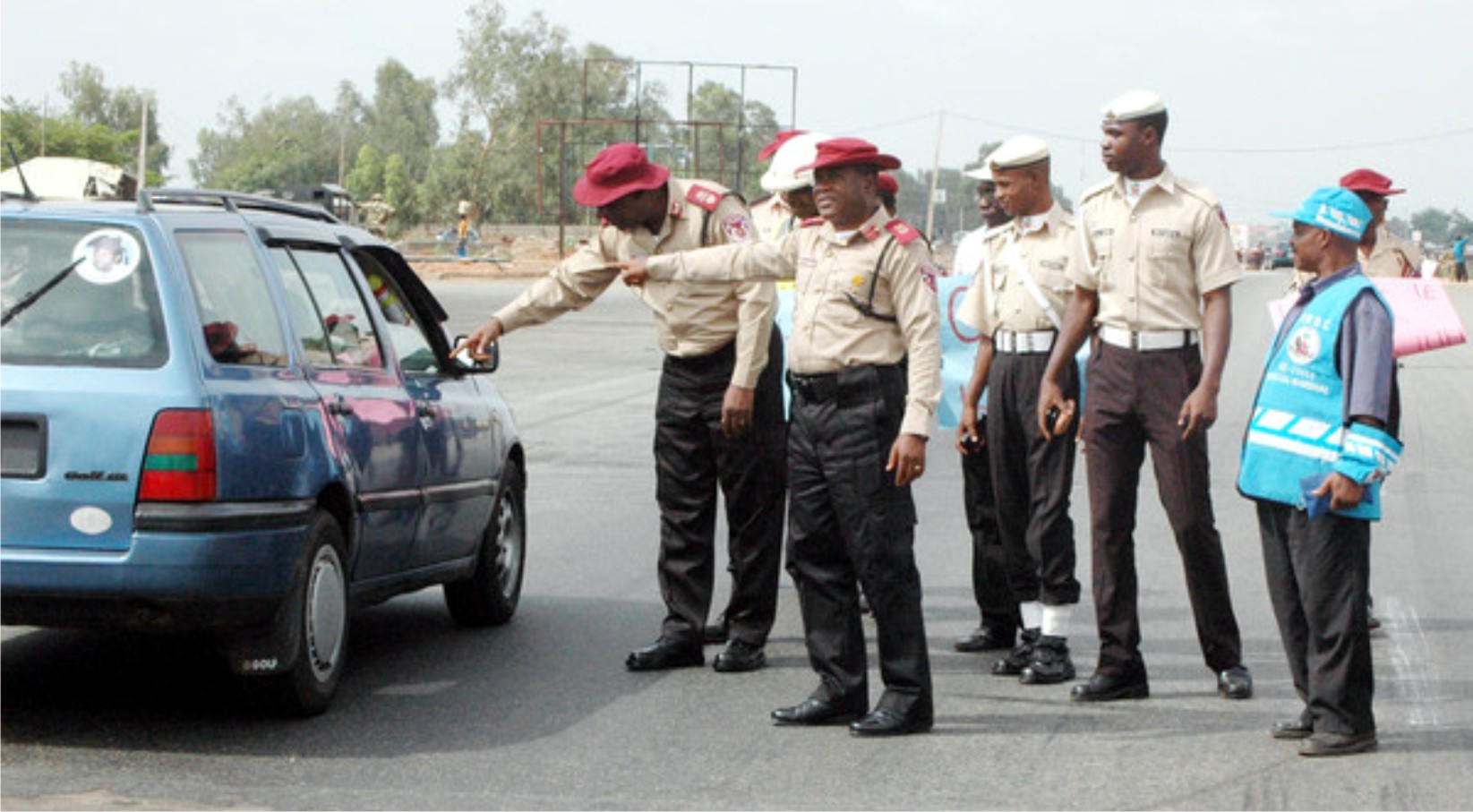 The Federal Road Safety Corps (FRSC), Edo State Sector Command, says it has deployed 1,265 officers and Special Marshalls across the state to ensure safer roads during the Ember months.
Edo State Sector Commander, Mr Henry Benemaisia, disclosed this, midweek, during an interview with The Tide source in Benin.
He said radar guns had also been allocated to the marshals to track and caution speeding drivers, especially along the Benin-Ore and Ekpoma-Auchi highway.
The source reports that radar gun is a handheld device used by traffic police to estimate the speed of a passing vehicle.
Benemaisia said the corps had identified 27 critical points for daily monitoring of traffic during the period.
“All our operatives including special marshals have been deployed to strategic locations across the state.
“Our traffic control units have been strengthened to address high vehicular movement in the ember months.
“Edo is a traffic hub and we have delineated the routes that our men will control traffic, they are about 27 critical points in the state.
“It is important that our men both officers and special marshals man those points to ease travels and reduce traffic gridlock in this period,’’ the Sector Commander said.
According to him, there is already massive visibility of the corps, with patrol vehicles on the roads daily to reduce road traffic crashes.
“We are also heightening public education in motor parks and places of worship,” Benemaisia added.
The Sector Commander, therefore, urged motorists to obey traffic rules and regulations, including ensuring that their vehicles are road worthy, avoiding overloading and speeding.
“We have activated our mobile court and we have been sitting on a weekly basis to prosecute recalcitrant drivers during this period,” he said.

The government of Edo State has distributed generators and defeathering machines to 100 poultry farmers across the three senatorial districts in the state.
The items were distributed under the Nigeria COVID-19 Action Recovery and Economic Stimulus Programme (N-CARES) code named EDO-CARES.
N-CARES is a World Bank assisted project designed to ameliorate the adverse effects of COVID-19 pandemic on the poor and vulnerable people
The State Project Coordinator, EDO-CARES, Mr Edward Izevbigie, said that the “project seeks to improve livelihood, increase food security as well as reviving Small and Medium Enterprises (SMEs) in the state”.
Izevbigie said the State Government was committed to boosting the state food basket through various agricultural programmes and interventions.
“This generators and other poultry equipment are not for sale. Put them to good use to boost the food basket of the state.
“The government has a very strong monitoring and evaluation unit, so we are going to monitor their usage,” he said.
Permanent Secretary, Ministry for Social Development and Humanitarian Affairs, Mrs Ifueko Alufohai, urged the farmers to ensure good use of the items.
Represented by Osahon Ojomon, a Director in the ministry, Alufohai noted that the Federal Government and the World Bank would also be monitoring the progress of the farmers.
Mr Rosemary Imafidon, a beneficiary on behalf of other beneficiaries thanked the state government and its partners for the kind gesture.

The Nigerian Midstream and Downstream Petroleum Regulatory Authority (NMDPRA) has assured Nigerians that the prevailing fuel crisis ravaging various parts of the country would soon disappear.
NMDPRA’s Coordinator in Delta State, Mr Victor Ohwodiasa, gave the assurance when he led a team of the regulatory authority on an unscheduled inspection of some petroleum depots at Ifiekporo in Delta, recently.
The Tide source reports that Ifiekporo Community is in Warri South Local Government area of Delta.
Ohwodiasa said a lot of vessels laden with Premium Motor Spirit (PMS), known as Petrol, were already coming into the state.
He said the regulatory authority would ensure that the vessels discharge products as quickly as possible.
“We will ensure that the depots receiving these products lift them out to the end users.
“By the time we have all the depots wet with PMS and they are lifting regularly, the looming scarcity we are experiencing will disappear,” Ohwodiasa said.
The agency’s coordinator said essence of the visit was to ensure that depots with the products dispensed to licenced retail outlets, eliminate middle men and also avoid diversion.
“Once we get our daily manifest, we send our men out to make sure that those trucks gets to their actual locations.
“There might be one or two infractions; we have apprehended about two persons for product diversion and they were made to face the full wrath of the law.
“As a regulatory authority, saddled with the responsibility of regulating the Midstream and Downstream of the Oil and Gas sector in Nigeria, we will continue to do what we need to do.
“This is to ensure that the products are available and adequately and fairly distributed within Delta and neighboring states,” he said.
Ohwodiasa said the NMDPRA would carry out intensed routine surveillance, adding that it would sustain the tempo to ensure that the right things were done in the Midstream and Downstream sector of the oil and gas industry.
He, however, urged people to stop panic buying, assuring that the Federal Government was doing everything possible to ensure availability of petroleum products in the country, particularly during the Yuletide season and beyond.
Ohwodiasa added that NMDPRA would ensure that the products get to the consumers at the right price, quality and quantity.
Among the depots visited were: Matrix Energy Group, Pinnacle Oil and Gas Ltd. and AYM Shafa Ltd.
Speaking on behalf of the Matrix Energy, Mr Francis Ibe, the Terminal Manager, Matrix Energy, said the PMS stock level at the Warri Depot was 14 million litres, as at Thursday.
Ibe said as at evening of Thursday, it had trucked out over four million litres.
“With what I am pushing out, I know it will not be enough. Before now on weekly basis, we were receiving 40 million litres of PMS, but at the moment, we barely received 40 million in two weeks. So you can see the difference.
“Fourty million litres in one week as against receiving one vessels in two weeks cannot solve the problem. There is a serious supply gap,” Ibe said.
Also, Mr Luke Nnajieze, the Depot Manager, Pinnacle Oil and Gas, Warri Depot, said that the current stock level of the company in Warri as at Thursday morning was 3.1 million litres of Premium Motor Spirit (PMS).
Nnajieze added that the Automated Gasoline Oil (AGO) was 2.9 million litres. At the moment, we are out of stock of Dual Purpose Kerosene (DPK).
“On daily basis, we trucked 2.5 million litres to 3 million litres of PMS,” he said.
Nnajieze identified heavy vehicular gridlock as a major challenge confronting their business in the area, calling on the government to assist in expanding or fixing the bad access road.
He also called for the dredging of the Escravos Bar to allow bigger vessels to navigate and bring in petroleum products.

Itsekiri Drags FG To Court Over Non-Inclusion In NDDC Board

Some prominent Itsekiri sons have dragged President Mohammadu Buhari, the National Assembly, AGF, and Lauretta Onochie to the Federal High Court Warri over the composition of the proposed new Board of the Niger Delta Development Commission (NDDC).
In a pre-action notice filed by Prince Emmanuel Okotie-Eboh, Comrade Amaechi Ogbonna, Prince Tsola Emiko Amoye, and Prince Isaac Dorsu as intending claimants, they are seeking the order of the Honorable Court to set aside the nomination of Lauretta Onochie the 8th proposed defendant by President Buhari, the proposed 1st defendant in the circumstances of the case and replace her with someone from any of the oil-bearing Itsekiri communities.
They further sought the order of the court to mandate President Buhari to invoke and apply the spirit and intent of the relevant statutes requiring the consideration of the quantum of contribution to be applied with regard to the nomination, screening, and approval to fill the slot of the chairman or managing director on the board of the NDDC.
They further sought the court to restrain Buhari or his proxies from inaugurating the Board with Onochie or any person who is not from an oil producing community as stipulated by the NDDC Act.
They also sought an order of injunction restraining Onochie or her proxies from presenting themselves as a representative to fill the Delta State slot on the governing board of the NDDC even as they prayed the court to mandate the Attorney General of the Federation to ensure compliance with the spirit and intent of the relevant statutes as well as the overriding objectives of national unity, equity, and harmonious co-existence and the principle of distributive justice, requiring that the consideration of quantum of production in the circumstances.
The pre-action notice was filed on their behalf by the Chambers of Jolone Ikomi, Esq, and Robinson Ariyo & Co.