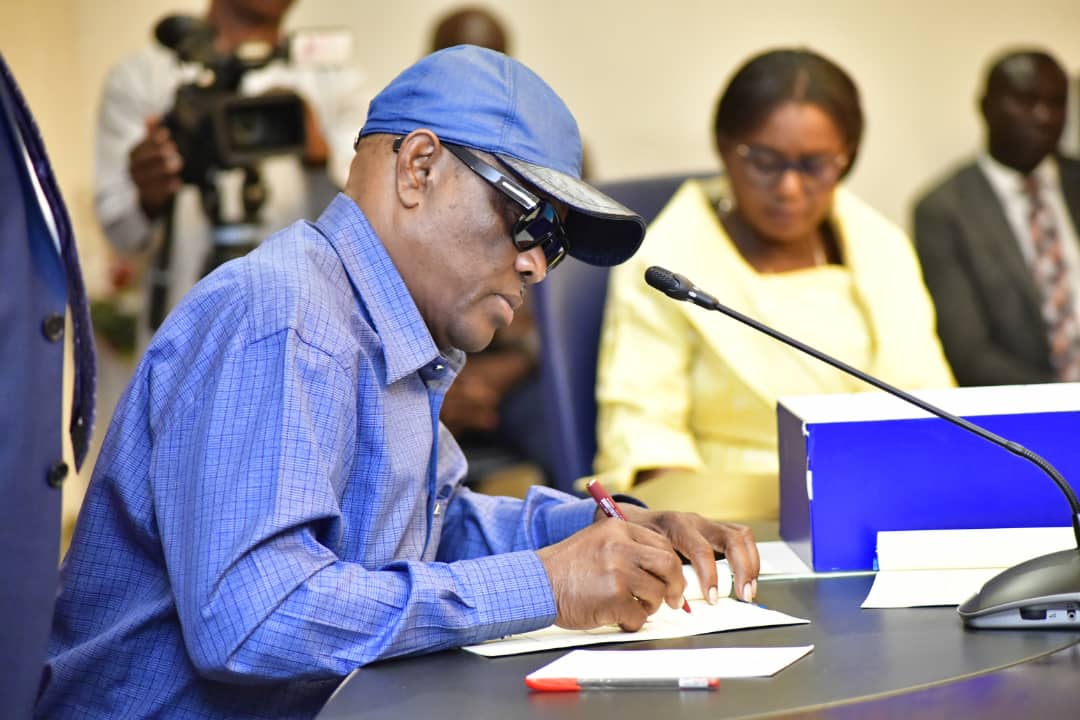 Rivers State Governor, Chief Nyesom Wike, has signed a legal instrument into law, as an executive action sequel to the resolution of the state House of Assembly.
With the signing, the recognition that accorded Sir Celestine Omehia the status of a former governor of the state, with accruable rights and benefits, are now cancelled.
Wike signed the instrument at the Executive Council Chambers of Government House, Port Harcourt, last Friday, when it was presented to him by the state Attorney General and Commissioner of Justice, Prof Zacchaeus Adangor.
The governor disclosed that he had always respected resolutions from the state House of Assembly and never had any reason to disagree with them.
“Yesterday, I received a resolution from the Assembly de-recognising Sir Celestine Omehia, who had enjoyed the privileges of a former governor of the state.
“But you will recollect that sometime in 2007/2008, my predecessor, Chibuike Amaechi, did not recognise Sir Celestine Omehia as a former governor of the state.
“When we came on board, there were issues and the Assembly felt that, having served as governor, he should enjoy the status of a former governor. I’ve always respected the resolutions of the Assembly. I’ve never one day disagreed with anything the Assembly has sent to me.”
Wike pointed to the reasons adduced by the leader of the Rivers State House of Assembly that the strength of the information they have now had compelled them to reverse what they did in 2015.
The governor noted that the hallmark of leadership was being able to acknowledge that there was error done in the course of administration and having the courage to correct such error.
“The leader of the House said they have better facts and what are the facts? The facts are the Supreme Court judgement categorically stated that Sir Celestine Omehia was never a governor, because he never stood for any election, and that it will be inappropriate for their (Assembly) legacy that they didn’t respect the judgement of the Supreme Court.
“In this part of our country, people will praise you when it suits them, but when you do the uncommon thing, people will not praise you.”
Wike stressed the need for people to keep politics away from what had been done.
He further urged people to get a copy of the Supreme Court judgement, and understand that it was the right thing to derecognise Omehia in the eye of the law.
“I had to call the Attorney General for him to give me his legal opinion as regards the resolution of the Assembly, and rightly, the Attorney General said they (Assembly) are right.
“That in the first instance, the recognition was extra-judicial, that the Assembly has no power to change the judgement of any court, not to talk of the Supreme Court. So, people should understand, and not begin to play politics with it.”
Wike explained as untrue insinuation in the media that Sir Celestine Omehia was derecognised because he had ceased to be his ally, and now a member of the presidential campaign council of the Peoples Democratic Party (PDP).
He stated the Assembly had woken to conscience and did not want posterity to blame them for an error they had done which they could correct.
Wike likened it to the position members of the National Assembly also found themselves when they were working on the Electoral Amendment Bill.
“Remember, last time, the National Assembly, when they were making the amendment of the Electoral Act, everybody said they should include the card reader, and that was in 2018/2019.
“The National Assembly did not do it, particularly, the All Progressives Congress (APC) members, and people told them what they were doing will hunt them. ‘Posterity will not forgive you if you do not allow democracy to thrive’.
“In the new Electoral Amendment Act, because they knew they did not do the right thing before, they had to include it, and you can see that members of the National Assembly are happy that they have done the right thing.”
Wike also pointed to the sum of money paid to Sir Celestine Omehia as a proof against those who peddled tales that government does not pay such benefits at all.
“If this did not happen, nobody will even know that the state government has been coughing out such amount of money to pay as benefits.
“I’m sure, they must have told you that no benefits and all entitlements were never paid, that is what you hear everywhere.
“But yesterday, when it was revealed that the state government coughed out such amount of money to pay as benefits as recommended by the Assembly, and now, they have sent the resolution to me, I thank God today, without looking back, I have signed it as instrument, and it will be gazetted for record purposes”, Wike said.

PDP Crisis: Ogbulafor Would’ve Resigned If He Was Ayu -Ohanaeze