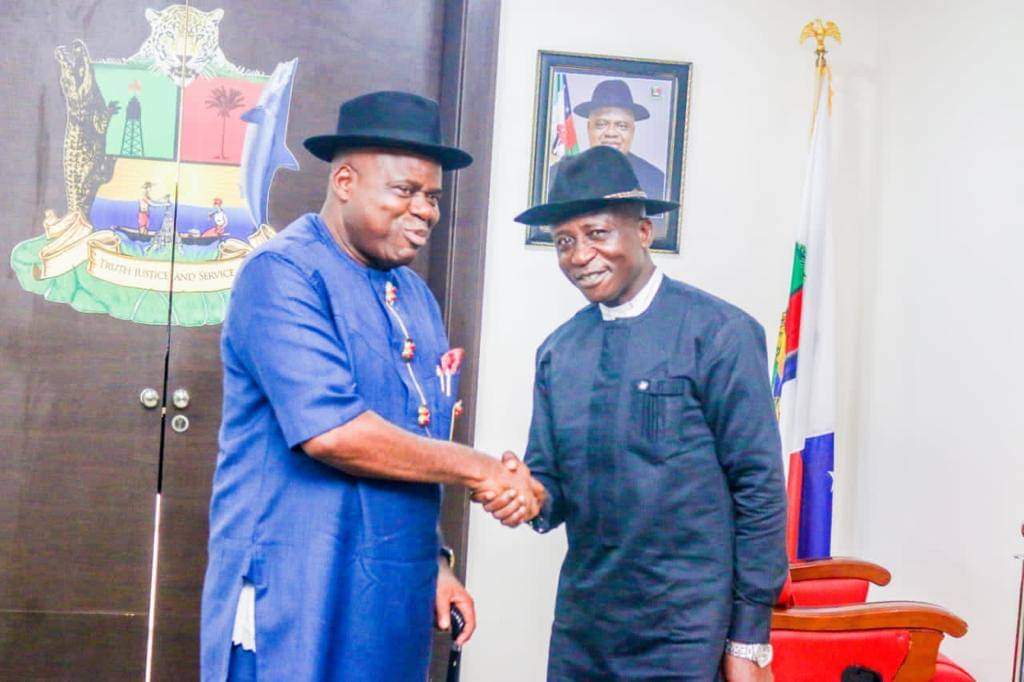 Bayelsa Deputy Governor, Senator Lawrence Ewhrudjakpo, has opened up on why he had always declined from throwing flamboyant celebrations on his birthday, citing the pathetic situation of Nigeria as reason.
He said it would be an emotional burden on him to celebrate in a country where millions of its people are being thrown into grinding poverty, misery and grief on a daily basis.
Senator Ewhrudjakpo stated this when student union leaders from the National Association of Nigerian Students (NANS), the National Union of Bayelsa State Students (NUBSS) worldwide, the National Union of Izon-Ebe Students (NUIS), and the Forward Bayelsa West Initiative (FBWI) jointly presented birthday souvenirs to him in Government House, Yenagoa.
He explained that he had deliberately avoided any form of fanfare on his birthday because of his conviction that “Nigeria as it is today is in a state of mourning.”
Describing Nigeria as a country on the brink of total failure and collapse, Senator Ewhrudjakpo, pointed out that critical sectors of the economy such as health, education and the financial system had collapsed, with the naira in a free fall, thereby sharply reducing the purchasing power of the average Nigerian.
“Actually I feel that there is nothing to celebrate about. As far as I am concerned, Nigeria is not in a state where people should make any serious celebration in whatever guise.I believe that Nigeria today is in a state of mourning, and in a state of failure, because there is nothing in Nigeria that points to celebration.
“It is only a happy man that celebrates. I have this conviction that it is an irresponsible father that will be celebrating when his children are in hunger and his family is not united”, he said.
He bemoaned that morality had been thrown to the winds, stressing that most law enforcement agents were deeply involved in armed robbery, kidnapping, oil bunkering, rape and Internet fraud.
While urging the students to shun antisocial behaviors, the Deputy Governor, however, thanked them for appreciating the little he had contributed to the development of the state.
Speaking earlier on behalf of the student unions, Mr. Joey Ekadi, explained that the visit was to express their love for Senator Ewhrudjakpo, describing him as a sincere, hardworking, competent and humble leader.
Mr Ekadi, who is the President of the Forward Bayelsa West Initiative, seized the opportunity to inform the Deputy Governor of their upcoming programmes and called for support.
In a related development, Senator Lawrence Ewhrudjakpo, has commended the Ministry of Women, Children Affairs, Empowerment and Social Development, and the Management of the Gloryland Children’s Home, Opolo, for building right moral and social values in the children at the facility.
He gave the commendation at the Gloryland Children’s Home while being hosted by the children to a low-key ceremony to mark his 57th birthday.
Senator Ewhrudjakpo, who was full of praises for the children for being so thoughtful to have given him the honour, encouraged them to be studious as future leaders, and pledged to support them always.
In her brief welcome address, the Commissioner for the Ministry of Women/Children Affairs, Empowerment and Social Development, Mrs Faith Opene, thanked the state government for taking care of the GloryLand Children’s Home.
Mrs Opene, who particularly appreciated the Deputy Governor for treating the children as his own kids, informed that for the first time, children at the facility have been enrolled in school, and were being conveyed to and from school with an 18-seater bus everyday.