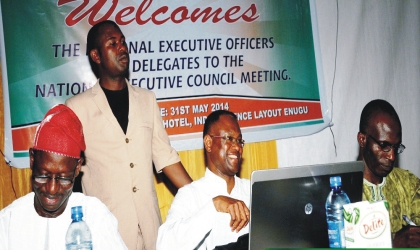 Nigerian scientists and experts have called on the government  to create an enabling environment for biotechnology to thrive in order to build, boost and sustain a national economy.
The experts made the call recently at a Biosafety and Biotechnology Sensitisation Workshop for North Central farmers and Agricultural Extension Agents in Abuja.
The Director General (DG) of National Biotechnology Development Agency (NABDA), Prof Abdullahi Mustapha, in his presentation, said a quarter of the world population expected to rise by 9.5 per cent in 2050 would be in Africa.
According to him, to aid in the building and boosting of a Nigeria’s national economy, the biotechnology and biosafety space must be encouraged to thrive.
Noting that present food production does not match the current population growth rate, Mustapha said Nigeria and Africa each year lose exponential amount in foreign exchange due to incessant food imports from developed countries.
“Transformation of agriculture in Africa requires a new approach focusing on Science, Technology and Innovations to increase productivity and generate surplus for trade and export”, he said.
The DG urged that Nigeria and Africa must wake up to the reality confronting the continent regarding food insufficiency and supply by investing in the biotechnology and biosafety space.
He stated that the challenges of  low food production, poor harvest, degraded soils, limited access to finance, dysfunctional markets, unconducive policies, climate change, among others, could be overcome.
Mustapha also said some of these challenges were self-inflicted and could be surmounted with zeal in the application of modern biotechnology and safe application of biosafety measures.

Rivers State Deputy Governor, Dr Ipalibo Harry Banigo, has hailed a National Youth Service Corps (NYSC) member in the state, Olamidayo Elizabeth Oladapo, for renovating and equipping a library hall at Community Secondary School (CSS),Nkpolu-Oroworukwo in Port Harcourt City Local Government Area.
The deputy governor, who described the corps member as a shining star, urged other serving corps members to emulate Miss Oladayo’s laudable gesture in the state.
Banigo stated this in Port Harcourt during the commissioning of a library hall renovated and equipped with textbooks, chairs and tables by a serving corps member, Miss Olamidayo Elizabeth Oladayo at Community Secondary School, Nkpolu-Oroworukwo.
Represented by the Head of Department, Education and Counselling, Ministry of Youths and Development, Pastor Samuel Miebaka, Banigo said the state government under the watch of Governor Nyesom Wike, was determined to provide enabling environment for youths in the state to excel.
The governor, Banigo said, had put all mechanism in place to ensure security of lives and property, especially to all serving corps members in the 23 local government areas of the state.
She also assured all serving corps members of the prompt payment of their monthly stipends as at when due.
Speaking at the commissioning, the State Coordinator, National Youths Service Corps (NYSC), George Mfongang, called on the management of the school to make judicious use of the library to improve quality of learning.
Represented by Ikpugi Isaac, Mfongang appealed to the teachers and students of the school not to allow the dreams of Miss Oladayo to die by not preserving the culture of reading in the school.
Commending Miss Oladayo on the project, Principal, CSS, Nkpolu-Oroworukwo, Mrs Beatrice Epelle, said the corps member has laid a footprint in the school and in the state by establishing a library for students.
She said the school did not have a functional library before the corps member embarked on the renovation and equipping the new library for the school.
The principal urged other corps members in the state to emulate the good gesture of Miss Oladayo by impacting positively on the lives of their host communities in particular and the state in general during their service years.
“It is not only by serving the state and communities you are posted, but by impacting positively on the lives of the people.
“The library”, she said “would boost the educational image of this school and encourage reading culture and learning”.
Speaking to The Tide shortly after the commissioning, Miss Olamidayo Elizabeth Oladayo, said she was motivated to embark on the project due to the plight of the students in the school.
“I met a school without a library, so, I was moved toestablish this project here.Here is not my Primary Assignment (PA) in the state.
“The Lord led a vision in my heart to embark on the project to assist the students”.
She said it was strange to see such a school without a functional library and the students were sitting on bare floor to read and write.
Oladayo, who serves at the Military Hospital, Port Harcourt as a health attendant, graduated from University of Ilorin, and studied Anatomy.
On the library project at CSS,Nkpolu-Oroworukwo, Oladayo said she renovated and equipped the library hall with modern textbooks; installed celling fans; painted the hall; and constructed tables and chairs at the tune of over N400,000.00 only.
Accompanied by her parents, Mr & Mrs Oladayo, the 24-year old graduate said she hailed from Ogun State.
MissOladayo called on the students of CSS, Nkpolu-Oroworukwo to make judicious use of the library to enhance the learning and reading culture in their lives.
“This library will enable you to cultivate good reading culture in your lives; improve your knowledge as good students”.

The Nigerian Institution of Water Engineers (NIWE) has called for the application of data and technologies for effective integrated water resources management to maximise economic and social benefits for the country.
President of NIWE, Mrs Chinyere Igwegbe, made the call in her welcome address at the 5th NIWE International Water Conference  in Abuja, recently.
The conference, with the theme, “Application of Data and Technology for Effective Integrated Water Resource Management”, was organised by NIWE with support from the Federal Ministry of Water Resources, NiMet, NIHSA, UNESCO and other stakeholders.
Igwegbe said the Institution would continue to actualise the mission and vision of the Nigerian Society of Engineers (NSE) by providing high ethical standards, service delivery, and professional development of members in the water and sanitation sector.
According to her, the global scenario indicated that water demand outweighed the supply, especially in the sub-Saharan region.
She said the importance of data gathering and application was directly connected with success and cannot be overemphasised.
“Information technology is technical artifacts that facilitate stakeholders’ communications in supporting decision making in a complex societal connection like ours.
“This is more so for the water sector where limited water resources are threatened by climate change and growing competition for resources among sectors, regions, and countries.
“We found data and information system in water resources as public information for design, construction, and operation of different projects with regards to their environmental impact that would be ascertained.
“This three-day conference provides an opportunity to renew contacts and discuss problems of mutual interests among conglomerates of professionals.
“In the spirit of true cooperation and collaborations, we in the water division of NSE are proud to be involved in changing the narratives in the water sector, joining in an action-oriented effort in solving problems relating to water development,” Igwegbe said.

The Minister of Communications and Digital Economy, Isa Pantami has appealed to security agencies to make use of databases by National Identity Management Commission (NIMC) to address security challenges.
Pantami said this at the 4th National Identity Day celebration in Abuja with the theme’ Traditional Institutions as Critical Stakeholders for Citizens Mobilisation”.
He said both the Subscribers Identification Module (SIM) and the NIN were available to solve the security challenges currently faced in the country.
“We are pleading with security institutions to make use of the database.It is not our work to do the security work, our own is to support them with these two databases available, NIN and SIM. From information at my disposal, the CEOs of these institutions, the utilisation has been highly insignificant”, he said.
He also said the challenges of education, health, security and many more would be addressed with complete databases in the country in partnership with National Population Commission (NPC).
“Proper databases will guide us as a country to know the age bracket of the population under and below 60 years, male, female, those living in the rural and urban areas. From the databases we can plan easily, data base is the foundation of getting our education, medical system, food security and security right in the country”,  he said.
He also  pointed out that traditional rulers and other institutions in the country have critical roles to play in mediating, stimulating, mobilising and rallying our people, in the rural, semi-urban and even urban areas, to embrace enrolment to obtain their NIN.
Pantami, however encouragedthe citizenry to embrace enrolment to ensure that the remaining population that were yet to be enrolled is fully covered, adding that it can be achieved in the next 24 months.
The Director-General of NIMC, Aliyu Aziz, said the Commission would be partnering with the traditional rulers and traditional institutions all over the nation to raise awareness on the need for NIN registration and usage.
“We want to use this opportunity and platform to appeal for the active participation of the traditional institutions in drumming up support for government programmes and in this case, the National Identification project. Identification is a tool for empowerment and greater use of digital ID can help bring the much-needed governance and coordination in development and service delivery. NIMC had made great strides on so many fronts in the last three years.From just over 1,000 enrolment centres and 2,000 enrolment devices across the country,” he said.
Aziz said NIMC in partnership with its licensed enrolment partners had more than 15,000 enrolment centres and more than 29,000 enrolment devices deployed nationwide.