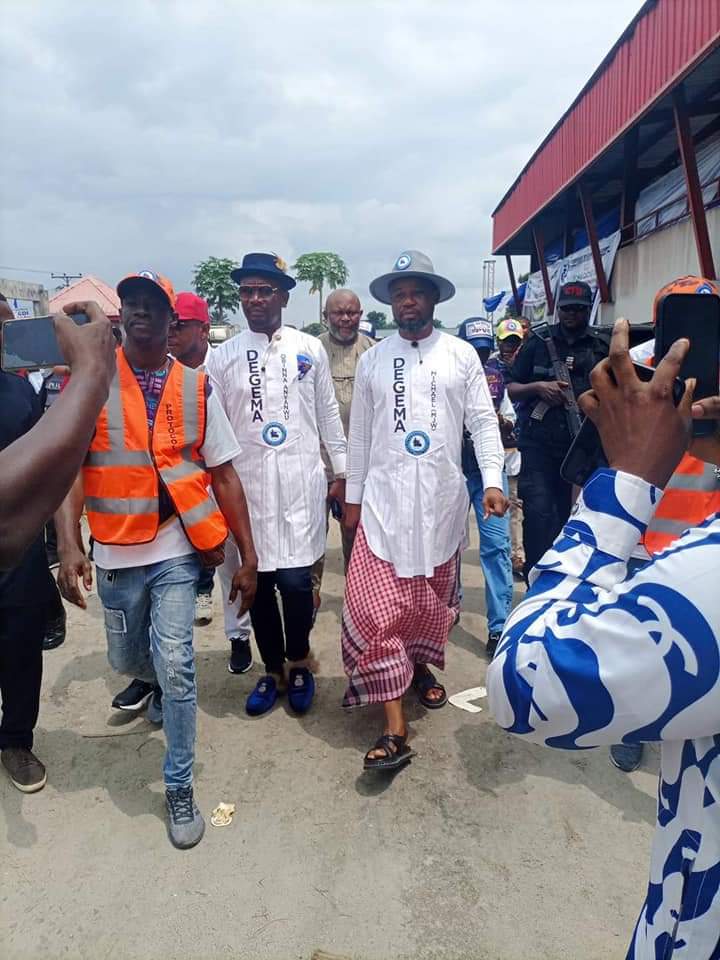 The Chairman of Degema Local Government Council of Rivers State, Hon. Michael John Williams, has lauded the Rivers State Governor, Chief Nyesom Wike, for the construction and commissioning of the ultra-modern Community Secondary School, Obuama, in the local government area.
Speaking at the commissioning ceremony of the edifice with state-of-the-art facilities, last Friday, the council chairman noted that the people of Degema and indeed Kalabari were very grateful to the governor for all that his administration had done for them, both in infrastructure and human capacity development.
He stated that since the inception of the Wike administration, the governor had taken deliberate steps to better the living condition of the Kalabari people, adding that the people had never had it this good from previous administrations.
The council boss who went on to list some projects executed by the governor, including the ongoing Trans-Kalabari Road, assured the governor of the continued support of the Kalabari people.
In his speech, Governor Wike, who thanked his deputy, Dr (Mrs) Ipalibo Harry-Banigo, for bringing the deplorable state of the secondary school to his attention, directed the Ministry of Special Projects to immediately design two hostel accommodations for the male and female students within two weeks.
He stated that his administration had been busy through the week, showcasing its landmark efforts in the education sector in answer to criticisms that he was only constructing roads.
The Governor who disclosed his readiness to shift attention to the health sector, expressed satisfaction that his administration had touched all sectors in the state, explaining that his huge investment in road construction was due to the fact that roads attract development.
On his part, the Special Guest of Honour and former Governor of Ekiti State, Ayodele Fayose, commended Governor Wike for his good work in the State, adding that posterity would be kind to him.
He eulogized Governor Wike as a man with a good heart and will to accomplish, love and support others.
Mr. Fayose, while advising the presidential candidate of the Peoples Democratic Party (PDP), Alhaji Atiku Abubakar to be wary of the people around, stated that most of them do not mean well for the party, describing them as “enemies of the throne.”
“A lot of people surrounding the throne are enemies of the throne.
“A lot of people surrounding the throne have one axe to grind with somebody and they take it to where they are not supposed to take it.
“There is no living being in this party and outside this party that would not acknowledge your (Gov. Wike) contribution to this party. You are the soul of this party,” Fayose stated.
While warning that no one rises up by pulling down their leaders, Mr. Fayose noted with regret that the very people that Governor Wike helped to build were the same people that were doing everything to pull him down, assuring, however, that his good work would not go unrewarded.
He expressed shock that the people who stood firm by the PDP when even sitting governors were decamping, were today being made enemies by people who do not like the truth, arguing that there was still time for the party to unite, in order to boost its chances of clinching victory.
The former governor, who expressed confidence that the party would unite because it needs unity to be able to win the elections, however, called on Atiku Abubakar to do the needful by honouring his words.
He appealed to the people around the PDP presidential candidate to allow the party to win the election because no one celebrates victory until it is won, praying God to give Atiku Abubakar the grace to lead the party.