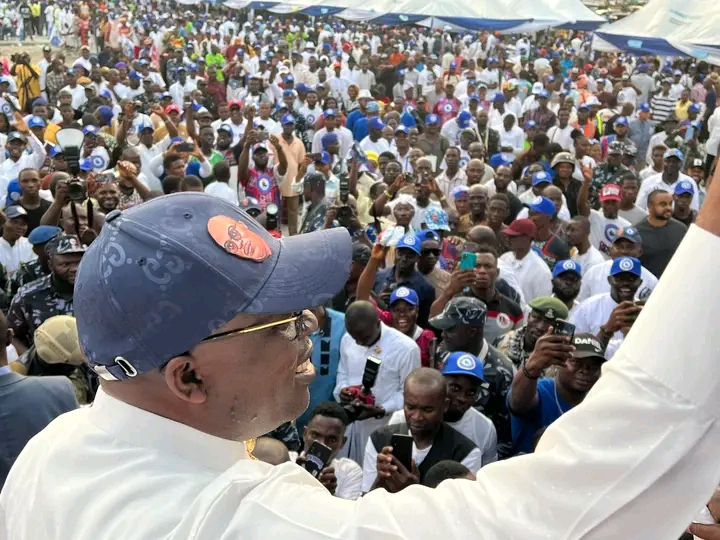 The Rivers State Chairman of the Inter-Party Advisory Council (IPAC), Ambassador Desmond Akawor, has commended the Grassroots Development Initiative (GDI) for its efforts at sensitising the people of Rivers State on the importance of collecting their Permanent Voter’s Cards(PVCs).
Ambassador Akawor made the commendation last Friday when the GDI took its sensitisation rally to the two Kalabari speaking local government areas of Akuku Toru and Asari Toru.
The event, which held at Abonnema, and Buguma, headquarters of Akuku Toru and Asari Toru  Local Government Areas, witnessed a total shutdown  of both cities.
Reacting to the mammoth crowds that converged on the Abonnema Girls School and Kalabari National College (KNC) fields, the State IPAC Chairman described it as the biblical “sand on the seashore”.
Ambassador Akawor, who is also the Rivers State Chairman of the Peoples Democratic Party (PDP), expressed  happiness with  the people  of Asari Toru and Akuku Toru for their impressive turn out and lauded them for proving that GDI was solidly on ground in the two local government areas.
He said, as IPAC Chairman in Rivers State, he felt obligated to thank GDI members  for the way they had sensitised the  people to collect their PVCs.
“As IPAC Chairman in Rivers State, my job is to send a message from all the 17 political parties in Rivers State  to thank the President- General for the work he is doing, sensitising our people, making them to collect their PVCs”, he said.
In his own remarks, the Governorship candidate of PDP in the forthcoming 2023 general elections in the State, Amaopusenibo Siminialayi Fubara, said, with the support displayed by the Kalabari people, he  could comfortably go home and sleep, believing that the people had been properly mobilised and sensitised on PVC collection.
He thanked the people of Asari Toru and Akuku Toru  for  coming out in their large numbers and GDI for the massive grassroots mobilisation.
Addressing the crowd at Abonnema, former Secretary to the Rivers State Government,  Dr. Tammy Danagogo, urged GDI faithful in the area to take the PVC collection awareness message to every community,  including villages and fishing ports..
He said it was only with their voter cards that the people  could rescue the country from bad governance which had made life very difficult  for Nigerians, a position that was also re-emphasised by other stakeholders and leaders in the two local government areas during their solidarity speeches.
Both rallies, which were attended by the creme of Kalabari politicians and other stakeholders, featured jubilant processions by GDI members in the 13 wards of Asari Toru and 17 wards in Akuku Toru Local Government Areas, respectively.