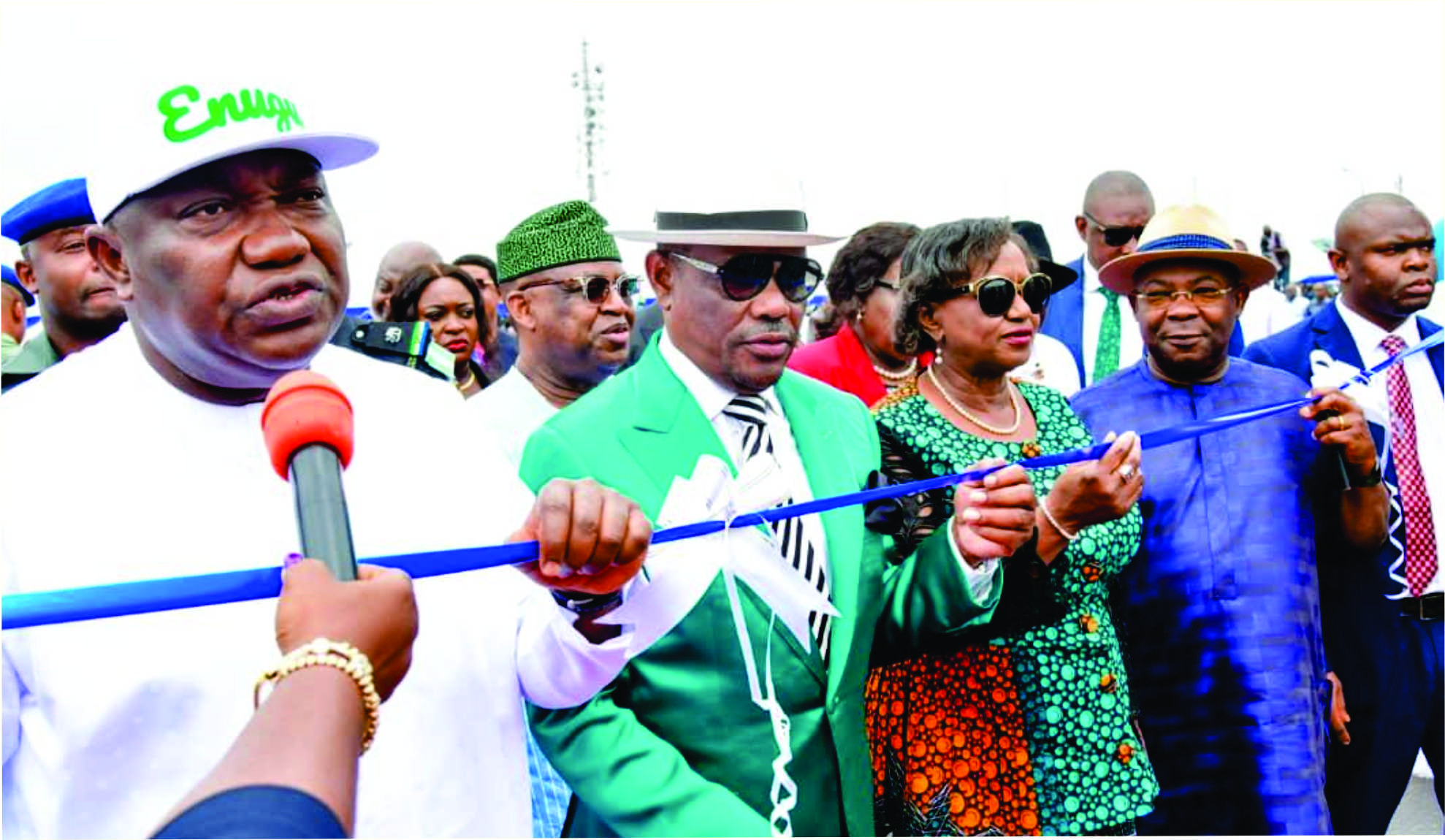 Rivers State Governor, Chief Nyesom Wike, has offered candid political advice to former Governor of Kaduna State, Senator Ahmed Makarfi, to make sure that the Peoples Democratic Party (PDP) wins all elections in his state.
The Rivers State governor said it was better for Makarfi, who was the former national acting chairman of the PDP, to focus on the forthcoming 2023 general election and how he would ensure victory for the PDP in Kaduna State, instead of joining to say uncanny things about him.
Wike gave the advice, yesterday, at the inauguration of the sand-fill area and estate layout in Ogbum-Nu-Abali, Port Harcourt, which was performed by Enugu State Governor, Hon Ífeanyi Ugwuanyi.
“This morning, I was watching Channels TV, I saw former national acting chairman of the PDP, Ahmed Makarfi, and he said he is very close to me. I don’t know how close he is to me.
“Somebody who is close to me, I don’t know when last we spoke. I have never spoken to him for the past five months. So, if you’re close to somebody politically, there is no way, in five months, you wouldn’t have spoken to the person.Is it not?
“He said, Wike, you’re sabotaging other people. I don’t know who says the other people have not. What I want to advise Makarfi is: look, you have a job, make sure PDP wins in Kaduna State. That is your job, leave Wike alone.
“Take it upon yourself that Kaduna falls to PDP. I don’t want to hear excuses that they rigged election or they didn’t rig election. That is what I’ve told everybody. In Kano, make sure PDP wins. In Niger, make PDP wins. In Jigawa, make sure PDP wins. If you win, then, see whether PDP wins here or not. It’s ‘Operation Deliver Your State’. Don’t use anybody’s state to add up.”
Wike also urged some Rivers politicians who delight in joining the company of politicians of other states to receive their defectors into PDP to return home and work to increase the numerical strength of the party in Rivers State.
According to him, the best way to show capacity to deliver votes for the party would be to deliver votes from the polling units, wards and the state.
“It’s not to go to Abuja and begin to gossip, say all kinds of things, come home and mobilise, let us see the capacity you have. It’s ‘operation deliver your poling units, operation deliver your ward, and operation deliver your local government. That is what politics is all about.”
Speaking about the project, Wike said his administration has created a new city within the state capital out of a swampy mangrove that once was a hideout for criminals and kidnappers.
Wike recalled that even if the people of Ogbum-Nu-Abali fought against the project and one of them dragged the government to court, but they are now happy with how the place has been transformed.
“We have created a new city where people will live, provided them with water, electricity, sewage, everything. This place can take at least, not less than 160 families if allocated.”
Performing the inauguration of the project, Enugu State Governor, HonÍfeanyiUgwuanyi, expressed delight to be invited for the third time to inaugurate project provided by Wike for Rivers people.
The Enugu State governor described Wike as an intense leader who leads from the front, famed for his legendary knack for project execution, and unrelenting crusade for the fundamental liberties as well as the economic interest of the people of Rivers State.
“Wike’s administration has done well and is worthy of our commendation. I, therefore, avail myself this opportunity to salute a standard-bearer in project delivery; a passionate promoter of the tenets of our constitutional democracy and federalism; an unrepentant advocate of the rule of law, equity and fair play; a formidable politician; a man imbued with the requisite gravitas for statecraft; and most importantly, my brother and friend.”
Ugwuanyi noted Wike’s strides in such austere time, which underscores the transformative capabilities of a responsive, responsible and accountable subnational government.
He pointed out that Wike has transformed the landscape of Port Harcourt City and the verdict of history would be kind to him.
Providing the description of the project, Rivers State Commissioner for Special Projects, DeinmaIyalla, said the entire reclaimed land measures 15.4 hectares, filled with about 432 cubic of sand and has five exit gates provided.
“This terrain was generally a swampy place with tough Marie clay and mangrove woods. The land entails land reclamation, shore protection, construction of road network with street lights, drains, power stations, after reticulation facilities.
“The land was allowed to settle for two years after the dredging before construction work commenced. A total of 2,300 meters(2.3km) of internal roads was constructed with cover slaps on drains and street lights.
“The estate is also provided with central electricity with power stations located strategically. A central water reticulation facility, with two water tanks of 360,000 litres each. One of the tanks is for drinking water while the other tank is for domestics use.”
In his address, the South-South Regional Manager of Julius Berger Nigeria Plc, Juergen Fischer, commended the Rivers State Government for granting the company the opportunity to part of its urban renewal programme.