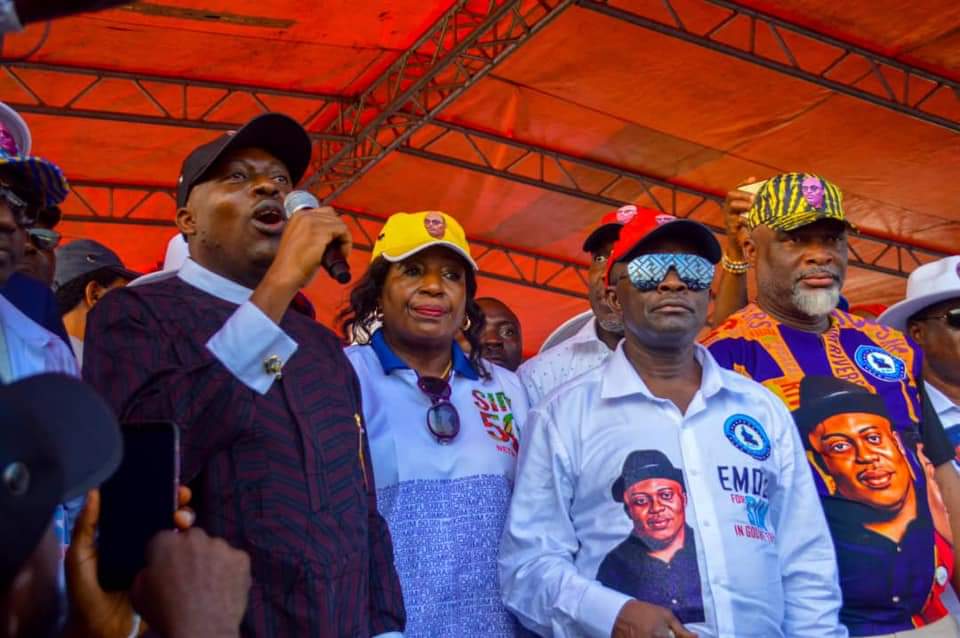 The Grassroot Development Initiative (GDI) has consolidated on its sensitisation of eligible voters in Rivers State with a rally in Ogba/Egbema/Ndoni Local Government Area, as thousands of members of the organisation and supporters of the Peoples Democratic Party (PDP) defied the heavy downpour, last Monday, to listen to the message tagged, “Operation Show Your PVC”.
The rally was in continuation of the non-governmental organisation’s push to encourage Rivers people to actively participate in the electoral process by obtaining their permanent voters’ cards in the ongoing Continuous Voter Registration exercise.
Addressing the mammoth crowd at the ceremony at the Omoku Mini Stadium, the state Chairman of the Peoples Democratic Party (PDP), Amb Desmond Akawor, commended GDI for coming up with the exercise, saying that it was aimed at increasing the people’s participation in the electoral process.
Represented by the Secretary of the party, Dr Benibo George, the chairman equally hailed the people of Ogba/Egbema/Ndoni for their large turnout despite the rains.
Also speaking, the PDP Gubernatorial Candidate for the 2023 election, Sir Siminialayi Fubara, thanked GDI for initiating the sensitisation programme, and said that it was an initiative worth investing in.
Represented by the Deputy Governorship candidate, Prof Ngozi Ordu, Fubara told the people to protect their PVCs from being stolen, explaining that once PVC is stolen, the individualno longer has the power to exercise his or her franchise.
He said the days of writing results or snatching ballot boxes were over, explaining that results of votes cast by the electorate would be transmitted electronically in 2023.
During their separate solidarity speeches, key ONELGA stakeholders stressed the need for eligible voters who were yet to register or collect their voters’ cards to do so.
They, however, maintained that residents of the area were already politically conscious and aware of the need to have their PVCs ahead of next year’s general election.
Meanwhile, the Bro. Felix Obuah Support Group has commended the Grassroot Democratic Initiative (GDI) led by Bright Amewhule for it’s successful PVC campaign in Omoku Town, Ogba/ Egbema/Ndoni Local Government Area of Rivers State.
The event, which had in attendance the PDP Deputy Governorship candidate, Prof. Ngozi Ordu, also had in attendance the Chairman of the LGA, Vincent Job, as well as serving members of the state assembly as well as former commissioners from the local government.
A statement by the group, said, “The BFO Support Group in keeping with the vision of its principal, Bro. Felix Amaechi Obuah, commends the large turnout for the exercise which will ensure the participation of citizens in the forthcoming general elections. It is for this reason that the decision of the Grassroot Democratic Initiative GDI to embark on this PVC registration drive us highly commendable.
“We also commend the incoming deputy Governorship candidate, Prof. Ngozi Ordu as well as the indefatigable Chairman of the local government, Sir. Vincent Job, for showing commitment towards ensuring that there is no room for failure in the local government’s bid to massively back Sim Fubara for governor next year”.
BFO Support Group, whose presence was visible at the event, stressed its unflinching support for the administration of Governor Nyesom Wike.