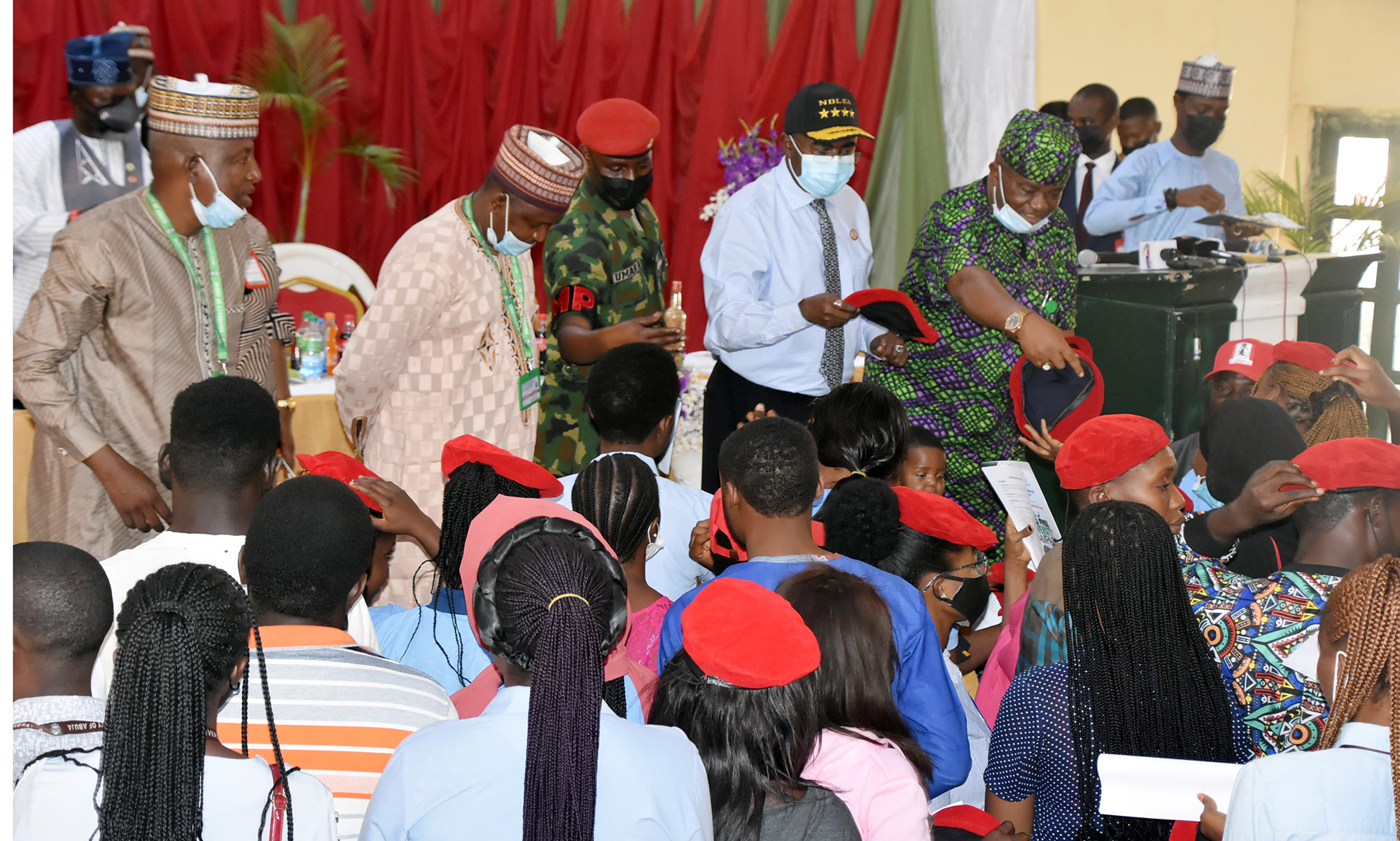 The National Drug Law Enforcement Agency (NDLEA) has arrested a 27 year old woman, Mrs. Opoola Mujidat, for concealing drugs in a bag and passing it on for distribution in Oman, Middle East.
A release by the Director, Media & Advocacy, Nigeria Drug Law Enforcement Agency (NDLEA) Headquarters, Femi Babafemi, in Lagos, stated that the drugs were “concealed in fetish bowls, containing scary native black soap and sponge in bags carried by two Oman-bound male passengers at the departure hall of the Murtala Muhammed International Airport (MMIA), Ikeja, Lagos”.
The release stated that the passengers, Raji Babatunde Kazeem and Akinbobola Omoniyi, were scheduled to “travel together to Oman on Ethiopian Airlines flight on Monday,11th July when they were intercepted by NDLEA operatives at the airport.
“A search of their luggage revealed wraps of cannabis sativa hidden in bowls of native black soap and sponge packed into a bag containing food items, which Kazeem was carrying.
“Both Kazeem and Omoniyi immediately alerted the anti-narcotic officers that Mujidat, who was still within the vicinity, gave them the bag containing the illicit substance at the airport”.
According to the statement, Mujidat was promptly arrested, and, on interrogation, accepted responsibility, saying that she brought the luggage for the two passengers to give to her husband in Oman.
Mujidat, who hails from Oyo East Local Governmwnt Area in Oyo State, confessed to packaging the bag containing the food items, including the black soap used to conceal the illicit substance.
Meanwhile, in Nasarawa State, NDLEA operatives intercepted over 91 jumbo bags of cannabis, weighing 1,029.5kg concealed in a truck and mounted on a natural gas tank by Doma road, around 500 Housing Estate, Lafia.
A 52-year-old suspect, Ernest Ojieh, was arrested in connection with the seizure on Saturday, 9th July.
“This was barely four days after operatives at Agwan Doka, Lafia, seized 38 big bags of the same substance with a total weight of 367kg. Two suspects: Abdullahi Iliyasu, 30, and Bashir Mohammed, 29 were arrested over the seizure”, according to the statement.
The statement continued that in Kaduna and Adamawa States, over half a million pills of pharmaceutical opioids were seized and suspects arrested in raid operations across the two states.
In Kaduna, 294,400 pills of Tramadol and Diazepam were seized from Shaban Nasir, Aminu Usman and Shamsudeen Hussaini, along Abuja-Kaduna Express Road, while Sa’idu Yahaya and Umar Abubakar were apprehended during a follow up operation in Kano, all on Friday 15th July.

In the same vein, over 227,000 different grades of Tramadol tablets were seized during the raid of a patent medicine store at Sabon Layi, close to Mubi main market, Mubi North LGA, Adamawa State on Sunday 3rd July.

Another suspect, Idris Adamu, 25, was also arrested in a shoe shop in the same Sabon Layi where over 5,000 tablets of Tramadol 225mg were recovered from him.

While commending the officers and men of the MMIA, Nasarawa, Kaduna and Adamawa Commands for the arrests, seizures and their dexterity, Chairman/Chief Executive Officer of NDLEA, Brig. Gen. Mohamed Buba Marwa (Rtd) warned the drug cartels that no matter the ingenuity of their modes of concealment, the dedicated workforce of the Agency will always expose them and their tricks.

Nigeria, Others May Continue In High Debts – Report