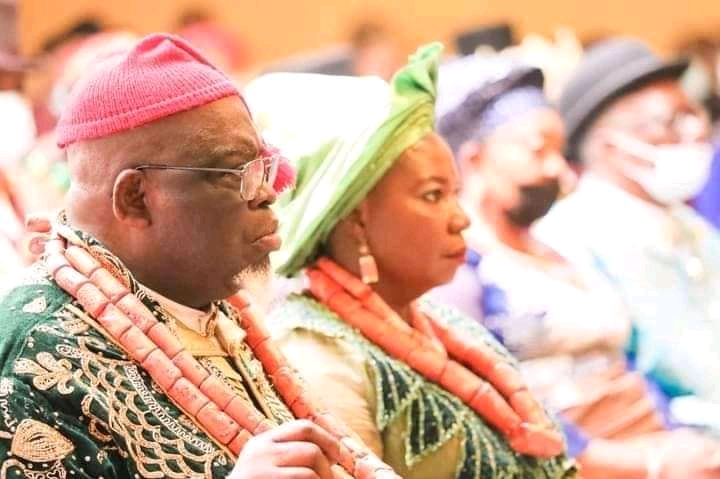 Incensed by recent outburst of some Christian leaders over political developments in the country, the Paramount Ruler and Nne-Nwe Eli Emohua XIII, Eze Sergeant Awuse, last Tuesday, in Port Harcourt, advised pastors to stop meddling into politics and confine themselves to evangelism to win more souls for Christ.
Awuse, who spoke when he received the management of Rivers State Newspaper Corporation, publishers of The Tide newspaper led by the General Manager, Chief Ernest Chinwo, wondered why pastors would dabble into politics and the nation’s electoral system in particular, peddling false prophesies about political leaders, ostensibly for pecuniary reasons.
Quoting copiously from the Bible, the Olo IV recalled that Jesus Christ, in his days, never preached prosperity but salvation of mankind before He died at 33.
“Christianity and politics are two different things, don’t combine them. Light and darkness are not friends, light has come to show you the way. Christ is the light of the world.
“There are many of them who prophesy that this person will win or this person will fail.At last, all is fallacy. If God did not give you that gift, stop talking, shut up, and face your members, if you have a way to exploit them.
“Stop deceiving your followers with fake prophecies. These fake pastors, especially the Pentecostal ones, have caused more tension in the country than politicians. They instigate their members against certain politicians they don’t like, predicting things they don’t have any inkling about.
“Our Christian religion has not done us any good by wading into the murky political terrain in this country.That is why darkness is now closing the light. How can a blind man lead a blind flock?”Awuse asked.
He blasted some self-acclaimed prophets, who have repeatedly made false prophecies about Rivers State Governor, Chief Nyesom Wike’s political life, warning them to steer clear of anything concerning the governor, as they could not predict his future.
The monarch, who was a governorship aspirant in the 1990s and a governorship candidate in 2003 in the state, said that only God, who created Wike and gave him life, could determine his future, and what he would become tomorrow.
He reminded the numerous fake prophets that Jesus Christ, and indeed, God’s prophecies never failed, as all prophecies in the Bible have either come to pass or would definitely manifest in human history.
The traditional ruler also took a swipe at critics of the culture and tradition of the people, saying that most of them who despised the traditional entity, misconstrued libation to ancestral fathers as fetish.
Awuse stated that in Israel, they still pay homage to their ancestral fathers like Abraham, Isaac and Jacob.
He said that Jesus Christ, in His time, did not dabble into politics or the tradition of the Roman Empire, as he repeatedly told his followers to give to Caesar what was Caesar’s, and to God whatwas God’s.
The monarch described the traditional institution as an important arm of the society that works in synergy with the government for the harmony, peace and sustainable development of the communities.
Awuse noted that with his recognition as the Nne-Nwe Eli XIII of Emohua Kingdomand Olo IV, the governor has restored justice, equity, peace and development to Emohua Kingdom as a man who believes in justice, equity and fair play.
The paramount ruler stated that since his installation and presentation of staff of office, peace and even development have known no bounds in Emohua Kingdom, and assured of the total support and cooperation of the people at the grassroots in all the communities in the kingdom to the policies and programmes of the state government.
He said that in Emohua Kingdom, which affairs he oversees as the paramount ruler, there were four distinct traditional organs operating together to ensure effective representation of the people and uphold equity and justice.
The structures include Ohna Emohua-in-Council (the supreme traditional body of Emuoha clan), the Eleru-Urie (Compound Chiefs), Emuoha Council of Chiefs, and the youth councils, explaining that these bodies have jointly contributed to the peaceful co-existence and development in Emohua.
“This has not happened before. In the past, whoever was the head of the community ruled as he wanted. But I rule as the people want, whatever they want, I do. That is why there is peace and even development in Emohua. Every strata and layer in Emohua Kingdom is being carried along, and every one can bear testimony to that. My style of leadership is inclusive and participatory.
“Emuoha is a religious community handed over to God, and we abide by His rules,”Awuse explained.