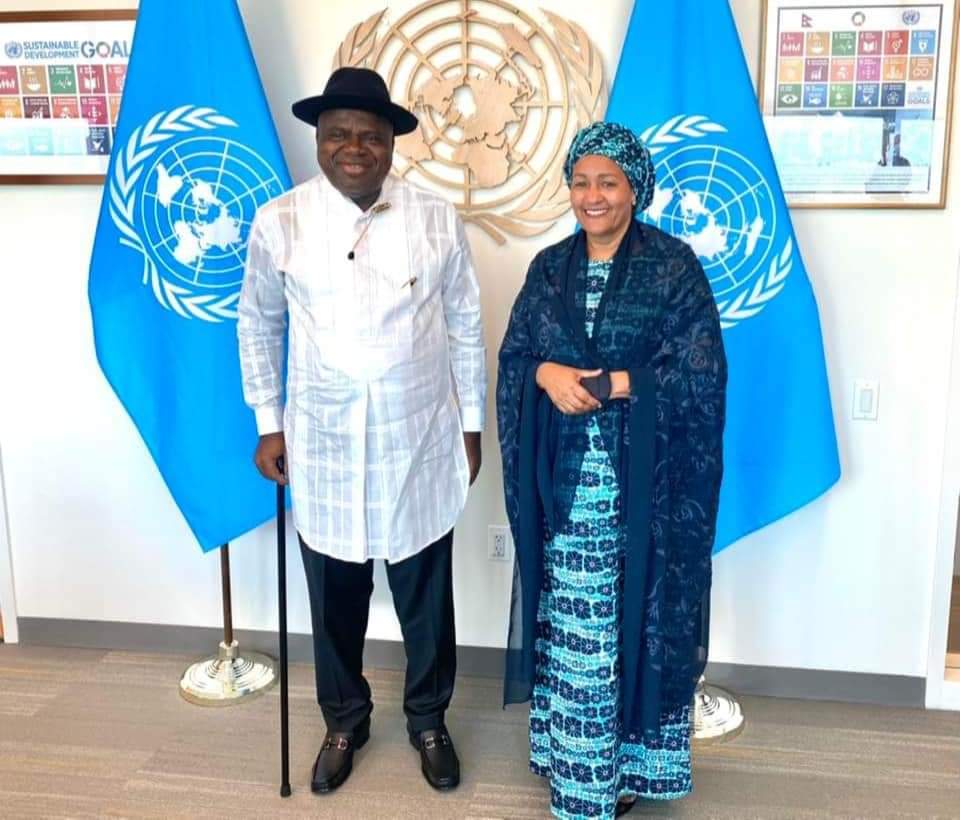 Bayelsa State Governor, Senator Douye Diri, has called for a deepened existing relationship between the United Nations (UN) and the State as a means of achieving the Sustainable Development Goals (SDGs) of the United Nations in the State.
Diri, who made the call during his recent meeting with the Deputy Secretary-General of the United Nations, Dr. Amina Mohammed, in her office at the United Nations Headquarters in New York, assured on the State’s readiness to do the needful towards achieving the GH also of the SDGs in the State.
A statement issued by the Governor’s media team noted that Governor Diri assured Mrs Mohammed that the Bayelsa State Government remained committed to the attainment of the SDGs outlined by the UN to enhance the living conditions of the people of the State.
According to he statement, “the government will continue to collaborate with the global body to fasttrack development in education, health, youth, women empowerment, food production, and the environment”.
He used the opportunity to congratulated Dr. Mohammed, a Nigerian, for rising to the enviable position, and for what he called her ‘great works’ at the UN.
On environmental pollution and degradation in the Niger Delta region of the country, Governor Diri, said the ongoing clean-up in Ogoni land by United Nations Environment Programme (UNEP) should be extended to the entire oil-rich Niger Delta, noting that Bayelsa State is worst affected by incidences of oil spills.
Recall that as part of his visit to Ijaws in the United States, Diri also paid a courtesy visit to the UN, where he met Dr. Mohammed.
Among the entourage of the Governor to the UN Headquarters were the Nigerian Consul-General in New York, Ambassador Lot Egopija; Member representing Sagbama/Ekeremor Federal Constituency in the National Assembly, Hon. Fred Agbedi; Permanent Secretary, Bayelsa State Ministry of Trade, Industry and Investments, Barr. Patience Ranami Abah; and Major Lancelot Anyanya (rtd).

Over 300 Get Medical Intervention At LAPO Health Outreach