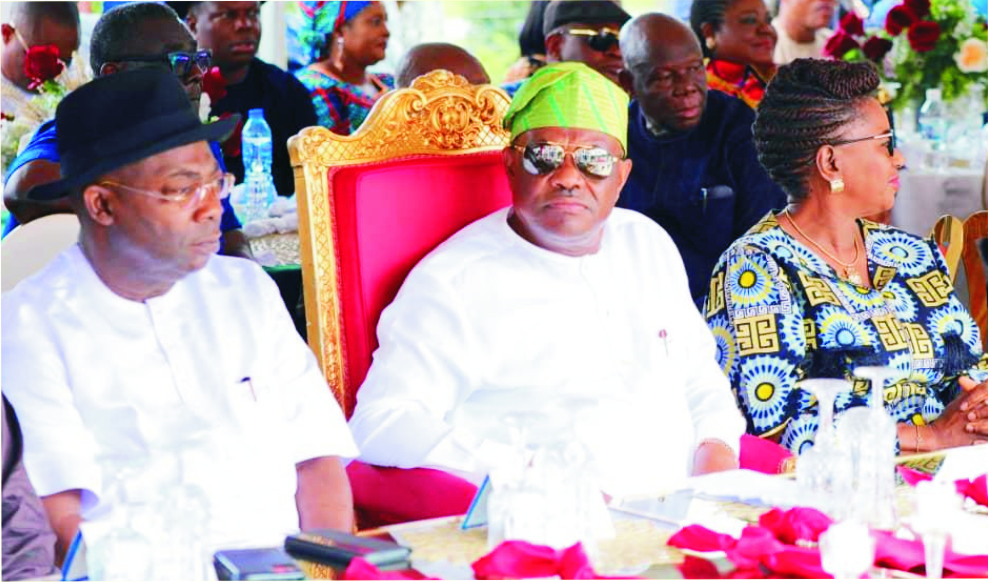 As part of efforts to reciprocate the good gesture and recognise the impact of the present administration led by Governor Nyesom Wike on massive infrastructure development projects across Khana Local Government Area of Rivers State,the authorities of the council have named the newly constructed Baen Community Modern Primary School’s eight classroom blocks after the state governor.
The school is now to be called ‘Nyesom Wike Modern Primary School, Bean’.
The project was among the six cardinal projects commissioned over the weekend to mark the one year in office of Khana Local Government Chairman, Dr Bariere Thomas’ administration in the area.
Speaking while commissioning the newly built ‘Nyesom Wike Modern Primary School, Baen’, the state Chairman of the Peoples Democratic Party (PDP), Amb Desmond Akawor, commended Bariere for the choice of the school project,saying that the council chairman has replicated what the governor has done in the education sector in the state.
Akawor said that for any society to turn around the fortunes of the people, it must start with the development of the education sector, adding that Ogoni people were noted for their exploits in education.
According to him,the chairman has, through the school project, invested hugely on human capital development,adding that great men and women would be churned out from the school.
“Great men and women will pass out of this school. You are replicating what Governor Nyesom Wike is doing at the education sector in this state.We commend your vision and choice to build the school project”, he stated.
The PDP chairman said that the performance of the Khana council boss has justified the essence for which the party gave the youth more opportunity as council chairmen.
He said that many youths were distinguished in their various professions, and urged the youths to give peace a chance in the area.
Also speaking, the Chairman of Khana Local Government Area, Dr Bariere Thomas, disclosed that the school was named after the state Governor, Chief Nyesom Wike, to reciprocate his good gestures to the people of the area,adding that the present administration under Wike has done more projects in the area than other past administrations in the state.
Bariere disclosed that the Khana Legislative Assembly had passed a resolution to name the school after Governor Nyesom Wike, adding that the school was built to end the suffering beingencountered by children from the community in search of primary education as well as fulfill his electioneering campaign promise to the people.
According to him,there was no other achievement for his administration better than to give the children access to free education,adding that the school has been equippedwith ICT laboratory and teachers’ quarters.
He used the opportunity to call on the state Ministry of Education, through the Universal Basic Education Board (RSUBEB),to immediately take over the school and ensure teachers were posted.
In their various speeches, the member representing Khana/GokanaFederal Constituency in the House of Representatives, Hon Dumnamene Dekor, and KAGOTE President, Hon Emmanuel Deeyaa, lauded Bariere for completing the project on schedule.
Other projects commissioned include Information and Communication Technology (ICT) centre,Industrial Training Unit, resurfaced Kaani Road, Khana Local Government Council Entrance Gate, all in Bori, as well as foundation stone laying of Bori market.

First US Military OEM Sets Up Facility In Nigeria