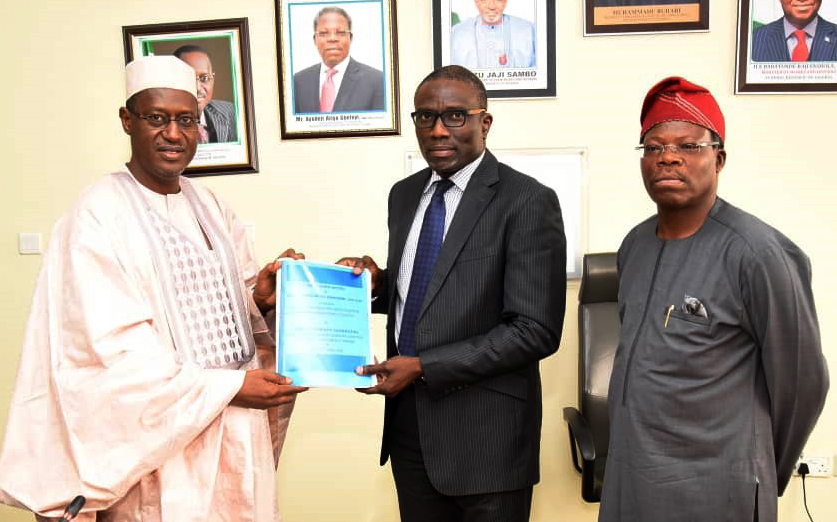 Thursday, April 7, 2022, the Chairman of Revenue Mobilisation, Allocation and Fiscal Commission
(RMAFC), Elias Mbam, presented the report of the proposed new revenue allocation formula for Nigeria to President Muhammadu Buhari. This is coming 30 years after the last exercise was carried out in 1992, during the military regime of Ibrahim Babangida.
Highlighting the key recommendations in the report, Mbam said the proposed vertical revenue distribution formula suggested 45.17 per cent for the Federal Government, 29.79 per cent for state governments and 21.04 per cent for local governments. Under the current sharing arrangement, the Federal Government receives 52.68 per cent of the revenue share, the states get 26.72 per cent and the local governments 20.60 per cent.
Under the special fund, the commission’s report recommended 1.0 per cent for ecology, 0.5 per cent for stabilisation, 1.3 per cent for natural resource development and 1.2 per cent for the Federal Capital Territory (FCT). According to him, the new sharing formula was reached after extensive consultations with key stakeholders, public hearings across the country, administering of questionnaires, and a study of several other countries with similar fiscal structures to draw useful lessons from.
The commission also visited the 36 states, the FCT, and all the local government areas including the six area councils in Abuja to sensitise and obtain inputs from stakeholders, according to the RMAFC chairman. The chairman added that literature reviews were conducted on the revenue allocation formula in Nigeria dating back to the pre-independence duration.
Memos were reportedly received from the public sector, individuals and private institutions across the country. Mbam further noted that the country’s political structure had altered since the last review in 1992, with the addition of six more states in 1996, bringing the number of states to 36. At the same time, the number of local government councils also increased from 589 to 774.
The revenue allocation formula is the fraction of resources accruing to the federation that goes to each component of the nation. It also specifies the resources conserved in the areas where they are produced, as well as the proportions of the revenue accruing to the collecting agencies of government. The lack of justice and fairness in the distribution of the resources often results in tension and controversies in the polity.
President Buhari’s reaction to the new income distribution formula is commendable. In particular, he said he would await the outcome of the constitutional review process before submitting the report to the National Assembly. He assured the commission’s members that the Federal Government would conduct an internal review and approval process for the report shortly.
Buhari said, ‘‘Considering the changing dynamics of our political-economy, such as privatisation, deregulation, funding arrangement of primary education, primary health care and the growing clamour for decentralisation, among others, we must take another look at our revenue sharing formula, especially the vertical aspects that relate to the tiers of government.”
If the new revenue-sharing procedure gets approval, the Federal Government will have its allocation reduced by 3.33 per cent. However, the most important issue with Nigeria is not how revenue is shared, but the revenue itself. Nigeria’s revenue to Gross Domestic Product (GDP) is about 8 perc ent while the average for Africa is 18 perc ent. Hence, it is more productive to concentrate efforts on improving revenue generation across the board than the fixation on sharing. We have a huge revenue problem.
The National Assembly should step up efforts to amend the relevant section of the Constitution for quick implementation of the new revenue formula. The Federal Government must immediately subject the report to its review and approval processes. We hail RMAFC for the meticulous work in carrying out its constitutional tasks. Nigerians, particularly state and local governments, are applauded for contributing to this development through the extensive stakeholder engagement processes.
At the height of the negotiating process of the current minimum wage of N30,000, the states (under the aegis of the Nigeria Governors’ Forum), proposed a fresh formulation to give them more resources. Governors cited their inability to pay. However, most of the governors have been reckless with the allocations they have been receiving, resulting in several states owing workers’ salaries and pension arrears. While state and local governments deserve to get more, the derivation on natural resources should also be jacked up with legally binding provisions on regular upward adjustments.
Nevertheless, the new sharing format is not the universal remedy for Nigeria’s stunted economic outlook. For now, Nigeria is a poor country. The World Bank estimates its Gross Domestic Product at $375.8 billion, the largest in Africa, but it is a deceptive narrative. At 200 million, its population far outstrips that of any other country on the continent. Our nation has been described by the World Poverty Clock as the global poverty capital, where 93 million people live below the $1.90 per day threshold.
The continuous sharing of oil resources currently generated will not be of significant help. The three tiers of government will permanently be bogged down in a financial crisis, primarily because Nigeria’s current structure is a dangerous aberration. For the nation to be progressive and dynamic, equity and justice have to be promoted in our federal system. Also, the retrogressive culture of entitlement to oil revenue should end. Ideally, the states should strive to become centres of development.
Across Nigeria today, the consensus is that there is an urgent need to devolve more financial resources from the centre to the states and local governments. This is to ensure that the tiers of government can carry out their functions and improve economic growth and development. While we endorse that agitation, we strongly believe that Nigeria could only attain its dream of development by operating true fiscal federalism, where every tier of government generates its revenue and controls the bulk of it, just as it was in the First Republic.

No To Gas Pipelines To Europe