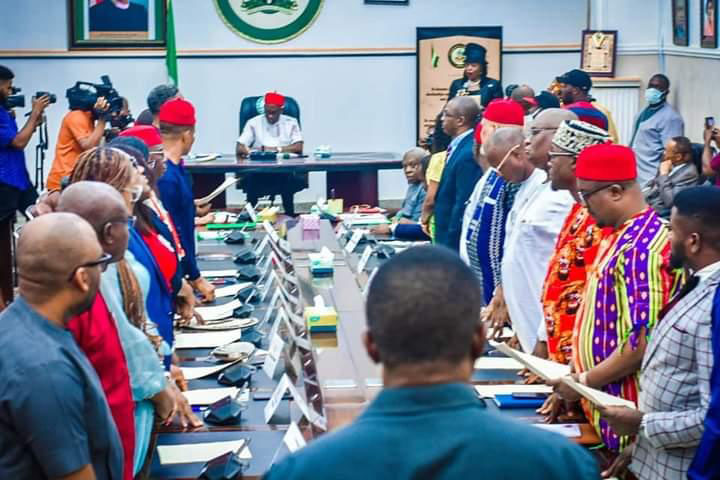 The Peoples Democratic Party (PDP) Southern Governors have insisted that the party should zone its 2023 presidential ticket to the southern part of Nigeria for equity and fairness.
The southern governors of the opposition party expressed their position on the issue of zoning while briefing newsmen after their meeting last Friday night at Akwa-Ibom Governor’s Lodge, Asokoro, Abuja.
The Governor of Abia State, Dr Okezie Ikpeazu, speaking on behalf of the governors, said they had watched with keen interest developments in PDP regarding zoning, but they had no reason to change their earlier stand.
“Our position is that first, we are committed to the unity of our party and we have worked hard to make sure that this party remains a strong and viable vehicle to ‘rescue’ Nigeria come 2023.
“Be that as it may, we want to draw your attention to the fact that we have agreed as Southern Governors in Lagos and also in Delta that this party has to respect the zoning principle as enshrined in our Constitution.
“And to that effect, we feel that the best thing to do is zone the presidency to the South, and we stand on that position.
“We have not seen any reason to change our position, because the Party was founded on the basis of equity and justice.
“We also think that equity and justice are important pillars that will ultimately stabilise our politics towards our journey in rescuing Nigeria,” Ikpeazu said.
Asked if the governors would reconsider their position if making the party’s ticket open would allow PDP win in 2023, Ikpeazu said “you haven’t told me why zoning will not give us victory.”
Also fielding questions on speculations that the PDP Zoning Committee has already made the ticket open, Ikpeazu said that the southern governors do not work on speculations.
On arguments that the ticket was made open because of the number of aspirants that had purchased forms or the need to retain ticket in the North, Ikpeazu said that the party must be firm in its decision and do whatever is seen to be true and fair.
“Let me tell you something, if you want to take a position of policy, you don’t look at problems in their face and take decision. You take a decision and remain firm on that decision.
“We think that what this country is lacking today is our ability to dispense equity and justice. It may be difficult, it may be a bitter pill but we need to stand with the truth.”
The Tide source reports that at the meeting were governors of Enugu, Rivers, Akwa-Ibom, Bayelsa, Abia and Oyo States.