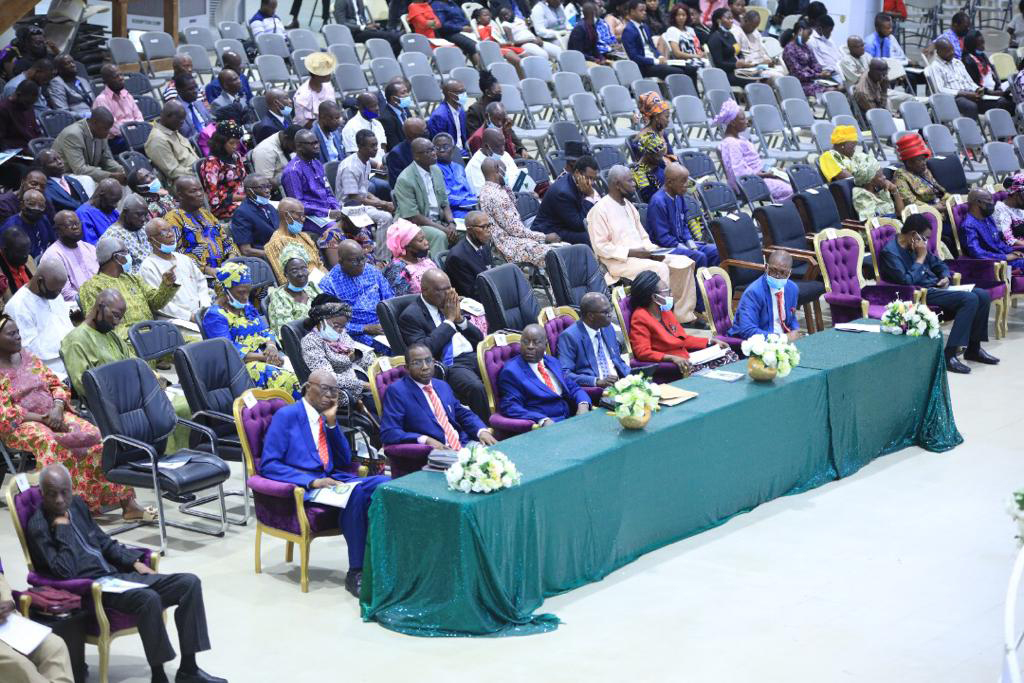 The General Overseer of the Redeemed Christian Church of God (RCCG), Pastor Enoch Adeboye has created the Office of Directorate of Politics and Governance to engage members willing to be involved in politics and “mobilise support for them when required”.
In a memo addressed to all regions, provinces, zones and other levels of the church, the mission said the directorate was created for political education of its members.
The directorate, it was learnt, would also prod members of the church to obtain their Permanent Voter Cards ahead of the 2023 general election.
The memo dated February 28, 2022, and titled, ‘Office of Directorate of Politics and Governance’ has the reference number: RCCG/AGO/ADM/AA/MEMO/20/01/2022.
It was signed by the Assistant General Overseer in charge of Administration and Personnel, Pastor John Odesola.
The memo partly read, “We write to formally notify you that the mission authority has created the Office of Directorate of Politics and Governance in the RCCG. Further to this, Pastor Timothy Olaniyan (PICP Lagos Province 12) has been appointed to lead the office.
“You are kindly requested to appoint with immediate effect a Provincial Officer for your province and also ensure that the same is done at all levels of the church – zone, area and parish. The essence of this directorate is to help coordinate the engagement of our people who are willing to be involved in politics as well as mobilise support for them when required.”
RCCG, therefore, asked that its parishes send the details of its nominated coordinators for the office to Odesola within two weeks of receipt of the letter.
When contacted, yesterday, RCCG Head of Media and Public Relations, Pastor OlaitanOlubiyi, said the directorate was to sensitise members of the church for active political participation.
He said, “One thing I know is that we have a directorate on politics and governance to galvanise opinion and views to discuss issues as they occur, not only in Nigeria but globally, because as Christians we cannot afford to act ignorantly. It is to serve as a form of sensitisation (for those interested in politics) and to mobilise our people to register and play their own roles, collect PVCs. Those who are interested, let them join the political party they choose.”
Olubiyi further emphasised that while the church supports active political involvement by its members, it does not have a preferred political party.
“As far as the Redeemed Christian Church of God is concerned, we don’t have any favourite party,” the official added.
Arguably the largest church in Nigeria with parishes in over 190 nations of the world, RCCG has prominent members and pastors in governance including Vice-President YemiOsinbajo (SAN); wife of All Progressives Congress (APC) Leader, RemiTinubu; amongst others.
Although Bola Tinubu has declared interest to contest the highest political seat in the land, Osinbajo has yet to officially declare an ambition.
However, his supporters have been urging him to succeed his principal, President MuhammaduBuhari, come May 29, 2023.
With about a year to the next general elections in Nigeria, the political climate is becoming charged as political gladiators have started permutations on who to put forward as the presidential flagbearers of the two main parties – the APC and the Peoples Democratic Party, even as presidential primaries are expected to hold anytime soon.
Serial defections have also occurred in the last few months as part of posturing for who will occupy the much-coveted seat in Aso Rock just as the debate for zoning between the Southern and Northern regions has also dominated public discourse.
The 17 southern governors at various times had unanimously demanded that the next president must come from the region after the eight-year tenure of Buhari who is from Katsina State in North-West Nigeria.
On January 1, 2022, while announcing his New Year prophecies, Adeboye said God has not told him who would become Nigeria’s President in 2023.
“If somebody asks me today like many people are already doing, ‘Daddy, who is going to be our next President?’ The answer is: I don’t know. ‘How can you say you don’t know? You’re Daddy’s (God’s) son.’ He hasn’t told me yet. You don’t do guesswork with prophecy,” the cleric who celebrated his 80th birthday recently said.