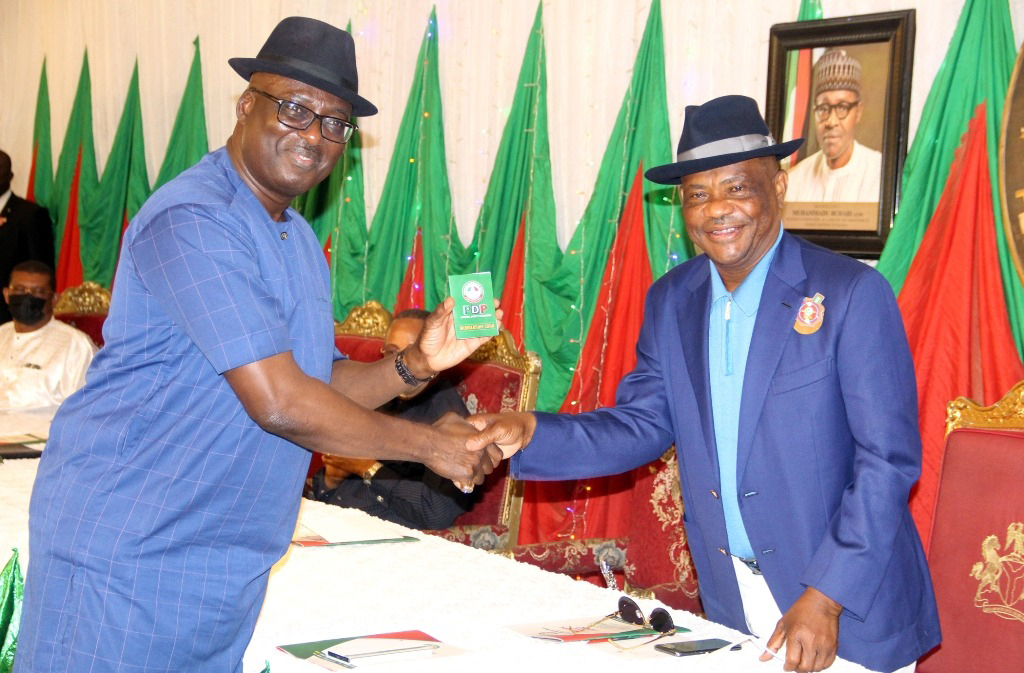 Rivers State Governor, Chief Nyesom Wike has asserted that the Peoples Democratic Party (PDP) was strong, firm in its resolve to offer better governance and willing to take over power in 2023 in order to change the fortune of Nigeria.
The governor made the assertion at a special reception, last Friday, to formally receive into PDP fold the former Deputy Speaker of House of Representatives, Rt. Hon. Chibudom Nwuche at Government House, Port Harcourt.
Wike explained that as a PDP controlled state government, his administration has touched every facet of Rivers State, and offered the people the best good governance can afford.
According to him, PDP, for what it has continued to do in terms of responding to the needs of Nigerians, has remained a household name and most trusted to savage the country.
“You’re welcome (Nwuche) to where God belongs to: The property that God owns. This property called PDP is owned by God, and that is why it is the only household organisation you can find in this country.
“No matter what happens, PDP is still very strong, very firm and very willing to change the fortune of this country.”
Wike described Chibudom Nwuche as a democrat who has a reckonable name and can add value to the PDP, and not a liability.
According to Wike, PDP woos persons who can contribute to the party, work for the welfare of the members and speak for their people.
He, therefore, urged members to dismiss fears that they would be displaced by Nwuche in the scheme of things in the party.
Wike insisted that it was better more people come to join the party since there was room for everyone, and nobody would be deprived of what was due to him or her.
“Today is another wonderful day in our political history, like one of those who has made democracy to be strong, those who contributed to what democracy is supposed to be.
“Let everyone understand that here we are not in contention with anybody. We don’t have the complexity to begin to say that people should not come back. People should not say that because Chibudom has come back, what I’m supposed to get, I will not get.
“He has come to add to our number. The more the merrier.”
Speaking further, Wike counselled the All Progressives Congress (APC) opposition factions in Rivers State to be more concerned about the performance of his administration or if it has been untruthful to Rivers people because APC has failed on its promises.
Wike said the last administration in which Dakuku Peterside served as commissioner for works, promised to construct the Trans-Kalabari Road but failed.
But his administration, he stated, was determined to prove the difference between mere campaign rhetoric and genuine intention to solve problems.
That is why, he said, the contract for the Trans-Kalabari Road project has been awarded, with a monthly payment schedule of N1billion in the next 14 months, adding that it would be commissioned in June, 2022 as first phase.
“When he (Peterside) was commissioner for works, a project they said was about N20billion, they gave the contractor N1.5billion as mobilisation. How can the project be completed? Definitely, they squandered the money. Ask him where did they lay the foundation of Trans-Kalabari Road project?
“When he was commissioner for works, he awarded the job for shore protection of Queens Town, his own area, and they diverted the money. For him, the diversion of money is good governance.
“If you like, abuse me from now until tomorrow, they will not give you ticket. So many people think that it’s only when they say Wike is not doing well, then, their party in Abuja will see them as the only ones challenging Wike. They know that they are not in existence here.”
In his remarks while presenting Nwuche to Wike, Rivers State Chairman of PDP, Amb. Desmond Akawor, also gave him party membership card and paraphernalia.
He said Nwuche’s defection was a proof of the irresistible leadership style adopted by Wike to not only provide infrastructure across the state, but continue to defend her interest in the country.
Responding, Chibudom Nwuche explained that he made mistakes out of anger to leave the PDP.
According to him, he went on sabbatical but has retracted his steps back to where he has found people-oriented leadership.
He said Wike has transformed Rivers State in the past six years, and turned Port Harcourt to a very modern city, with state-of-the-art infrastructure.
“No matter how much they hate you, they can’t deny one fact: you have worked so hard, you have put your heart in this state.”
He spoke of Wike as an empathetic leader who uses power to uplift people, reconstructed the road in his village that was abandoned by the previous administration in the state because of him.
“In politics, you meet all sorts of people. Some people persecute you, some want to bring you down but there are only few who uplift people, and he (Wike) is one of them. I am back home!
“I am a founder of the party. I began in 1999 with PDP. The PDP has become resilient. It is reinventing itself. The issues that we noticed are being addressed for the benefit of Nigerians. So, I am glad today, that I am being received by the governor.”