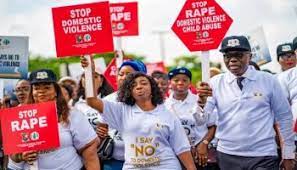 Wife of the Delta State Governor and Founder, O5 Initiative, Dame Edith Okowa, has reached out to victims of sexual abuse and child abduction in the state with material and emotional support.
During an interactive session with stakeholders, organised by her initiative, in collaboration with the state government, to commemorate the 2021 edition of 16 Days Activism Against Gender Based Violence, at Unity Hall, in Asaba, Tuesday, Dame Okowa stressed the need to give support to victims of abuse and render help where possible.
In response to Mr. and Mrs. Taiwo Ismailia’s testimony, whose 13-year-old daughter was abducted, taken to Ghana, sexually abused and returned half dead with decaying genitals, Dame Okowa promised to ensure that the state government brings the perpetrators to book.
She regretted that the dastardly act was coming after the second annual Conference of the Nigerian Governors’ Wives against Gender-Based Violence, in Abuja.
The governor’s wife said: “The Violence Against Persons Prohibition (VAPP), Law that has been domesticated in Delta State will take its full course. The governor and the Commissioner of Police will be alerted to fish out those behind this heinous crime.”
In fulfillment of the national mandate, Dame Okowa handed a cheque to the couple and reassured them that justice will be served.
She charged the Ministry of Women Affairs, Community and Social Development and the Ministry of Justice to address this missing link on communication.
“Let Deltans know that the law covers victims of violence of any sort and that it also punishes offenders.”
She advised parents to be watchful and prayerful over their children, given the times.
During the event, Dame Okowa also promised to get wheelchairs fo three other women living with disability.
In her lecture, the Director, Centre for Gender and Development Studies, Delta State University, Abraka, Dr. Joyce Ogwezi, declared Gender-Based Violence a pandemic and called for evidence based global action.
The Commissioners, Ministry of Women Affairs and Ministry of Humanitarian Affairs and Community Support Services, Mrs. Flora Alanta, and Bridget Anyafulu, respectively, at different times, spoke on the state government’s resolve to address issues of gender based violence.