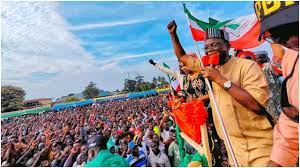 Leaders of defectors from various political parties including the All Progressives Congress, APC, who decamped to the Peoples Democratic Party, PDP, have apologised to Governor Samuel Ortom of Benue State for erroneously joining forces with enemies of the state to castigate and mock him.
The leaders included erstwhile Caretaker Chairman of Gwer West Local Government Council, Hon. Hyacinth Kwegi; a House of Assembly candidate in the 2019 general elections on the platform of the APC, Hon Ukeyima Mkem; former DGSA, Mr Titus Utuur; all tendered apologies, at the mega rally held at Naka, headquarters of Gwer West local government council.
In separate remarks, the leaders regretted when they unsuccessfully taunted the Governor on killings in Benue State by herdsmen just to support their former political parties.
They stated that despite the propaganda, most of them could not vote in their villages in the 2019 elections due to the invasion by Fulani militia under the watch of the APC-led administration, stressing that some of them benefited much from the Governor but later left him without good reason.
They appreciated Governor Ortom and his wife, Dr. Eunice Ortom as well as the entire PDP for accepting them back into the fold, even as they pledged unflinching support to the PDP.
Governor Samuel Ortom and his wife, Dr. Eunice Ortom, while receiving the decampees, assured them of equal opportunities, pointing out that in the PDP, members have equal opportunities.
The Governor stated that Nigerians would not continue to tolerate the failed leadership of the APC.
State Chairman of the PDP, Sir John Ngbede said the PDP family owed Governor Ortom prayers and unflinching support, hinting that the party would soon welcome thousands of supporters in Benue South Senatorial District.
Speaker of the Benue State House of Assembly, Rt.Hon. Titus Uba, member representing  Gwer-East and Gwer West in the House of Representatives, Rt.Hon.Mark Gbillah, and Majority Leader of the Benue State House of Assembly, Hon. Damian Cheme, also delivered goodwill messages at the event.
Others who also spoke included Special Adviser to the Governor on Local Government and Chieftaincy Affairs, Barr. Ken Achabo and Chairman Gwer West Local Government Council, Mrs Grace Igbabon.

Former president Olusegun Obasanjo has condemned attempts by those he called “political busybodies” to drag him into issues bothering on the appointment of Senator Ifeanyi Araraume as the chairman of the Nigerian National Petroleum Company Limited (NNPC).
The former president who spoke through his lawyer, Dr. Tunji Abayomi, said stories on some social media platforms accusing him of being responsible for the “immediate suspension” of the inauguration of the new NNPC board of directors inauguration were false.
Some social media platforms had claimed that Obasanjo influenced the suspension of the board’s inauguration because he wanted Araraume to step down as chairman of the board.
But this was despite an explanation by the secretary to the government of the federation, Boss Mustapha, that the inauguration would be held at a later date.
Reacting however, Oba-sanjo’s lawyer, Abayomi, in the statement, said the former president was preoccupied with efforts to better the lots of Nigerians locally, internationally and economically and as such had no time for frivolities.
Abayomi said whatever misunderstanding between Araraume and Obasanjo had in the past was over and that both had been in touch with each other and would continue to do so in the interest of the country.

Describing Araraume as an astute businessman and leader who would certainly handle the NNPC well, the statement warned against attempts by certain individuals to drag Obasanjo into the conflict in Imo State politics.