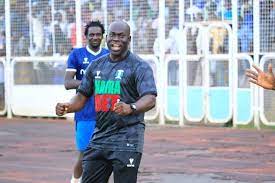 Shooting Stars Sports Club Coach, Edith Agoye, has stated that the Ibadan-based Nigeria National League side won’t celebrate yet after securing qualification to the NNL promotion playoffs to the Nigeria Professional Football League with three games to spare for the Oluyole Warriors.
Speaking in a chat with Tidesports source, Agoye said hopes are high and the team fully aware of the expectation of fans from the club especially after a fantastic run in this season’s Nigeria National League.
He added that the team will be keeping their heads down until the ultimate promotion to the Nigeria Professional Football League is achieved at the playoffs.

The Tide
The management of Rangers International FC, Enugu has approved a three-week break for players and coaches of the Flying Antelopes as the 2021/2022 season comes to an end, with August 28, 2022, as the date for the resumption of activities for the 2022/2023 season.
In a brief session with players, coaches, and backroom staff of the club, at the weekend, the Administrative Secretary, Barrister Ferdinand Emeka Ugwuarua, thanked the players and coaches for their efforts in the ended season though, he lamented the inability of the club to achieve its set targets.
Ugwuarua charged the players to be professional in conduct during the break so as to come back refreshed for the task ahead in the coming season, stressing, “We all understand that we could not achieve our set target for last season and we are desirous of achieving in the coming season, hence, I urge you to be professional in conduct during this break period so as to come back refreshed for the task ahead.”
Also speaking, the Technical Adviser of the side, Coach Abdul Maikaba praised the players and management for their determined display in the concluded season, stressing, “Even when our collective efforts did not result in achieving our set targets, I must thank you all for the cooperation shown and believe that we shall get it done in the coming season. I implore you all to display maturity as you take time off the game for the approved period and return stronger for us to strategize going into the new season.”
Recall that the Enugu landlords, Rangers International F.C ended the NPFL 2021/2022 season in the 5th spot amassing 56 points from 38 matches scoring 41 goals, and leaking in 30 goals, while they were eliminated from the Aiteo/Fed cup in the round of 32 by Oriental rivals, Heartland, 8-7 in a marathon of penalty-kicks after the regulation time, ended 1-1 inside Samuel Osaigbovo Ogbemudia stadium, Benin-City.

The Tide
A new level of organised scrabble tournament, tagged Scrabble In The Jungle Championship, will debut in the country on the 26th of this month.
The tournament, put together by Scrabble Las Vegas in conjunction with the Nigeria Scrabble Federation (NSF), will involve eight top-ranked players selected by NSF, as well as four wildcard nominees. They will compete over 36 round of games in a closed location over a three-day period.
According to the organisers, the 12 players will be kept in a boot camp, a controlled space where they will test their skills in the board game for three days without connecting with the outside world.
At the championship, the top players are expected to hunt for points on the boards using different strategies to outsmart their opponents.
The organisers added that fans and supporters would be given the chance to adopt any of the players, who they feel could win the title and the grand prize-money at the end of the show.
Speaking ahead of the championship, President of Scrabble Las Vegas, Musa Olasupo, who is the convener of the Scrabble in the Jungle series, said the desire to raise the stakes and make the sport more attractive and sustainable birthed the new variant of Scrabble in the Jungle Championship.
“The Scrabble In The Jungle Championship is a boot camp arrangement where we keep players under one roof to live, eat and drink scrabble for three days.
“Our focus is to encourage competitive scrabble that will reward excellence. This maiden edition will feature the top eight players, according to NSF July ratings, and four wildcards.
“Management of Vegas has discretionary powers on the four wildcards, but we hope to make the players of equal strength.

The Tide
The fourth edition of the Operation Safe Haven Football Tournament, also known as Major General I.S Alli Peace and Unity Tournament, has kicked off at the Rwan Pam Township Stadium.
Initiated by The Special Task Force (STF) code-named Operation Safe Haven (OPSH), the opening ceremony of the competition was attended by dignitaries from within and outside Plateau State.
In his opening remarks, the General Officer Commanding Third Division Jos, who also doubles as the Commander, OPSH, Major General Ibrahim Ali, said the tournament was significant in the peace building process towards ensuring lasting peace in Plateau State and in all the local councils within OPSH Joint Operation Area.
General Ali noted that the core essence of the tournament was to use sports as a unifying tool to emphasise the benefits of peaceful   co- existence, unity and teamwork.
Represented by the Deputy Commander, OPSH, DCP Mohammad Rabiu, the Commander described football as a universal sport that bonds people of diverse ethnic, cultural, political and religious affiliations together.
He promised to do everything possible to ensure successes recorded in the peace building efforts are not reversed, while urging the people to join hands and move away from behaviour that could subvert the collective growth of the people and enhance harmonious living.
Also speaking, the Chairman, House Committee on Navy and member representing Pankshin/Kanke/Kanam Federal Constituency, Yusuf Gagdi, applauded OPSH for improving the security situation of Plateau and other areas within its jurisdiction.
Gagdi maintained that the tournament would help to unite youths of diverse religious, cultural and political differences. He also pledged to continually support any initiative of OPSH designed to sustain peaceful co-existence in the state.
The climax of the event was the ceremonial football match between the 2021 champions, Barkin Ladi Boys and Zango Kataf Football Club.