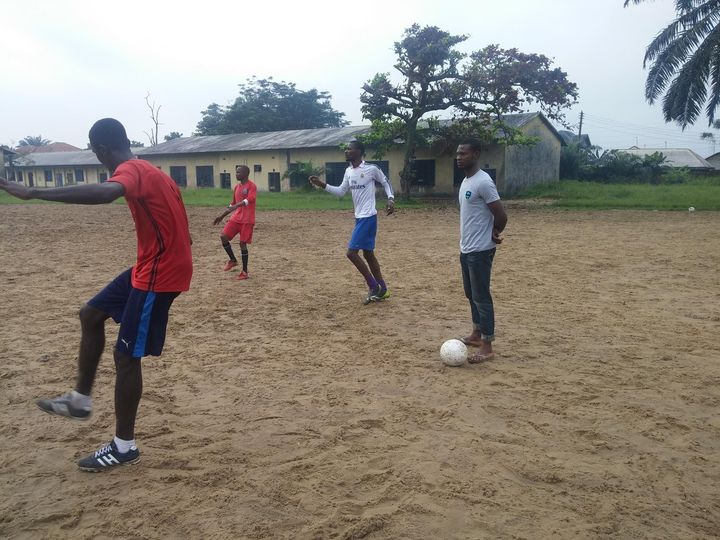 Coach of Salvation Boys FC, Toku Mike, has expressed optimism that he will get back all the points his team has lost, by winning future games at the ongoing Port Harcourt City League (PHCL).
According him, he accepted the 1-0 loss against SKE in good faith, saying that he did not know what actually went wrong, because his boys played well, adding luck was not on their side.
Coach Mike, said this, in a post-match interview shortly after his side lost 1-0 to SKE, at the ongoing PHCL, on Saturday, at Joseph Yobo, field D/L, Port Harcourt.
The Salvation Boys coach, noted that the officiating was fair and nothing was wrong with his players.
“ We give glory to God. In football business sometimes you lose, draw and win. So I accept the defeat in good fate.
I don’t know what to say, but I believe everything was normal, nothing was wrong with my boys” Coach Mike said.
Also speaking, the Coach of SKE, Sylvanus Onwuka, said his victory against Salvation Boys was well deserved because they work towards it.
According to him, his team is determined and commited to win the League.
“Our win against Salvation Boys who were unbeaten runs was well deserved, because we worked towards it.
We loss some clear chances in our previous game, but today game, we tried to convert our chance” Onwuka said.
As it stands, SKE Fc has played six matches, won five, lost one, with 15 points, topping the table. While Salvation Boys, is currently occupying third position with 12 points, played six matches, drew two, lost one.

‘We Are Intensifying Efforts Ahead New NPFL’