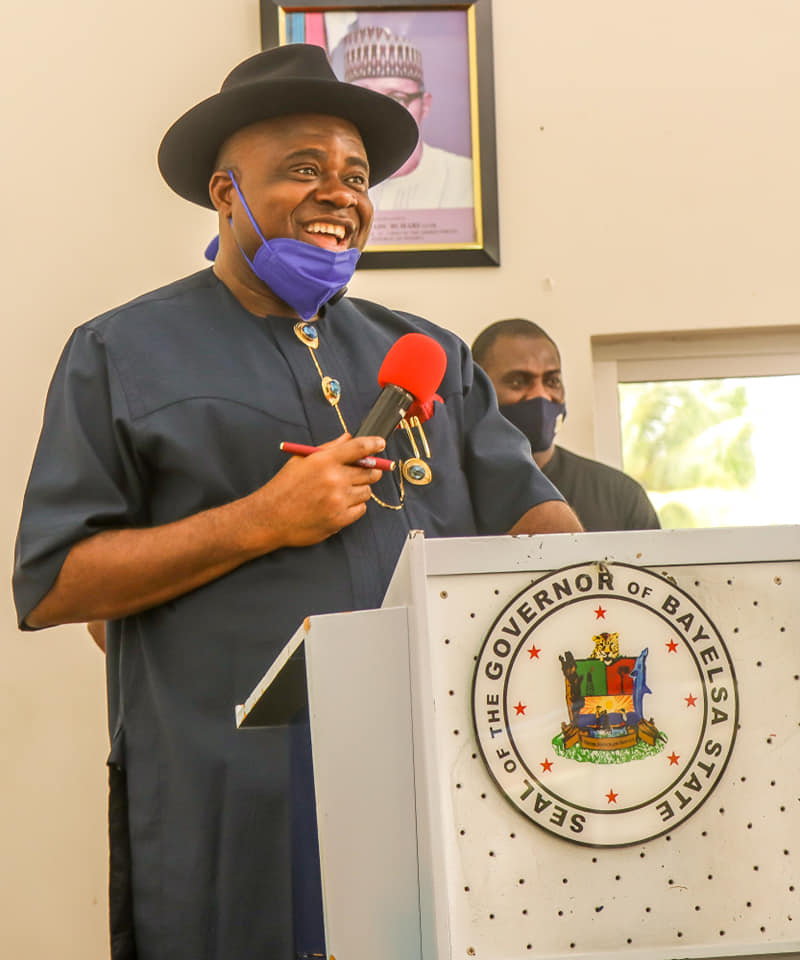 Bayelsa State Governor, Senator Douye Diri has urged the people of the state to have implicit confidence in his administration’s poverty alleviation scheme tagged “Diri Boost” which is billed to enhance the economic fortunes of the state.
Governor Diri, who made the call  at the 12th State Executive Council Meeting in Government House,Yenagoa, said that the scheme was intended to enable the people create economic value from the vast agricultural and commercial potentialities in the state.
Represented by his Deputy, Senator Lawrence Ewhrudjakpo at the meeting, he urged Bayelsans to shun baseless rumours about the interventionist programme, noting that administrative bottlenecks were responsible for the delay in the kick-off of the Diri Boost Scheme.
A statement by the Senior Special Assistant to the Deputy Governor on Media, Mr. Doubara Atasi, quoted the Governor as calling on those who applied for the Diri Boost Scheme to be patient as they would soon be engaged to transform the agricultural sector and better their lot.
While emphasizing the need for the people to keep faith with his administration, Governor Diri promised to leverage on the achievements of past administrations to bring prosperity to Bayelsans.
He used the occasion to sympathize with those affected by this year’s flood, saying government  was taking steps to cushion the effect of the menace through the relevant ministries and agencies to identify with impacted communities across the state.
“ want to thank Bayelsans for their understanding and we are asking for more understanding and support. Let us not give any attention to those rumours out there, Governor Diri means prosperity, and this government also means prosperity”, he said.
“Nobody should be in doubt as to the determination of this government to pursue the prosperity agenda having had a good foundation from restoration. The delay in the Diri Boost is as a result of administrative bottlenecks which are natural and as soon as they are cleared, Diri Boost will kick off”, he added.
In another development, Governor Douye Diri has felicitated with the state Commissioner for Education, Honourable Gentle Emelah and the Special Adviser on Political Matters Two to the Governor, Hon. Gabriel Ogbara on the occasion of their birthday celebrations.
Speaking during a brief and low-key celebration shortly after the Exco Meeting, Governor Diri described the celebrants as worthy sons of the state and wished them well.
In their goodwill messages, the Secretary to the State Government, Rt Hon. Konbowei Benson, Head of Service, Mrs Biobelemoye Charles-Onyeama and Chief of Staff, Chief Benson Agadaga, also described the celebrants as gentle and hard-working government functionaries.
Other Exco members who eulogized the celebrants included the Commissioner for Information and Orientation, Honourable Ayibaina Duba, Commissioner for Sports, Honourable Daniel Igali and his Women Affairs counterpart, Mrs Faith Opene.
Responding on behalf of the celebrants, Special Adviser on Political Matters 2,
Hon. Gabriel Ogbara, thanked Governor Diri, his deputy, Senator Lawrence Ewhrudjakpo and members of the state Executive Council for celebrating them.