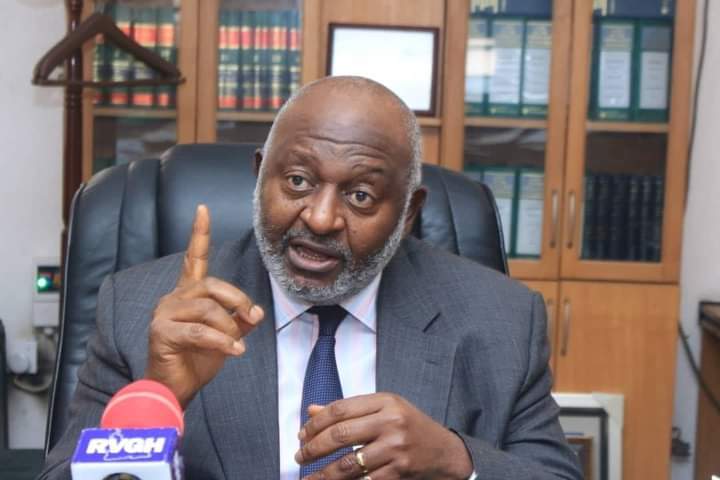 The former President of Nigerian Bar Association (NBA) and a Senior Advocate of Nigeria (SAN), Onueze C.J. Okocha, has posited that Rivers State has never been at war with the Igbos of the South-East.
Okocha, who was reacting to the curfew imposed on Oyigbo Local Government Area by the state government, in Port Harcourt, last Wednesday, asserted that the decision of the state Governor, Chief Nyesom Wike, based on advice of the State Security Council, was constitutional and done in good faith.
He described the incident that happened in Oyigbo, where members of the proscribed Indigenous People of Biafra (IPOB), killed 10 security operatives, leading to imposition of curfew in the area, as unfortunate.
He said that Rivers State and the Igbos have always enjoyed cordial relationship in areas of marriage and trading, adding that the two groups were not ready to be dagger-drawn.
The SAN stated that over 60 per cent of businesses in the state were owned by the Igbos, regretting why some individuals would be fanning embers of war among the two groups.
He said, “Our relationship is very cordial, it is only these political boundaries of states of the federation that have tended to divide people. Igbos control 50 to 60 per cent of commercial activities in Rivers State. I have many of them as my friends.
“I wonder why anybody will raise this banner of ethnic jingoism. We have never, as Rivers people, had problem with Igbos. Most of us, including myself, my mother came from Onitsha, which is one major kingdom in Igboland.”
Okocha noted that many Igbos have been appointed to serve in the state as commissioners, special advisers and heads of ministries of government under Governor Nyesom Wike, wondering why some people would claim that Igbos were hated by the state.
“So, why should anybody begin to allege oh, some of us don’t like Igbos, and I heard that unfortunate label being labelled as an accusation that our governor hates the Igbo. How can? There are Igbos in his government who are serving in Rivers State. How many Rivers people are in any government, cabinet, in that matter, anywhere else apart from Rivers State?
“But Igbos are serving in the governor’s cabinet, Yorubas are on his advisory council, are on his executive council, and many of them are activists here in Rivers State. We even have a political organisation called Indigenes Without Borders (IWB),” he said.
The legal luminary explained that the governor had the constitutional right to impose curfew on any part of the state under him, if there were threats of breakdown of law and order, to avert anarchy.
Okocha said that it was wrong for the banned IPOB members to cause public unrest in the state, having been proscribed by law, adding that the governor acted in defense of law and order, as it was a constitutional responsibility of government to do so.
“So, it is totally unlawful for anybody to begin to carry that banner of Indigenous People of Biafra (IPOB), and begin to wreak the kind of havoc that we saw play out in some parts of Port Harcourt: Mile One, Mile Two area, Emenike, Ikokwu axis, and then, in Oyigbo, a place which is the neighbouring town between us and Abia State. Most unfortunate!
“Lawlessness and unlawful assemblies ought not to be tolerated in a country that is working to have law and order, and peace to face the development of our country. So, it was very unfortunate.”
He explained that in any part of a state where there is breakdown of law and order, a governor was constitutionally obliged to impose curfew, which was exactly what Governor Wike did.
“But he has assessed the security situation, and based on the advise he got from the security agencies, I believe he was perfectly justified to impose curfew in those parts of the state where there was total breakdown of law and order,” he stated.