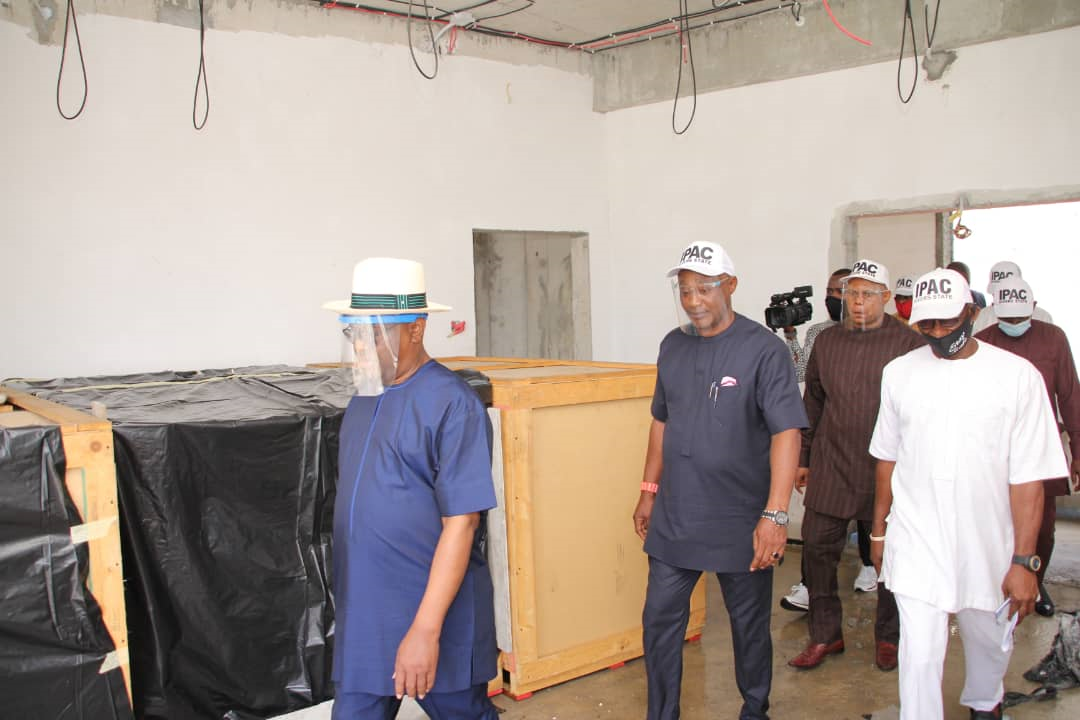 Rivers State Governor Nyesom Ezenwo Wike and the IPAC team on inspection tour of the ongoing construction of the administrative and clinic building, in Government House, Port Harcourt.

Rivers State Governor, Chief Nyesom Ezenwo Wike says development projects are executed in every local government area of the state to improve the socioeconomic life of the people.

The governor stated that such holistic commitment to development is in keeping with the promise made to the people to serve them efficiently and leave the state better than he met it.

Governor Wike was speaking when the leadership of the Inter Party Advisory Council of Nigeria, ( IPAC) paid him a courtesy visit at Government House, Port Harcourt, on Monday.

“My administration owes Rivers people a lot and nothing will slow down the tempo of provision of critical infrastructure.

“We are committed to making sure that we do what will make our people happy.

“People are surprised that even though we are in our second tenure, we are working as if we have another tenure to run. But our tenure ends in 2023 and my motivation is that we will continue to give services to the people of the state without relenting.

“I thank God that you just went to see projects within Port Harcourt. But we are doing more in the local government areas.

“There is no local government that will say they cannot find the presence of this administration. I challenge anybody to say we are not doing anything,” he said.

Governor Wike told the leadership of IPAC to put party politics aside and contribute their quota with useful suggestions that would enable him provide good governance to Rivers people.

“The whole essence of IPAC is not to be antagonistic to government,  it is about governance irrespective of political party.

“When elections are over, various parties will be more concerned how the government is serving and contribute their quota.

“What you have done here today is to tell the world what you have seen concerning what we are doing.  When all the parties have seen, it becomes easier to make the kind of suggestions that you have made. We are supposed to work as a team for the good of the state,” he emphasised.

Governor Wike urged politicians not to politicise COVID-19 but should work in concert with government to reduce the spread of the pandemic.

The governor announced that if the State receives the approved refund from the Federal Government, part of the money would be used to set up a Cancer Centre.

Leader of the delegation and chairman of IPAC,  Ambassador Desmond Akawor said the  group is  satisfied with the quality leadership provided by governor Wike and the developmental projects within the state capital that they inspected at the weekend.

Ambassador Akawor noted that the Flyover Projects, Mother and Child Hospital, Judges Quarters and the Real Madrid Football Academy are projects that would stand the test of time.

He assured the governor that IPAC would collaborate with his administration to give the state qualitative leadership.

The IPAC team were later taken on a tour of the ongoing construction of the administrative building and clinic, in Government House.