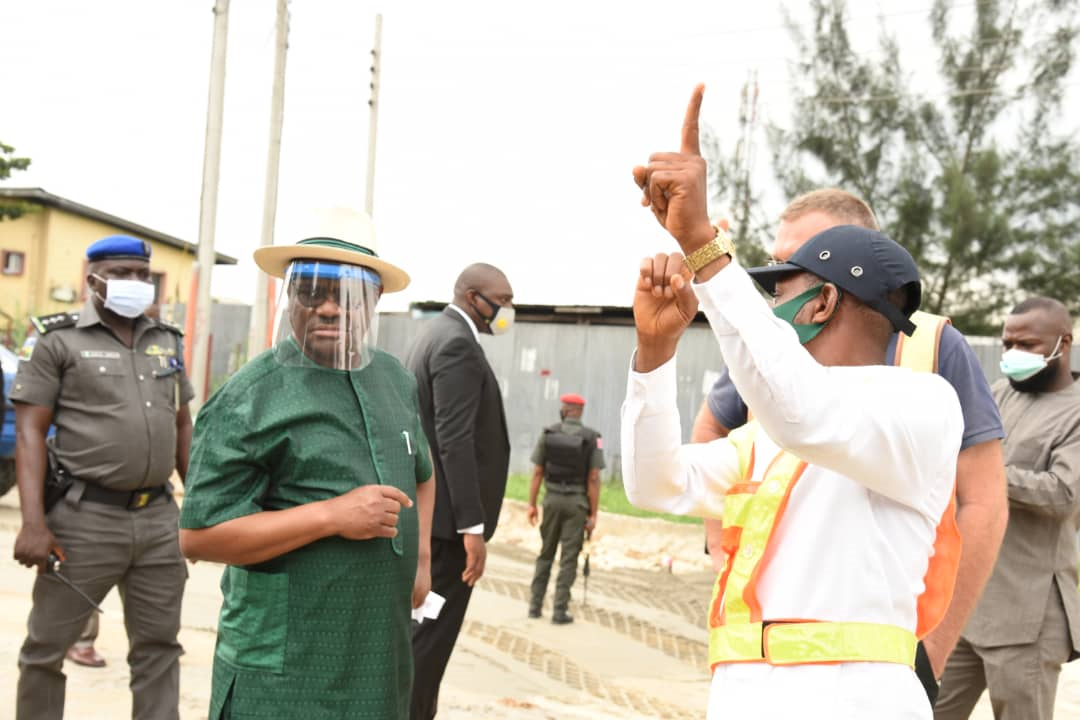 Inspection of ongoing projects in rivers state by His Excellency Nyesom Ezenwo Wike con GSSRS POS African Governor of Rivers state on the 30th of June 2020.

Rivers state Governor,  Chief Nyesom Ezenwo Wike says his urban renewal programme in the  state is successful because of financial prudence by his administration

The governor also said 10 hectares dredged land located opposite the NLNG head office will be developed to further enhance the aesthetics of Port Harcourt city under the  urban renewal programme.

Speaking with journalists after the inspection of on-going shore protection work at the sandfilled land,  governor Wike said it is amazing to have recovered such land that once served as a hideout for criminals.

He said though a decision has not been taken on what activity to approve on the land,  Julius Berger construction company has been asked to start the provision of infrastructure that can serve for residential or commercial purposes.

“Everybody knows that the place used to be mangrove area that served as criminals hideout opposite the new NLNG head office, but we were able to reclaim it.

“The work men are doing a good job there, it is not less than 10 hectare of land, and it is a very lucrative site for everybody who wants to carry out productive activity. We are also happy that we are now doing the shore protection.

“We have asked Julius Berger to  go there for the provision infrastructure so that tomorrow if it is for residential,  mixed development or commercial, we know that the infrastructure is already provided,” he said.

“We went to Aba Road to see a property that was abandoned for over twenty years. What we are doing now is to bring it back to what it is supposed to be.

“At the new GRA, we are making sure that the roads are completed as promised the people and they are handled by Julius Berger construction company. You can see that Port Harcourt has changed because of the various construction works.

“The urban renewal programme is a great success as far as we are concerned.  So many people are asking to know where we are getting the money when there is covid-19.  What’s important to us  is management. When once you know how to manage resources,  you will not have problems. We are also impressed with the reaction of the people,” he added.

The governor also said the last five years of his administration has been remarkably successful because of the help of God.

He recalled how the former governor of the state had mocked that there would not be money anywhere for him to pay salary and to provide infrastructure but he had surpassed it and the people are not disappointed too.

The governor also inspected the Elelenwon street and the Woji Road in the new GRA.