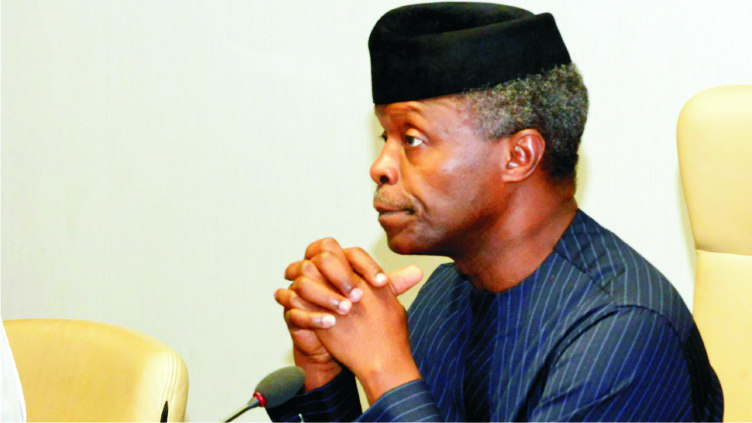 The Vice President, Prof Yemi Osinbajo has tested negative for Coronavirus, 24 hours after he went into self-isolation following fears that he could have physically interacted with some persons who tested positive.
In a tweet by the Special Adviser to the President on Political Matters, Senator Babafemi Ojudu, the Vice President’s results have returned negative.
“Vice President Yemi Osinbajo tested negative,” he tweeted, yesterday morning.
The Senior Special Assistant, Media and Publicity to the Vice President, Mr Laolu Akande, had last Tuesday disclosed that Osinbajo has begun observing social distancing and self-isolation.
“VP Osinbajo, yesterday, at the office conducted his meetings via video conferencing while observing social distancing.
“Today, he continues his work from the home office, as he is in self-isolation in accordance with NCDC protocols,” he tweeted Tuesday evening.
As at yesterday morning, the total number of confirmed cases in Nigeria had swelled to 46 following the announcement of two new cases in Osun and Lagos by NCDC.
Also, the Osun State Governor, Prof Gboyega Oyetola said he has tested negative for the novel Coronavirus after he attended events in Abuja.
At a press briefing, yesterday, Oyetola reported that his wife has also tested negative for the virus.
Oyetola verified his status as Abuja now has the second highest number of reported Coronavirus cases in the country, after Lagos.
“Considering the fact that I was in Abuja for the better part of last week, as a way of leading by example, I have also subjected myself to test. My wife, because of her recent travel history, also subjected herself to test. Both came back negative”, Oyetola said.
Oyetola, thus, appealed to citizens to take the necessary action to avoid any precarious transmission.
“I want to passionately encourage all returnees from UK, US, Europe, the West African Coast, and indeed, other high risk countries to self-isolate and submit themselves to test, so as to assist the government in containing the spread of the virus,” he said.
Similarly, the Governor of Ekiti State, Dr Kayode Fayemi, yesterday, went into self-isolation after he had contact with Bauchi State Governor, Malam Bala Mohammed, who tested positive for Coronavirus.
Mohammed, had last Tuesday, confirmed that although he has no symptoms, he has been confirmed positive after having physical contact with Alhaji Atiku Abubakar’s son.
The Chief of Staff to President, Abba Kyari, also tested positive to the deadly disease after returning from Germany, recently.
Fayemi on his Twitter page said he has sent his samples for test after coming in contact with two people who have tested positive to COVID-19.
The governor was present at the Nigeria Governors Forum (NGF) and National Economic Council (NEC) meetings which had Governor Bala Mohammed present.