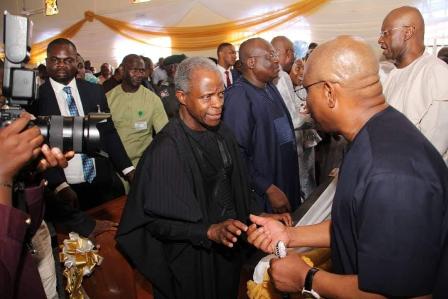 The Vice President, Prof Yemi Osinbajo, President of the Senate, Dr Ahmad Lawan and Secretary to the Federal Government, Mr Boss Mustapha, are among political elites at the thanksgiving mass of the Deputy Senate President, Sen Ovie Omo-Agege in Effurun, Uvwie Local Government Area of Delta State.
The service, which held at the Mother of Redeemer Catholic Church, Effurun, started at about 10:40 am, yesterday.
The Delta State Governor, Dr Ifeanyi Okowa; Rivers State Governor, Chief Nyesom Wike; Kaduna State Governor, Nasiru el-Rufai; Jigawa State Governor, Alhaji Muhammad Badaru Abubakar; and Imo State Governor, Senator Hope Uzodinma were among serving state chief executive officers at the service.
Other dignitaries include, the National Chairman of the All Progressives Congress (APC), Comrade Adams Oshiomhole; Minister of State for Petroleum Resources, Chief Timipre Silva; Minister of Special Duties and Inter-Governmental Affairs, Senator George Akume, and former governor of Delta State, Dr Emmanuel Uduaghan.
In attendance at the service were, Senators Ibikunle Amosun, James Manager, Rochas Okorocha; Delta State House of Assembly Speaker, Chief Sheriff Oborevwori; NDDC Executive Director of Projects, Dr. Cairo Ojougboh; member, House of Representatives, Hon Francis Waive and several others.
Also present are notable traditional rulers from Delta State, including 103-year-old Chairman of the Forum of Urhobo Traditional Rulers and Ohworode of Olomu Kingdom, Ovie Ogbon, Ogoni 1, Orodje of Okpe; Olu of Warri, Ovie of Uvwie, Ovie of Agbon, Ovie of Agbarha-Otor, among others.
In his homily, Very Rev. Fr. Anthony Ozele, charged the congregation to shun hatred but show love to everyone who has hurt them.
He said that only by so doing will the country be able to heal the wounds of the past, and forge a common ground towards building a strong, united society, where peace, security and sustainable economic growth would thrive.
The cleric attributed the rising security challenges to the high rate of intolerance, hatred and greed among Nigerians, especially the elites, and called for genuine reconciliation to enable the country move forward.

Ash Wednesday: Christians To Dress In Black To Protest Killings