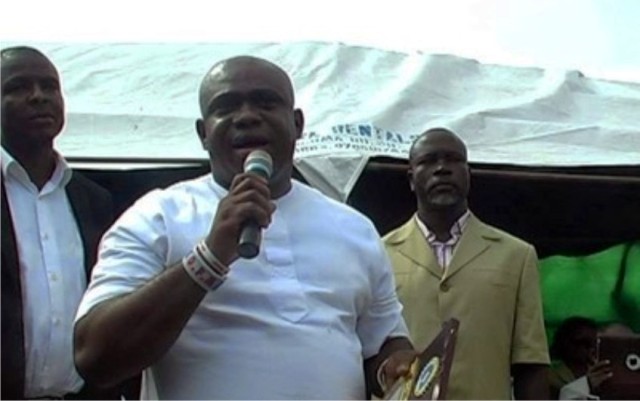 The General Overseer of Omega Power Ministries Worldwide, Apostle Gift Chinyere Chibuzor, has advanced reasons for donating an estate of five flats to Mrs Adaugo Chima Ikwunado, the widow of Ikoku mechanic who died in Police cell in Port Harcourt, Mr Chima Ikwunado.
Apostle Chibuzor said he extended the goodwill to the deceased’s wife so that she would not suffer with her unborn child.
The cleric, who gave the explanation while handing over keys to the estate to Mrs Ikwunado at Mgbodo area of Aluu Community recently, said it was what her late husband would have done if not for the fact that he met his untimely death in a police cell.
“From henceforth, this is your house, you and your child so that you will not suffer. This is what your husband struggled and hoped for, but could not provide you because of his untimely death. I now stand in for him to provide you that comfort from the tithes and offerings of the OPM Church as I was moved by God”, he said, adding that the house is forever.
According to the man of God, Mrs Ikwunado would live in the one bedroom flat and then, rent out the remaining flats so that she could be feeding from the accruements.
Said he,” I will still give you more money to start business and also provide more money to your husband’s parents. This is what Chima would have done for them if he were alive.”
Apostle Chibuzor further indicated that “the natural thing is for children to bury their parents at death but in this case, they are the ones burying their child which is sad. I shall help them and not allow them to suffer because of late Chima, who was our member even though I did not know him one-on-one. He worshipped at Iwofe branch as I was told, while I ministered at the headquarters. We don’t abandon our members.”
In her response, the wife of late Chima amid tears, thanked Apostle Chibuzor for his unprecedented intervention and generosity which have automatically changed her condition, and prayed God to grant him good health, long life and prosperity.