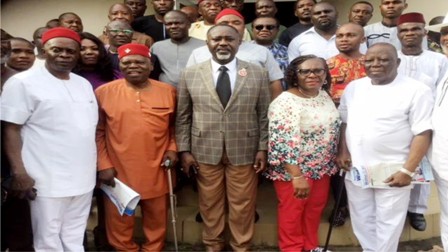 The Nigeria Customs Service (NCS) says it has obtained the approval of President Muhammadu Buhari to begin electronic clearing of imported and exported goods in the country.
The Service said the e-clearance would transform the operations of Customs and provide for faster clearance of goods.
Comptroller General of Customs, Hameed Ali, disclosed this at the weekend during the graduation ceremony of 40 officers from the Senior Course 3 session at the Customs Command and Staff College in Gwagwalada, Abuja.
Ali said, “Export and import processing will be paperless. Your performance evaluation report will not be written on paper; you will fill it online and your superior will assess you online”.
He challenged Customs operatives to have a mindset of training to adopt the skills once the clearance technology is deployed.
The Comptroller General noted that the Customs Command and Staff College would have its name changed to Training and Doctrine Command following the Board’s approval.
Also speaking, Acting Deputy Comptroller General and Commandant of the College, Elisha Chikan, said the college had graduated two other senior sets since 2017.
He said of the 40 students that were admitted into the college, 39 graduated because the management lost one student to the cold hand of death.
“Although 40 students were admitted for the course, today, we are graduating 39 because we lost one of them”, he said.

A total of seven  sea going vessels laden with Frozen Fish (FF), Premium Motor Spirits (PMS), Crude Oil and other cargos are expected to berth at different terminals today at Eastern Ports to discharge cargoes.
This was contained in the ships manifest obtained from the Weekly Shipping Position Magazine published by the Nigerian Ports Authority (NPA) and made available to The Tide in Port Harcourt.
The manifest listed Rivers Port Complex and Warri Ports as expecting the vessels today in the Eastern Ports.
The publication noted that the ships were laden with FF, PMS, Crude Oil, Containers and inballast respectively.
The publication gave the names of the vessels due for Rivers Port Complex as MSC Wave F, Frio Las Palma’s, Safe Sea Neha iii.
Ships for Warri Port include Elizabeth G. Spirit, Tokachi Frost, Kings and Lowe.
The Agents for the ships includes  Mediterranean Shipping, Super Maritime Nig. Limited and Master Energy.
Other Agents for Warri Port include AMCO, Samcham, Ocean and Port Marine Logistics and West Atlantic Ports Service Nig Limited.
The management further noted that the berthing of the ship with the cargos would  create more markets for Frozen Fish, PMS, Crude Oil and Container markets
The arrival of the vessels in the region would also  create menial jobs for youths and alleviate poverty.

The Nigeria Customs Service (NCS) has advocated for the use of drones, Close Circute Television (CCTV) and body cameras by its officers to monitor, fight and suppress smuggling activities in the country.
The Customs boss, Federal Operations Unit, Zone A, Deputy Comptroller Hussein Ejibunu, stated this at the 2022 Annual General Meeting of the League of Maritime Editors and Publishers at Administrative Staff College of Nigeria (ASCON), Topo, Badagry, Lagos.
According to the Controller, “the procurement and deployment of drones and CCTVs along the border areas will monitor the activities of smuggling and smugglers without necessarily deploying the field officers.
“A central monitoring centre will identify spots where offending items are stockpiled and with just one stop operation, the items will be evacuated under heavy detachment of officers.
“This will avert regular confrontations between officers and smugulers”, he said
He continued that “technologically equipped patrol vans and the use of body cameras by patrol officers will reduce to the bearest minimum most allegations of extortions levelled against officers while on patrol.
“The communication gadgets installed in patrol vans will also ease communication gaps between different patrol teams at different points. Should there be any crisis in any given location, reinforcement will not suffer hiccups”.
On trade facilitation, the Controller noted that “there is no gain saying, therefore, that trade facilitation has received a great boost with the introduction of technology at different levels to unbundle clearing procedure bottlenecks.
“The anti-smuggling operations have not received the much desired attention. But with the promise of Comptroller-General of Customs to procure and supply CCTVs and body cameras to the enforcement arm of the Service, it will completely change the narrative positively.
“The world being referred to as a global village is not borne out of rethorics but founded on advancement and development of technology in all aspects of human endeavours”.
Speaking earlier, the Moderator of the event, Otunba Kunle Folarin, who is the Chairman, Port Consultative Council (PCC) cum Chairman, National Seafarers Welfare Board (NSEB), noted that many countries in the world, particularly in Africa, have embraced information technology, saying that Nigeria has to embrace it too.
Folarin said in trade facilitation, the use of information technology “is the focal point. In trade facilitation, application of CCTV, digitalised technologies, social media, and the issue of surveillance are all necessary to enhance the trade facilitation”.

The Leadership of Maritime Workers Union of Nigeria (MWUN) has raised concern over what they call the Federal Government’s neglect of aged seafarers in the country.
Noting that the Federal Government has failed in payment and compensation of aged seafarers in the country, MWUN said the aged   seafarers worked for the defunct Nigerian National Shipping Line (NNSL), but had been neglected by the Federal Government.
President General, MWUN, Prince Adewale Adeyanju, said the Federal Government had refused to pay the entitlements of the ex-NNSL seafarers because they did not have employment letters.
“Those aged seafarers had contributed immensely to seafaring in this great country. Where are they today? Where is their right? Who is to pay them.
“But with the coming up of National Joint Industrial Court (NJIC), those issues will be discussed during the technical session.
“I want to urge the Director General (DG) of NIMASA, through the office of the Executive Director, Maritime Labour and Cabotage services, that the privileges of the aged seafarers be considered”, he said.
According to him, “letters of employment can be determined by the discharge books, if the government has the love of those seafarers in their hearts”.
This, he continued, “also includes the ship owners who have used the seafarers in the past and they are still using them now. But NJIC will address this proper”.
MWUN said the NJIC was set up to negotiate and review compensation, remuneration and working conditions for Nigerian seafarers.
Adeyanju  berated shipowners for failing to attend the inaugural meeting of the tripartite NJIC held in Lagos.
“If you look very well inside this hall, it is only four or five employers of seafarers that are here,” he said.
Also Speaking, Director General, Nigerian Maritime Administration and Safety Agency (NIMASA), Dr Bashir Jamoh, charged the employers of seafarers to prioritise their welfare and adhere strictly to the terms of Collective Bargaining Agreement (CBA).
“A review of the Collective Bargaining Agreements is needed for improved wages and living standard for seafarers operating in the Nigerian territorial waters, who undoubtedly are an integral part of the maritime sector.
“The ongoing review by the NJIC is timely because it comes at a time when we are in the process of reviewing both the NIMASA Act and the Merchant Shipping Act with the outcomes of the tripartite negotiation by the NJIC to be inputted into both amendments to ensure that they are binding.
“The importance of this gathering is determined by the need for adequate compensation, remuneration and workplace conditions for Nigerian seafarers, and for employers of labour to ensure responsible conditions of service guiding seafarers employment in line with global best practices, he stated.