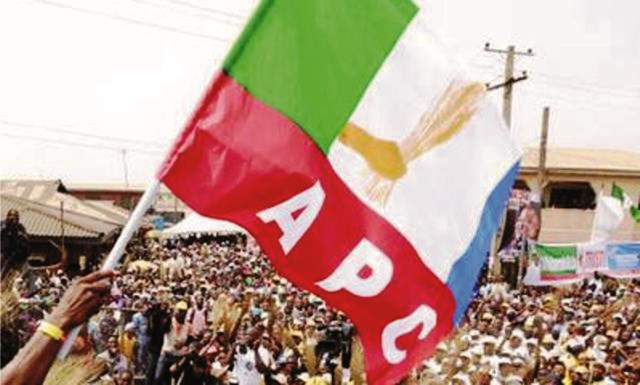 The APC National Vice Chairman, South-South Zone, Ntufam Hilliard Eta, has described the purported suspension APC National Chairman Comrade Adams Oshiomle, Edo State Governor, Mr. Godwin Obaseki, the state Deputy Governor, Mr. Philip Shuaibu, the State Secretary to the state government, Osarodion Ogie, the state party chairman, Anslem Ojezua, and a host of others as null and void.
Eta made the remark while briefing journalists on the issue in Calabar, saying that the leadership of the party in the zone would not accept the suspension.
Eta’s position contradicts the position of the APC National Secretary as announced by is National Publicity Secretary, Malam Lanre Issa-Onilu, who said the party has rectified the suspension, an indication that the leadership of the party was divided on the issue.
Eta, who barred his mind on the current crisis rocking the ruling party in the state, also said the alleged suspension of the National Chairman of the APC, and some members of his faction by a faction of the party in the state is also unlawful and illegal.
The APC Chair stated that actions of both factions violate the provisions of the constitution of the APC on the suspension or sanctioning of any member of the party.
Eta said, “South-south zone of the party will soon convene an emergency meeting to ensure that the crisis bedeviling the party in Edo State is resolved.
“I am quiet shy about commenting on the crisis in Edo state. I had wanted time to do what is needful in terms of reconciling the crisis in Edo state, address some gray areas in the crisis that has engulfed Edo state.
“You may want to know that apart from the National Executive Committee, it is the Zonal Executive Committee that sees to this kind of issue.
“We intend to convene an emergency Zonal Executive Committee meeting to look into the whole matter.
“Having said so, I am not in a position to take sides in the matter in Edo state. But let me say, I have read and seen in TV and newspapers, as well as in the social media the various sanctions and suspensions starting from the National Chairman, who was said to have been, suspended, to the Governor, his Deputy , the Secretary to government, the Chairman of the party, and even the state secretary of the party.
“My take on the issue is that none of those processes lived to the expectations of the Constitution of the party. So, as for me as an individual, they are all null and void.”
He further stated that there are constitutional provisions, and processes that must be followed for any member, let alone elected member of the party, to be suspended.
“The truth of the matter is that political parties are made up of human beings. There are constitutional processes, and step that you take before you can sanction people.
He said one of the greatest ingredients in the process is that every person accused must be given an opportunity to react, rather than going ahead to slam suspension order on the individual without listening to his side of the story.
Eta maintained that the whole process is undemocratic, dictatorial and tyrannical, hence the suspension is null and void.
He called on those behind the suspension order against the to have a glimpse at the constitution so as to know how to go about it.