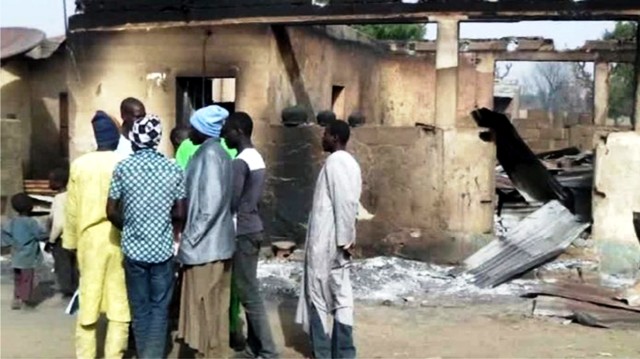 No fewer than 26 people are now feared killed and several others critically injured following a Boko Haram attack on a village in Madagali Local Government Area of Adamawa State.
It was gathered, yesterday, that the insurgents, riding motorcycles, stormed the Kudakaya village in large numbers around 7pm on Monday.
A local vigilante member said, “Many victims fell to the attack. I saw corpses of 26 people and there are several others that were critically injured and taken to hospital.”
A former Chairman of the Madagali LGA, Abawu Ularamu, supported the anonymous vigilante member’s account, and added, “They (Boko Haram) burnt several shops and many homes. They also stole food items.
“As I am talking to you now, we are living in an atmosphere of despair and agony for this attack. Over 20 people were killed while many were injured and rushed to hospital.”
He said the insurgents must have arrived the community from Sambisa, a forest in neighbouring Borno State dreaded for being a hideout for Boko Haram despite it supposedly having been cleared of the insurgents by soldiers.
‘’There is no doubt the attackers came from Sambisa. We experience such periodic attacks from Boko Haram, who usually look for food. They are not far from us. Any slight opportunity, they may strike again,” he said.
Villagers fled the attack but returned, yesterday, to bury the dead left amid the charred wreckage of their homes.
“They opened fire on residents, killing 26 people,” the community leader, Maina Ularamu, said, adding, “They burnt several homes.”
Ularamu disclosed that he lost three brothers-in-law in the attack.
Another resident, Paul Waramulu, said, “Two-thirds of the village has been burnt”, giving the same toll of those killed.
Waramulu said the fighters had looted food supplies before setting fire to buildings.
Many villagers were terrified and were still hiding in surrounding bush, and those who came back did so to give funerals to those killed, he added.
The Adamawa State Police Public Relations Officer, Othman Abubakar, confirmed the attack.
Abubakar said, “Yes, I was briefed that members of the dreaded Boko Haram insurgents have attacked the village.”
He, however, could not confirm the casualty figure.
Abubakar merely said, “I am yet to get the casualty figure but security operatives were deployed and are on the top of the situation.’’
Madagali has since just before the March/April elections been frequently attacked by Boko Haram.
It lies some 285 kilometres (177 miles) north of the state capital, Yola.
The community shares the bad luck of being haunted by the insurgents with nearby Michika LGA.
Together, they are the two LGAs in Adamawa State that have been attacked by Boko Haram a number of times in the last couple of months.
The decade-long jihadist conflict has killed tens of thousands of people and forced millions from their homes.
The violence has spread to neighbouring Niger, Chad and Cameroon, prompting a regional military coalition against the jihadists.
Meanwhile, the Wukari Local Government branch of the Tiv Cultural and Social Association, Taraba State, yesterday, rejected what they described as a one-sided peace committee in resolving the Jukun/Tiv crisis in the area.
This is contained in a press statement issued in Jalingo and signed by the association’s Chairman, Elder Paul Igo, and Secretary, Mr. Anthony Shembee.
The association, in the statement, condemned the senseless killings and destructions occasioned by the Jukun/Tiv crisis which largely affected the Tiv people of Taraba, and faulted the non-inclusion of Tiv people of Taraba State in the peace committee.
“We commend the move by the government of Taraba and Benue in constituting a peace and reconciliation committee that would bring lasting solutions to this lingering crisis.
“In as much as we commend the initiative to constitute a peace committee, we reject in its entirety the non-inclusion of a Tiv person from Wukari LGA of Taraba State in the committee.
“We want to place it on record that Kente, where the crisis started, is in Taraba State and the public should note that Ikyaior, Gbor-Gbor, Iorlumun Nege, Ioryina Tor-Musa and Tar-Orshi, among other communities that were burnt down in the crisis by Jukun youths are all in Taraba State.”
They noted that the non-inclusion of the Tiv people of Taraba State in the committee was a deliberate move by some actors to sell a wrong narrative to the public that the crisis is between the Jukun of Taraba and the Tiv of Benue.
The association, which said they viewed the non-inclusion of the Tiv people from Wukari LGA into the committee as an oversight on the side of the government of Taraba State, called for a review of the committee.