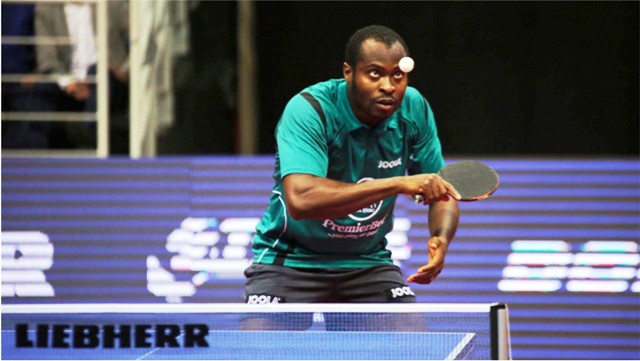 Plans are underway to have the Super Eagles move their home games to Abuja after Dangote Group handed over the rehabilitated MoshoodAbiola National Stadium, Abuja to the Ministry of Youth and Sports Development.
Contractors, Aron Nigeria Limited, handed over the rehabilitated stadium to the Minister of Youth and Sports Development, Sunday Dare, on Friday.
The rehabilitation work was carried out on the main bowl pitch and scoreboard.
Tidesports source reports that Dare had clamoured for the return of the Eagles to Abuja on several occasions, stating the need to have a permanent home stadium.
The Eagles last played at the Abuja stadium in 2012
“It is my wish that the Super Eagles and indeed the national teams of Nigeria, like elsewhere, have a permanent venue to play their matches rather than playing from one place to another,” Dare said last month while speaking to State House correspondents.
“There are great benefits for countries’ national teams to have a particular venue where the players understand very well. I believe very soon the Super Eagles will be playing their matches in Abuja or Lagos if the national stadium is fully ready too.”
In the last 10 years, the Eagles have played their home games at the GodswillAkpabio Stadium Uyo, Samuel Ogbemudia Stadium, Benin and AdokiyeAmiesimaka Stadium, Port Harcourt.
They, however, made a return to Lagos after 10 years and for the first time for a competitive match in 20 years when they played Lesotho in the 2022 World Cup qualifier at the TeslimBalogun Stadium on March 30.
They ended up playing their remaining World Cup qualifiers and the 2021 Africa Cup of Nations qualifiers in Lagos.
While the Eagles were hoping to make the TeslimBalogun Stadium their new home, news emerged last week that the Confederation of African Football had banned the stadium from hosting matches.
In a letter dated October 17, which was sent to the Secretary-General of the Nigeria Football Federation, Mohammed Sanusi,CAF said the stadium “lacks the CAF criteria and requirements in order to properly host international competitions”.
The letter signed by CAF Development Director Raul Chipenda said the stadium failed to implement the recommendations addressed to the NFF after the previous inspection.

Justice O.C. Agbaza of the High Court of the Federal  Capital Territory (FCT) has issued a restraining order, barring Bash Ali from further making or publishing any denigrating or defamatory material against the Minister of Youth and Sports Development, Sunday Dare.
Tidesports source reports that the Minister had far back as June 25, 2021, approached the Federal High Court, Abuja division seeking a restraining order and charging Bash Ali with libel and defamation of character.
The lawyers to the minister from the Keyamo Chambers spent months unable to serve Bash and the judicial workers strike. Upon resumption and with the serial defamation by Bash Ali continuing, the lawyers approached the court. This time, the Keyamo team and Wole Olanipekun team as counsels secured the restraining order.
It would be recalled that sometime in April 2021, Bash Ali had in a letter, which he made available to the public, made several allegations against the Minister.
The Minister denied those allegations and to assert his innocence, the Minister filed Suit No. FCT/HC/CV/1269/2021seeking injunctive reliefs and pecuniary damages from Bash Ali on account of the defamatory publication.
Despite the pendency of this suit, Bash Ali recently published a video on social media in which he repeated those false allegations against the Minister and also issued several threats against the Minister and the Ministry.

Nigeria’s Jibril Saidu has been elected the new secretary of the Commonwealth Handball Association.
The election, which took place via zoom on Monday, saw Saidu emerging unopposed but still polled 100 percent of the available votes.
Saidu,a former player became the second Nigerian to be elected as Secretary-General of the Commonwealth Handball Association succeeding General Ishola Williams who held the same position for almost three decades.
Also, Ruth Saunders, former President of South Africa Handball Federation defeated Steve Neilson of Scotland to become the first woman president of the Association.