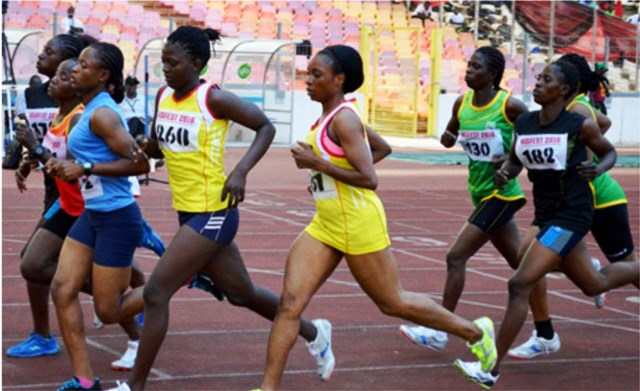 Ekiti State athletes have expressed their unhappiness with the Ekiti State Sports Council over the N15,600 allowance paid to them by the council for their participation in last month’s Abuja 2018 National Sports Festival.
The state finished 31st at the festival with two silver and four bronze medals. National junior table tennis champion Esther Oribamise led the state to win bronze in the women’s team and women’s doubles events in Abuja.
Oribamise said she rejected the N15,600 because the council agreed to pay her N100,000 for the competition.
The Ekiti State University student lamented that the state failed in their promise to her despite not giving her and her teammates the best preparations for the Games.
She said the state’s athletes were paid N15,600 each after their arrival in Ekiti from the festival, which she rejected.
Other athletes, who spoke on condition of anonymity, said they were unhappy with the way they were treated by the state but only collected the money because they had no option. Oribamise said, “Before the festival, I was approached by Rivers State to compete for them and we agreed that I would be paid N80,000 monthly for a year. Unfortunately, some officials of the Ekiti State Sports Council learnt of the proposal and urged me to drop the idea and stay with the state at the festival.
“I refused because since I first represented Ekiti in the festival at Eko 2012, I had been neglected by the state. Medal winners at the Eko festival were promised employment by the state government. Fortunately for me, I won bronze in the team event but while the other medallists were employed, I was told after Eko 2012 that I could not be given employment because I was too young – I was 12 years at the time.
“I pleaded with them to convert the employment to scholarship but no one listened to me and I was left alone until I secured admission into the Ekiti State University and the Vice-Chancellor gave me a scholarship.”
The former African junior champion added, “So when they came this year, I refused to represent Ekiti but the officials threatened me, my coach and my parents that my scholarship at the university would be withdrawn if I went to another state. After much plea and threats, I agreed to play for Ekiti but I told them that I would be paid N100,000 for participating and the officials agreed.
“What we went through before and during the festival are indescribable but we came back with some medals. When we reached Ekiti, each athlete was given N15,600, which I refused. I have told them to pay me the agreed N100,000 but no one is attending to me again. “Ekiti has been unfair to athletes and they want us to remain faithful to the state after neglecting us.” Another athlete, who spoke on the condition of anonymity, said, “What we experienced at the festival was not encouraging. Although we weren’t camped while preparing for the event, which was why we didn’t get any allowance, we still prepared, spent our money and time. All we got for being among the few that participated in the festival was N15,600.
“Nobody was happy with it, but we collected it due to our economic situation. The poor treatment was the reason for the dismal performance of Ekiti State in the competition. We could have won at least six gold medals. I do not blame those who did not win. How could anyone have won under that condition?
“Many of us trained, but only a few were selected to participate. Some went to the event on their own, some coaches volunteered their allowances, some athletes, who sponsored themselves, were told not to expect any allowance”.