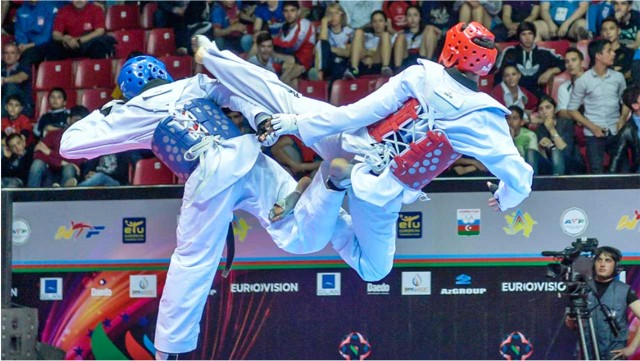 Nigeria’s Taekwondo athletes have commenced preparation for the 2024 Olympics with the assistance of the Korea Cultural Centre, Nigeria (KCCN) in Abuja.
The Tidesports source reports that the 2024 Olympics is scheduled to hold in Paris, France.
Coordinating Coach of KCCN, Abduul-Malik Mohammed, told newsmen at the kids In-House Mini TaekwandoPomsae/Gyorugi Championships in Abuja that the preparation was aimed at boosting Nigeria’s medal prospects at the Olympics.
Mohammed said the event would expose the kids to Korean culture, martial art, and instill confidence in them ahead of the 2024 Olympic Games in Paris.
He also said the championship would focus on improving the skills of kids’, noting that it was a grassroots programme.
“It is what we do every time to enable the kids’ exhibit what they have learnt overtime. The bottom-line is to prepare them for 2024 Olympic Games,” he said.
The coach said that KCC decided to hold the championship since the regular Chika Chukwumerije championships had not held for some time.
He said the mini championship was a good initiative that would be of immense benefit to Nigeria, given the quality of the equipment in the centre.
“Since we don’t have external grassroots programmes to feature the children, we felt that continuing the in-house mini championships will boost their morale.
“We are working on sending some of the children to Korea for more training during the World Youth Taekwondo Camp. We are supposed to have one this year, but it was not budgeted for.
“But KCC have been given the assurance that by next year, God willing, we will start taking them through the World Youth Taekwondo Camp,” he said.
No fewer than 40 children took part in the championships.
In the Olympics style sparring for over 10 and above, Faisal Muazu came first, while IkechukwuChizea and NwachukwuChizea came second and third respectively.
For the Poomsae for yellow belt, Faisal Muazu came first, while Enejoh Michelle and JuhitaSree came second and third respectively.
NwachukwuChizea emerged the winner in the Green/Blue Belt Poomsae, followed by NdubisiChizea and NimishaDeshmukeh in the second and third positions respectively.