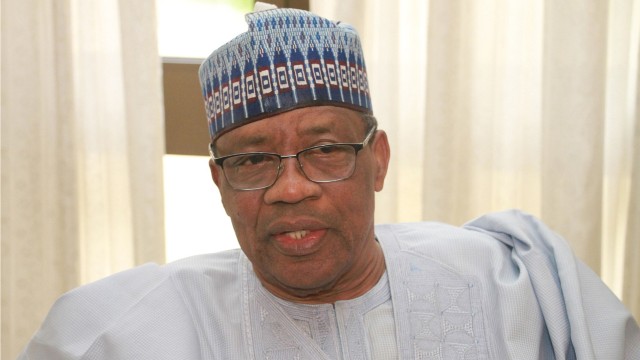 Barely 24 hours after former Military President, General Ibrahim Babangida (rtd) endorsed Social Democratic Party, SDP, for next year’s general elections, National Working Committee, NWC, of the Peoples Democratic Party, PDP, last Monday visited him in his Hilltop Mansion, in Minna, Niger State.
The Tide gathered that National Chairman of the party, Prince Uche Secondus, was accompanied on the visit by National Secretary, National Publicity Secretary, Kola Ologbodinyan; National Financial Secretary, Alhaji Abdullahi Maibasira, and National Woman Leader of the party.
The entourage was said to have arrived at the Minna airport in a chartered flight and was driven in about four vehicles to the up hill residence of the former Military President.
Prince Secondus, members of his entourage and members of Niger State Working Committee of the party, led by the chairman, Alhaji Tanko Beji, were said to have held a closed-door meeting with the former military president.
A source at the meeting disclosed that Babangida said the effort being put into the management of the party at all levels was highly commendable and would surely help the party to succeed in next year’s general election.
Part of the discussion, it was also gathered, centred on the forthcoming governorship elections in Ekiti and Osun States.
Meanwhile, the Peoples Democratic Party (PDP), yesterday, challenged President Muhammadu Buhari to stop allowing his “re-election interest to further de-market the nation.”
PDP made the call while reacting to Buhari’s remark that while politicians were preoccupied with the 2019 general election, he (the president) was more interested in the security of Nigerians.
Speaking during his meeting with the United Kingdom, UK, Prime Minister, Theresa May in London, Buhari had said, “We have elections next year, politicians are already preoccupied with the polls, but I am bothered more about security and the economy.”
Reacting to Buhari’s comment, PDP insisted that the president was “blocking Nigeria’s chances of accessing international help in critical sectors.”
A statement by PDP’s spokesperson, Kola Olagbondiyan said Buhari expressed “disservice” by sounding “brass in London instead of seeking solution for the woes the poor policies of his administration have plunged” the country into.
The statement reads, “Only yesterday, our dear nation was burdened with yet another integrity issue following claims by President Buhari before British Prime Minister, Theresa May, that he is not preoccupied with the 2019 general election, when the world is already aware that he has since kicked off his campaign.
“All over the world, well-meaning leaders relegate their personal interests, accept responsibility in the face of failure and use every opportunity to seek help and remedy a bad situation.
“Nigerians are therefore miffed that instead of presenting the true state of affairs in our country under his watch, particularly, the comatose economy and worsened insecurity, President Buhari, obviously in a bid to give an impression of performance, chose to understate the challenges, thereby jeopardizing the chances of securing much needed international support for the country.
“We are shocked that rather that engaging his international hosts on ways to pull our economy from the biting recession, President Buhari opted for self-praise, brandishing unsubstantiated record of achievements, thus stalling possible beneficial bilateral discussions and engagements in that area.
“Is it not a disservice that President Buhari is sounding brass in London instead of seeking solution for the woes the poor policies of his administration have plunged our nation into?