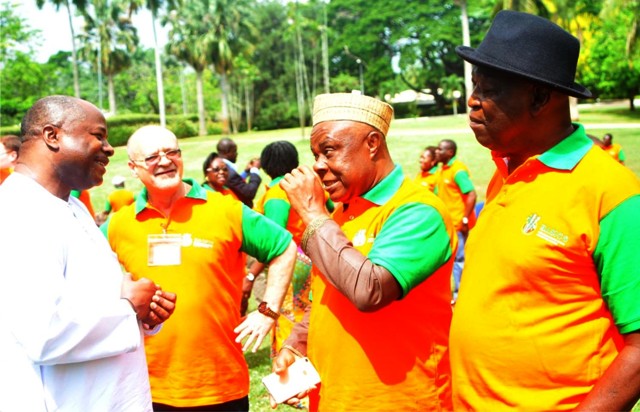 Some stakeholders yester
day commended the Federal Government for inaugurating the National Food Security Council with a call for the inclusion of farmers in the council.
The stakeholders told newmen in Abuja that the inauguration of the council by President Muhammadu Buhari on Monday was timely, saying that it would reinforce efforts to address the persistent farmers-herdsmen clashes across the country.
The National Secretary, Miyetti Allah, Cattle Breeders Association of Nigeria (MACBAN), Alhaji Baba Ngelzarma,said that the advent of the council was a welcome development.
Ngelzarma expressed the hope that the council would look into the root causes of the recurrent clashes between farmers and herdsmen, with a view to finding a lasting solution to the problem.
“The crisis has degenerated from a resource-based crisis to include other assets.
“The issue needs to be tackled holistically and I think that is what the Federal Government wants to do by inaugurating the council,’’ he said.
Pastor Segun Adewumi, the National President of the Nigeria Cassava Growers Association (NCGA), said that cassava farmers had been the main victims of farmers-pastoralists conflicts across the country.
He appealed to the council to work assiduously to tackle the crisis and boost the food security of the country.
Mrs Lizzy Igbine, the National President of the National Women Agro-Allied Farmers Association, however, underscored the need for the council to faithfully execute its mandate.
“Inaugurating a food security council is a good idea if it would work to fulfil its mandate and not end up like several other councils in the past,’’ she said.
Mr Onallo Akpa, the Director-General, Poultry Association of Nigeria, however faulted the membership of the council, saying that farmers and agricultural experts were not included as members.
“The members of the council are the same people in government who have been trying to solve those issues embedded in the mandate of the council, all to no avail.
“They are still the same people; so, I wonder the new thing they now want to bring to the table to solve these issues this time around.
“The government should have considered the appointment of members like agriculturists, farmers and other private sector individuals who are directly involved in the issues they want to tackle,’’ he added.
Mr Nnimmo Bassey, an environmentalist, nonetheless, commended the Federal Government for placing considerable emphasis on the country’s food security.
He advised the government to ensure policy coherence between the existing agencies in charge of food production and security.
Bassey urged the council to look into the recommendations of the 2014 Nigerian National Conference, particularly those relating to food and biosafety issues.
“The mandate and composition of the council is not appealing. Are farmers represented on the council?
“What will the council do with regards to oil spills in the Niger Delta? Are they to stop oil companies from polluting the environment through oil spills and gas flares?
“One pathway which agencies of the Federal Government are toeing that will subvert attainment of food security is the introduction of genetically modified crops, which is a major way of curtailing food sovereignty.
“This is because some of us believe that food security can only be achieved in the context of food sovereignty.
“It will be useful for the council to consider these points,’’ Bassey said.
Reports had that members of the National Food Security Council include the governors of Kebbi, Taraba, Plateau, Lagos, Ebonyi and Delta states