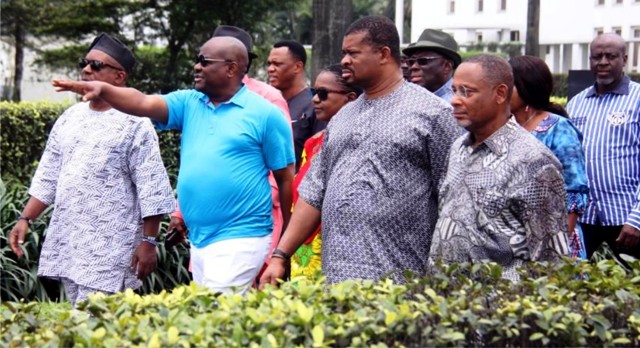 President General of the apex Igbo socio-cultural organisatioon, Ohanaeze Ndigbo Chief John Nnia Nwodo, has likened Nigeria to a jungle facing imminent collapse under the current government of President Muhammadu Buhari.
According to him, Nigeria currently does not represent the wishes and aspirations of the people.
Nwodo told newsmen that the country must be restructured, saying that the Council of State has arrogated to itself the power of the legislature.
“Now, this is our plight; does it mean that our security forces cannot infiltrate the Boko Haram? All over the world, that is the essence of intelligence. Enter the organisation with your own informant within the organisation”, he said.
“Does it mean they don’t? Does it mean the $1 billion is going nowhere? Now, the Council of State has arrogated to itself the legislative organ. The other day, they budgeted $1 billion to give to states that are prepared to give grazing colonies. This is the rule of the jungle and the country is collapsing.”
Nwodo also bemoaned the poor security situation of the country, which led to the recent abduction of some girls from Dapchi, Yobe State.
“The porosity of the security in Nigeria leaves one with a lot of disgust that I am beginning to wonder whether there is not something behind all of this.
“Boko Haram has sought for ransom before and they were given ransom; so soon after the children have been kidnapped, somebody who calls herself Mama Boko Haram said she was now being contacted.
“When you give them this money, they will use it to re-arm themselves and they will use it, come back and kill more of our troops. Is government part of Boko Haram?”, Nwodo quipped rhetorically.
Meanwhile, leaders from the three geopolitical zones in the Southern part of the country and the North-Central, last Saturday, vowed to remain resolute over their demand for the restructuring of the country.
At a mega rally held in Yenagoa, the Bayelsa State capital, they declared that no amount of intimidation blackmail and killings could deter them in their quest for a country that is based on equity, fairness and justice.
Host Governor, Seriake Dickson, joined the coalition of leaders to reiterate his call on the Federal Government to restructure the country before the 2019 general election.
Dickson, who spoke at the South-South mega rally with the theme: “Restructuring the Nigerian Federation, noted that, only restructuring would guarantee the development, unity and peaceful coexistence of the country.
Dickson, who emphasised the need for consensus building to foster better understanding on the issue and convince opponents of restructuring, pointed out that no amount of military intimidation, blackmail and wanton killings would suppress the agitations for resource control, environmental justice, equity and proper federalism generally.
While commending the All Progressives Congress (APC) for setting up the el-Rufai Committee on restructuring, Dickson, however, called for sincerity of purpose by synchronising areas of divergent views, push President Muhammadu Buhari to sponsor executive bill to the National Assembly for debate and passage by the National Assembly.
In his remarks, the special guest of honour and former President Goodluck Jonathan, urged Nigerians to closely study the recommendations of the 2014 National Conference, with a view to finding a common ground in resolving issues agitating the people.
Represented by Senator Nimi Barigha Amange, Jonathan said the call for restructuring was not misplaced, as it would go a long way in addressing the structural challenges of the country and ensure equal rights to all Nigerians.
Chairman on the occasion, Chief Albert Horsfall, urged the people to be positive and united in the struggle for resource control.
Also, the co-chairman of the Central Planning Committee, Professor Godini Darah, who described the event as a festival of unity and restoration of federalism in Nigeria, said the rally was a follow-up to an earlier one organised by the South-West in Ibadan last year.
On his part, the national leader of Pan-Niger Delta Forum (PANDEF), Chief Edwin Clark, posited that the constituent parts of the federation would do better in terms of development, if they were empowered to control and manage their resources.
Going down memory lane, leader of the Afenifere delegation, Chief Ayo Adebanjo, noted that what is today known as, the struggle for resource control was started by the sage, Chief Obafemi Awolowo, who made a strong case for the Minorities in the 1954 London Constitutional Conference.
Presenting the position of Ohanaeze Ndigbo, Chief John Nwodo, said the mass movement for restructuring was aimed at restoring the stolen sovereignty of the people from oppressive and undemocratic forces for the common good of the country.
Dr. Bala Takaya, of the Middle-Belt, also called on youths and the womenfolk to join in the task of taking back the country from the precipice.
While stressing that the Middle Belt was in the vanguard for the call for true federalism through restructuring, he said only true federalism would give a sense of belonging to all ethnic nationalities in the country and stop the ongoing ethnic cleansing across the country.
Others at the rally were a former Secretary to the Government of the Federation, Chief Olu Falae; former Governor of Plateau State, Senator Jonah Jang, former Ijaw Youth Council President, Chief Asari Dokubo, Senator Stella Omu and representatives of the governors of Delta and Akwa Ibom states.
They insisted that true federalism of Nigeria remained the ace to the nation’s stability and economic prosperity, stressing that, recent developments in the country have given credence to the fact that there is no better time to restructure than now.

Herdsmen Attacks: Defend Yourselves Or You Die -Danjuma …Accuses Military Of Conniving With Killers …Remarks, Evidence Of APC Failure -PDP