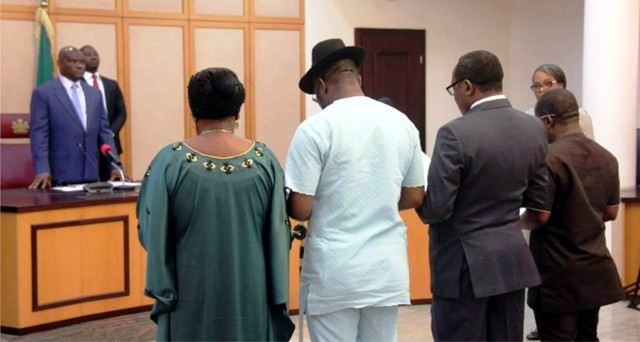 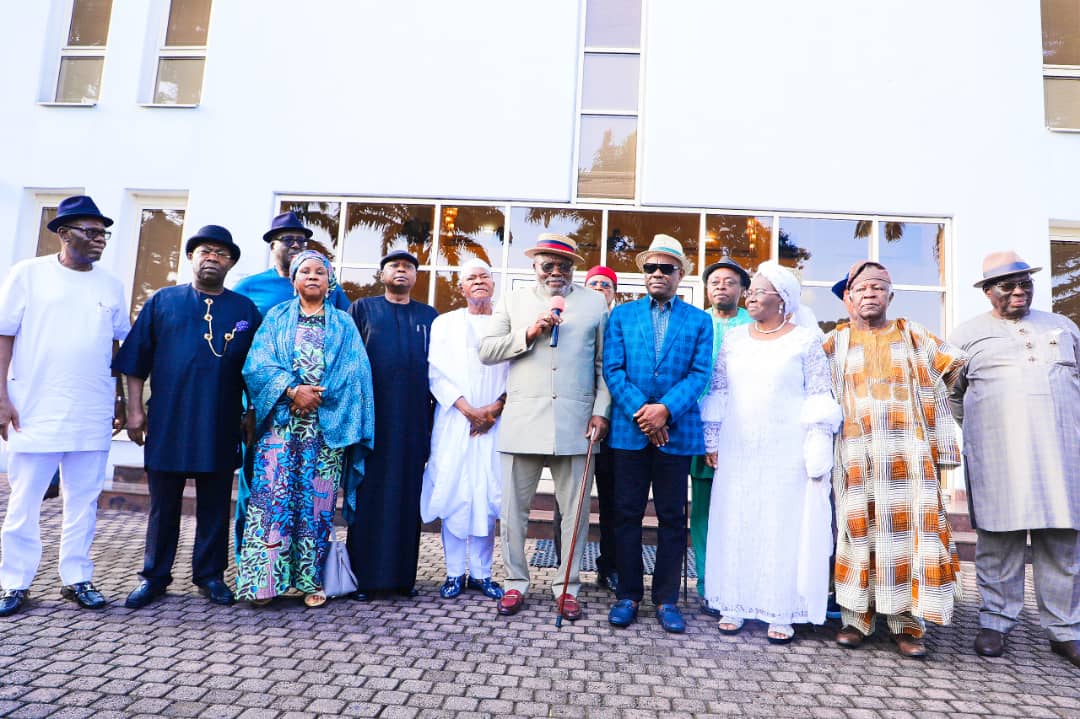 The Acting Chairman of the Board of Trustees (BOT) of the Peoples Democratic Party (PDP), Senator Adolphus Wabara, has said that their effort at resolving the lingering crisis rocking the party was a work in progress.
Wabara made the statement while briefing journalists after a closed-door meeting with the Rivers State Governor, Chief Nyesom Wike, in Government House, Port Harcourt, yesterday.
The meeting, which lasted four hours, had Dr. Ibrahim Idris; Chief Okwesilieze Nwodo; Chief Shuaib Oyedokun; Kabiru Tanimu Turaki (SAN); Dame Esther Uduehi; and Hajiya Zainab Maina; on the BOT delegation.
On the Rivers State governor’s delegation were the Rivers State PDP Chairman, Amb Desmond Akawor; Rivers Elders Forum Chairman, Chief Ferdinand Alabraba;Chief of Staff, Government House, Engr Emeka Woke; former deputy speaker of House of Representatives, Rt. Hon. Chibudom Nwuche; Senator Adawari Pepple; Elder Emmanuel Anyanwu; Senator Olaka Nwogu; and Dr. Sam Sam Jaja.
Wabara, who was former President of the Senate, said the meeting afforded them the opportunity to properly understand the concerns of Wike and were better informed about the crisis.
“We’ve been rubbing minds with His Excellency, the performing governor of Rivers State, Mr. Project. I think the meeting took about four hours.
“We have not concluded. It’s always easy to destroy but to make up, to make peace takes some time. But I think we are better informed, we have gotten some information. Every coin has two sides. We have been briefed by His Excellency. We will go back to Abuja to re-digest all that we gathered from His Excellency. We had very frank talks.”
Wabara informed that they were taking what they have gathered from the Rivers State governor back to the larger BOT house in Abuja to take a position.
“I’m acting chairman of the Board of Trustees of this party. I do not have the exclusiveness to stand here and tell you what the Board of Trustees will come up with. We have come here, we are going back, we will convene a meeting of the Board of Trustees, brief them and that is when Nigerians will hear where the Board of Trustees stands. Since it is an advisory body, conscience of the party, we will be there to tell the party the truth and nothing but the truth about our findings.”
He said, since this was the first meeting of the BOT intervening in the crisis, they were optimistic of attending to the issues as a family.
“But one good thing is that this family remains one. You know, we are still under the umbrella called PDP and by the special grace of God, we will end up very victorious and we will end up in the Villa in May, 2023 with his cooperation and support of other governors; four of them. I think we will make progress, no doubt about it.”
Wabara, who described Wike as an inestimable asset to the PDP, pointed out that ahead of the 2023 general election, the governor’s infrastructural development in Rivers State was already campaigning for the party.
In his speech, the Rivers State Governor, Chief Nyesom Wike, said what was important to all of them is to ensure that the unity of the party was not endangered.
Wike reiterated that he and his allies were not leaving the party, but are more interested that the contending internal issues be addressed adequately.
“What’s important is that the house is united for the war that is coming in front. So, for me, the issues of whether they achieved peace or not today is immaterial. What is material is that PDP is united.
“What is important is to have unity, even if it takes you longer days. I think that is the message he(Wabara) is conveying.
“We have said repeatedly that we are not leaving the party. We have said so. But that does not mean that there are no internal issues that ought to be sorted out. I think what they are here for is to see how they can sort out some internal issues.”

Following the disagreement between the Federal Government and the Academic Union of the Universities (ASUU), the Federal Government, yesterday presented a certificate of registration to the Congress of Nigerian University Academics, a separate body of academic unions.
The Minister of Labour and Employment, Dr. Chris Ngige, presented the certificate to the new union at the Minister’s Conference Room, Federal Secretariat, Phase 1, Abuja by 2pm.
Recall that ASUU has been on strike for about seven months now.
Some of the lecturers demands are funding of the Revitalisation of Public Universities, Earned Academic Allowances, University Transparency Accountability Solution (UTAS) and promotion arrears.
Others are the renegotiation of the 2009 ASUU-FG Agreement and the inconsistency in Integrated Personnel Payroll Information System.
Reacting, the Academic Staff Union of Universities (ASUU), has said the registration of two new trade unions by the government for academic staff in the university system is inconsequential and does not pose any threat to its existence.
The National President of ASUU, Prof. Emmanuel Osodeke, stated this in a chat with Vanguard while reacting to the registration of the two new unions.
“That does not in any way affect us. We are a disciplined and focused union and we know what we are doing and what we are after. Let them register as many unions as they like. That is inconsequential as far as we are concerned. We are not also in any way threatened. The sky is big enough for birds to fly.
“We know our members, we know our strength and we also know what our vision and mission are. Our members are not saboteurs or bootlickers . Our struggle is for a better educational system in the country. If the system is good, all of us will benefit and it is not only ASUU members’ children and wards that are going to benefit from improved funding and the provision of better facilities in our institutions,” he said.
Osodeke, who also reacted to the allegation by the Presidency that ASUU members are complicit in the corrupt practices in the university system, described such as unfounded.
“As a union, we have been championing transparency and accountability in the university system. That is why we are calling for the adoption of the University Transparency and Accountability Solution, UTAS, as the payment platform in the university system. Those indicted for misappropriating over N100 billion through their IPPIS, are they our members?
“Moreover, one of our demands is that Visitation Panels be set up to probe the activities and the finances of universities in the country. If we don’t want corruption stamped out, we would not be asking for that,” he explained.
In a statement signed by the National Coordinator of CONUA, Dr Niyi Sunmonu, described the registration as monumental and historic.
“The registration of the Congress of University Academics (CONUA), as a trade union in the Nigerian university system, is monumentally historic. The hurdles we have faced to get here, since 2018 when we submitted our application for registration, have been seemingly insurmountable. The registration is therefore the validation of the power of the human will. It asserts the value of courage, initiative, focus, tenacity, patience, forbearance and persistent positive thinking.
“We are immensely grateful to the Honourable Minister of Labour and Employment, Dr. Chris Ngige, and his team of diligent staff for insisting on merit, due process and thoroughness all through the processing of our application for the registration of CONUA. The very strict and dispassionate review of our application brought out the best in the membership of the union.
“We regard the registration of CONUA as a sacred trust, and pledge to reciprocate by devoting ourselves unceasingly to the advancement of university education in this country. We would make the details of our programmes available to the public in due course. For now, we are giving the assurance that we would work to ensure that the nation is not traumatised again by academic union dislocations in the country’s public universities.
“We are also deeply grateful to the numerous personalities and well-wishers whose good counsel and concrete actions have facilitated the success we have witnessed today. We believe in the saying that to whom much is given, much is expected. We would therefore constantly strive to make them all proud of CONUA.
“We appreciate the entire membership of the union for believing in the righteousness of the CONUA cause and for believing in the leadership of the union, and thereby remaining statutorily steadfast, even when disconcerting and demoralising situations arose.
“In this journey, the invaluable role of the media cannot be discounted. We are truly grateful to the media, and look forward to further mutually beneficial interactions as we strive for the development of this nation.
“Above all, we are absolutely grateful to Almighty God for granting us this grace.
“God bless you all.”
In 2016, the Obafemi Awolowo University, OAU, Ile Ife chapter of ASUU was enmeshed in serious crisis and as usual, leaders and members of the union took the matter to the national leadership for resolution.
However, instead of the crisis being resolved, some of the members felt the national leadership took sides with the leaders of the local chapter that they had grouse with.
The issues dragged till 2018 and when the aggrieved members waited endlessly for a solution that did not come, they formed CONUA.
Since it was formed, it struggled to get registered until that was done yesterday.
The body now has members in 12 universities across the country including OAU, Federal University, Lokoja, Ambrose Alli University, Ekpoma, Edo State, Federal University, Oye Ekiti in Ekiti State among others.
The incessant face-off between ASUU and the government no doubt hasten the registration of CONUA. 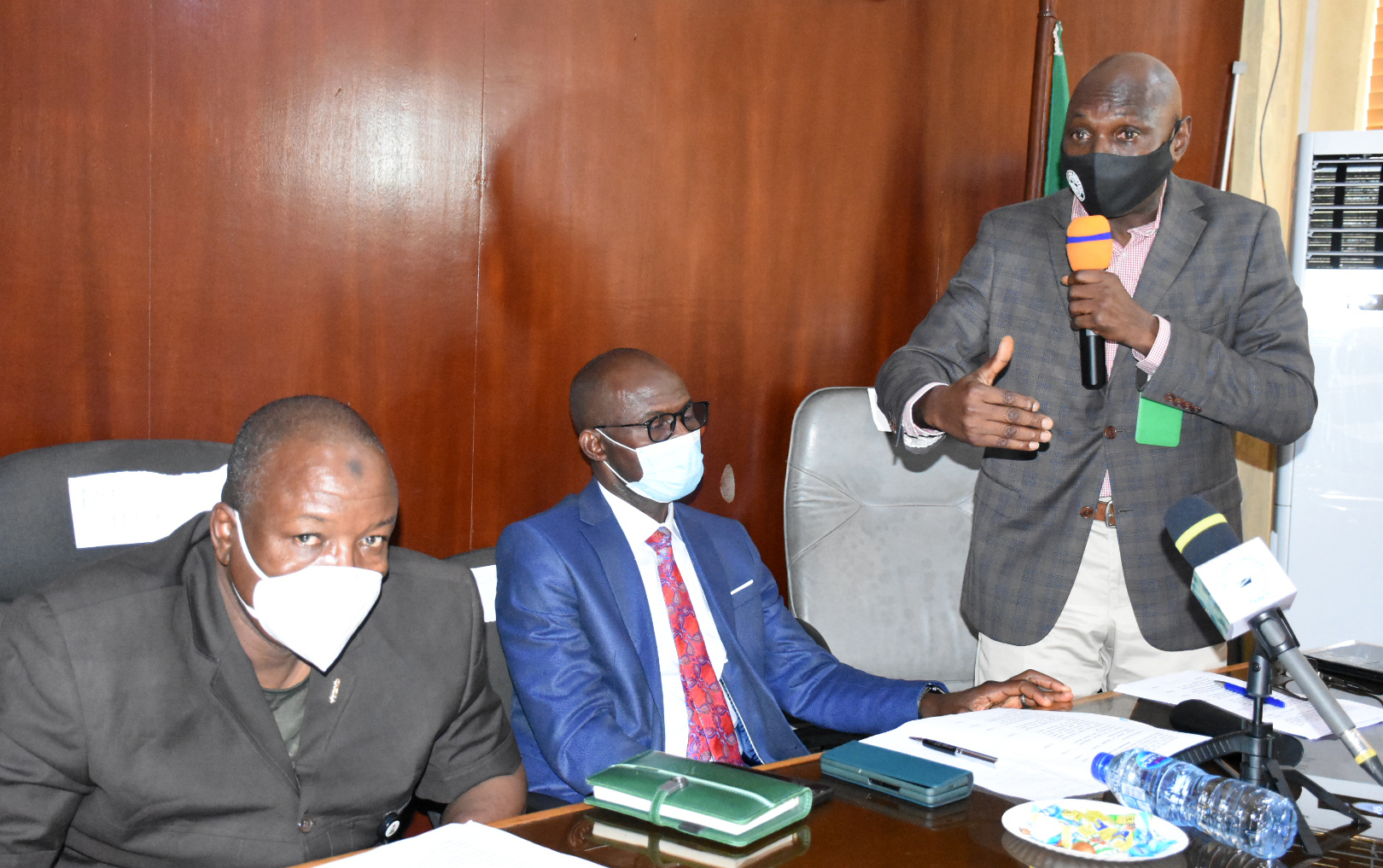